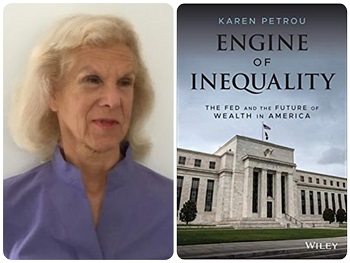 I had heard of Karen Petrou for many years, as she is one of the foremost and most respected experts on financial policy and regulation. I confess that I had pigeonholed her in my perception for being ideologically left. This was a mark, in part, of my own narrative bias. In the spirit of the free market of ideas, I sat down and read her new book, Engine of Inequality: The Fed and the Future of Wealth in America, and could not be gladder that I did. I disagree with some, am processing much, and was shocked at how little I fully understood some very core economic dynamics of our times. It is written with great fluidity and provocative and detailed data.

I was honored to explore some of my questions with the author, who says she wrote Engine of Inequality “during nights and weekends to inspire a coalition of the willing, to tackle financial policy fixes for economic equality. Happily, it’s starting to happen!”

I think “inequality” becomes one of those words weaponized across our political spectra to fit pre-concluded, even unrelated and counterproductive, policy agendas. What does the data unarguably tell us?

The data tell us that the U.S. is the most unequal of all advanced economies — a blot on our democracy and a loss to a nation that once rightly thought itself mostly comprised of middle-class households.

There is a lot of debate on how to measure inequality. What is the essence we need to focus on?

Qualitative measures of equality are inherently subjective. Indeed, “separate, but equal” was a qualitative mask for profound inequity for decades for minority Americans. I prefer hard numbers, which tell us that even communities promised a better life during the 1960s Civil Rights era are worse off on many key income and wealth terms now than before the U.S. promised equal opportunity and a fair chance.

What is the difference between “economic inequality” and “income inequality”?

Income inequality measures wages and, in good data, benefits such as Social Security. Economic equality measures income but also wealth. For example, a young person starting out in a low-wage job at a nonprofit may seem to be towards the bottom of the economic-equality spectrum. However, when you account for wealth — i.e., a trust fund, home-down-payment contribution — that same young person is far better off.

What do you mean when you say our economy has become “financialized”?

A “financialized” economy is one in which financial transactions are at least as important to GDP as manufacturing and non-financial services. The more financialized an economy, the less equal the economy because of the higher education and skills needed for success in the financial-services sector.

It seems that pretty much everything we were taught as gospel in Finance 101 is not even debated today. Do debt and deficits matter, and will they ever again instruct fiscal or monetary policy?

Everything we learned in Finance 101 was based on the U.S. as a middle-class nation, and that’s why, as I show in my book, the Fed has made so many grave, if unintended, mistakes. Fundamentally, an unequal economy does not produce, consume, grow, or support financial stability the way one with a broad, deep middle class would.

I sometimes think we will look back and say an era of zero or negative interest rates and no inflation was telling us something well before covid-19. What are the lessons here?

A great point — Alan Greenspan’s “great moderation” of low rates and what he thought was stable growth was too good to be true, and all of us old enough to know better should have.

What are the four financial-policy flaws, the four mandates, and why is it the Fed’s fault?

The four inequality flaws of post-2010 financial policy are: 1) ultra-low rates that rob savers of hope and reward speculation; 2) the Fed’s huge portfolio that fires up yield-chasing and risk-taking; 3) the “Greenspan put” that now has become Jay Powell’s, promising a strong Fed safety net beneath financial markets; and 4) regulatory policy that governs only banks, converting the financial system into one increasingly dominated by high-risk nonbanks.

Regarding economic inequality, if the data is clear, recent experience offers obvious warning signals, and there is significant agreement among global monetary and fiscal experts, why has nothing happened?

Great, hard question. I think a lot of the reason we’ve missed the critical importance of economic equality is that those of us reading this interview and making financial policy are comfortable. We are doing well, our kids have strong prospects, we own our homes, and mostly have no more debt than we can afford. Those of us not also white men experience comfort differently, but even so, it can make us complacent.

Does language — such as when “shared prosperity” sounds like sound financial policy to some and socialism to others — matter when it comes to improving these problems?

Language always matters! The principal resistance to my financial-policy fixes for enhanced economic equality comes from traditional, conventional economic thinking in which more ultra-accommodative policy is said to somehow have worked or perhaps someday will work.

You note that “the very nature of money is being redefined, along with the basic business of banking.” What is the game-changing opportunity and what worries you?

The speed and reach of digital currencies are, indeed, game-changing, but the game could be a very dangerous one for both vulnerable consumers and financial stability if new forms of money do not serve as robust mediums of exchange and storehouses of value.

There has been political hay made among the far left and far right to end the Fed. How can one focus instead on, as you write, “turning the Fed into a force for good”?

We need a central bank. Look back at the crashes throughout the 18th and 19th century to see why and how, without a Fed, only J.P. Morgan was able to save the financial system and do so mostly for himself and his friends. The best way for populists and progressives to reform the Fed is to force the Fed to adhere to its true mandate of full employment, price stability for consumers as well as investors, moderate interest rates, and markets free from Fed interference except in “unusual” and “exigent” circumstances prescribed in law.

What is the “doom loop”?

Usually, the doom loop refers to the negative interplay between sovereign debt and bank solvency. I have found another doom loop: The more financial policy makes America less equal, the less financial policy works to make the economy grow or remain stable.

What makes you most hopeful?

The American spirit of agitation and action means that we can change financial policy to increase shared prosperity, rather than create a smaller class of ever-richer oligarchs.

Christopher M. Schroeder is the co-founder of Next Billion Ventures, which backs and supports tech start-ups across rising markets. He advises some of the leading global venture-capital firms in Silicon Valley, including as a network partner with Village Global. He previously co-founded healthcentral.com and was CEO of washingtonpost.com. He authored the bestselling book Startup Rising: The Entrepreneurial Revolution Remaking the Middle East and served on the staff of Secretary of State James A. Baker III. He has written for most major news organizations and is seen regularly on CNN and CNBC. Find him on Twitter at @cmschroed and Clubhouse at @christopherm. His blog can be found on Substack.

Ru Freeman's On Sal Mal Lane begins the day the Herath family moves onto the lane. Their street, a quiet peaceful place inhabited by Tamils, Muslims and Sinhalese, is edged by lovely scents and flowering trees at one end and a busy road at the other.