An Interview with Jessica Anya Blau

The novelist talks singing in the choir, 1970s rock gods, and Mary Jane. 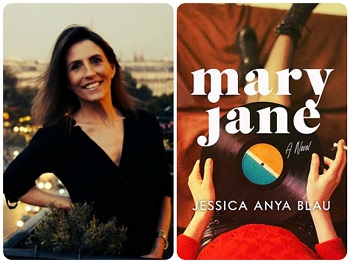 Mary Jane, the title character of Jessica Anya Blau’s latest novel, is a nice girl. She cooks with her mother, sings in the church choir, and knows the lyrics to practically every Broadway showtune ever written. At 14, Mary Jane is both a girl and an old woman.

Until she lands a summer job as a nanny for the Cone family, that is. A respectable job, according to her mother. In a respectable house, for a respectable doctor, a psychiatrist. But as soon as Mary Jane walks through the front door, she discovers that looks can be deceiving.

It's a cliché to say this, of course, but Blau’s talent for taking an old axiom and flipping it upside down and inside out is what makes Mary Jane — and Blau’s five other books — so much fun to read. And for those of us who came of age in the 1970s, as Mary Jane does, it’s a wise, funny, and beautiful snapshot of this tender and transformational time.

Over the course of a Baltimore summer, Mary Jane introduces her new household to the concepts of clean laundry, balanced meals, and bedtime stories. In turn, the Cones teach her about takeout, miniskirts, and, when a famous rock star and his movie-star wife move in, the eye-opening world of sex, drugs, and group therapy. Come September, after toggling between her straightlaced family and her free-spirited adoptive one, Mary Jane will emerge with a new version of herself and a new definition of what it means to love and accept someone, no matter how flawed.

I usually have a single image or a single idea. Always, I have a character associated with that idea. I know exactly who they are, and I know where they’re starting out. But I don’t quite know what will happen. With Mary Jane, I knew she was the summer nanny in a house where there’s a rock star and a movie star. When I wrote the opening, where she’s standing in the cluttered house with books, records, shoes, and a cactus on the stairs, then the idea that her house would be opposite of that came to me. Each moment I write leads me naturally to what follows.

There are two versions of “home” in the book — Izzy’s house and Mary Jane’s house. The people and setting in both are pretty much polar opposites. In what house did you grow up, and did you secretly long for the other?

I grew up in a version of the Cones’ messy house where the food in the refrigerator was basically unidentifiable (green fuzz growing on things, oily jars with what looked like toes or thumbs floating in them, cheese that was so unfathomably stinky, my sister would dare me and my brother to smell it, etc.). All my friends in the neighborhood had homes that more or less looked like Mary Jane’s. I wanted our house to be clean and organized like my friends’. My best friend, Debby, lived in a home with great food and a beautifully organized kitchen. Held with a magnet on the refrigerator was a single month page from a calendar on which her mother wrote the menu for the entire month. There was always a main, two sides, and a dessert. On Sunday, it said “Smorgasbord” because they went there for dinner on Sundays. I loved how orderly this system was. I frequently took down the month’s menu from the fridge, stood in the kitchen, and read it. I can still see Debby’s mother’s perfect, square script.

Your books are so autobiographical. Which character in Mary Jane comes the closest to an actual person from your life?

Mary Jane is me internally. Me in a different neighborhood and with a different family (I grew up in the suburbs of Southern California). Mary Jane loves showtunes, and I’ve always loved showtunes. She loves singing in her church choir. My family is Jewish, but when I was in eighth or ninth grade, a friend who is Mormon asked me to join their choir because they needed more people. I joined and absolutely loved singing in the church. I never told my parents; I don’t think I told anyone. Also, with that same best friend who had the meal calendar on the fridge, I sang Christmas carols every year. They went to a caroling party each December and always brought me along. It was, for me, the highlight of the season.

What was the genesis of the book? Was it a childhood dream to nanny for a rock star and a famous actress, or was this another dip into your real life?

I was told a story once of someone famous being hidden on a third floor over a summer. When I heard the story, I thought that would have been my dream at 14: to secretly hang out with a rock star, a movie star, and a cute little kid all summer. So, it was a nugget of something I had heard written through a fantasy of how that would have played out for me (if I were a totally different person in a different time and place!).

You write so beautifully about girls on the verge of womanhood, capturing the wistfulness and longing and confusion like no one else. Why is 14 such a tender and important age to cast and explore? What is it about that time in life?

It might be earlier now, and certainly it’s later for many people, but generally speaking, it’s an age where you start to redefine yourself outside of your family. You’re out of the home more and you hear, see, taste, and try new things. And when you find things you love that aren’t what you’re used to at home, you start to rethink yourself or redefine yourself by what you like. Punk rockers of the 80s are the extreme version of this (i.e., I like this music; therefore, I’m a guy who wears a black, studded-leather belt and gels his hair into a blue mohawk). For Mary Jane, it’s much simpler. She doesn’t reject the church or the church choir. And she doesn’t even reject domestic work, like making dinner and ironing. But she does discover a new way of seeing the world, she discovers a new way of understanding what sex is, and she finds new music. She starts to see herself as someone who likes rock music and someone who sings rock music.

How did you write Jimmy? Is he based on an actual 1970s rock god? If you were to cast the movie, who do you see playing Jimmy and Sheba?

I read Keith Richards’ memoir when I was writing, but Jimmy is definitely not Keith. I did take some of his internal life from that book — wanting to just play guitar, wanting only enough money to buy new strings and a pick, wanting to check out and escape through heroin — but the rest is simply creation. Jimmy’s a kindhearted Southerner who loves all people and doesn’t care about fame. Jimmy’s 33 in the book, and Sheba’s probably around the same age. One of those cute boy-band guys could play Jimmy, right? Like Harry Styles with his hair dyed blond. For Sheba…Hailee Steinfeld? Zendaya? Emma Watson? It would be so fun to really cast it!