An Interview with Jay Parini

The biographer recounts his chronicling of the irascible, inimitable Gore Vidal. 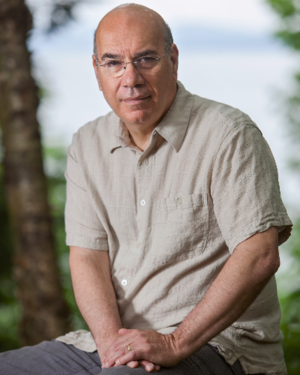 It’s no news flash to say that the human heart is awash in contradictions. It’s just that some people are more interesting about it than others. Exhibit A: Gore Vidal, one of America’s pre-eminent and most controversial men of letters. The Lincoln author died in 2012 and left in his wake a dazzling body of work, a slew of angry relatives, and, at the end, the sketchy portrait of a man constantly at war with the world — and himself.

Vidal’s been the subject of two recent documentaries and a host of books focusing on different aspects of his life. Now, novelist and nonfiction writer Jay Parini has weighed in with what’s being billed as the definitive look at a man who may be impenetrable: Empire of Self: A Life of Gore Vidal.

Parini worked alongside Vidal for nearly 25 years as literary executor, sounding board, and finally, biographer. Famous for his feuds and notoriously thin-skinned, Vidal had only two real relationships he did not ultimately destroy in his 86 years on our planet: with his longtime partner, Howard Auster, and Parini.

Controversial even in death, Vidal shocked his family by leaving the bulk of his estate to Harvard University, one of many higher institutions he’d openly disdained for decades. The decision had a number of ripple effects. For starters, he’s not buried yet, though Vidal carefully and publicly selected Rock Creek Cemetery in Washington, DC, as his ultimate corporeal destination.

The family is contesting the will, though Parini believes Vidal was in his right mind and knew exactly what he wanted to do. As of this writing, Vidal’s remains remain, as it were, subject to a tangled web of lawsuits and counter-lawsuits. Biographer (and Washington Independent Review of Books board member) Kitty Kelley is working to get to the bottom of the story. We can only wish her luck and eagerly await the results.

I spoke with Parini in early October as his book was about to hit the shelves.

It was poignant to read in your biography how much L. Frank Baum’s Oz books meant to Vidal as a child. According to his personal assistant, The Wonderful Wizard of Oz was the book he was reading as he lay dying. It suggests a sentimental streak one wouldn’t normally associate with him.

Yeah, I think he had a huge sentimental streak. He loved those children’s books. He read them, actually, throughout his life. He’d go back to The Wizard of Oz. He’d go back to the Tarzan books. He loved that kind of thing. The sentimental streak finally blossomed in his affectionate remembrance of his childhood friend Jimmy Trimball, who was killed in Iwo Jima. I think there’s a sentimental streak that most people wouldn’t know was there. [Note: Vidal and Trimball attended St. Albans School in Washington, DC, in the 1930s.]

I consider myself a quasi-Vidal expert, though I learned dozens of things from your biography. For example, I had no idea he was a practitioner and aficionado of ballet. It’s hard to imagine him jumping around in those tights.

Well, you know, Gore was obsessed with ballet. He was completely crazy about ballet. In the late 40s, he attended the ballet in New York regularly. But he himself loved doing it. It was partly to try and limber himself up because of the arthritis he suffered during World War II. He was a very stiff man, physically.

He’s such a man of contradictions, e.g., leaving his money to Harvard. He also insisted he was never his own subject until he wrote his first memoir, Palimpsest. In point of fact, as you know perhaps better than anyone, his life and personality are thick, unbroken ribbons running throughout his work. He’s everywhere, starting with The City and the Pillar, his early novel about a homosexual relationship echoing his connection with Trimball.

He frankly wrote about nothing but himself.

You discuss his extreme narcissism in the book. He destroyed so many relationships when he didn’t like what someone said about him. How did you survive, as it were?

Yes, it was kind of always a bit shocking to me. Gore poisoned every relationship he had because the only two people who got along with him to the end were Howard and me. Let me tell you, it was not easy because he was a very trying person at times. But I always figured it was worth it because, first of all, I had deep affection for him and felt like he had been kind to me.

There were two Gore Vidals: the angel and the monster. I saw both. He had very thin skin. He could get quite hysterical when he was attacked. He got very, very angry with people. He would rage. But he could be very affectionate and loving and generous. I enjoyed his company. We talked on the phone two times every week for a long time and sometimes every day. He was somebody whose voice was in my ear all the time.

I recently interviewed Thomas Mallon, a fellow historical novelist and one-time editor of Vidal’s at GQ. He remarked that Vidal was always nice to him, but he was glad he didn’t get to know him better because it probably had nowhere to go but down.

I think many people realized that a brief encounter with Gore was probably marvelous but an extended encounter was going to be hard work and would probably end very, very badly.

Yet another contradiction: At the end of the 2013 biographical documentary “The United States of Amnesia,” Vidal is asked what he wants his legacy to be. He puffs himself up and says, “I couldn’t care less.” In fact, he cared a great deal, right?

Yes, he cared a great deal about his legacy. Why else would he have basically given me a tour of his life for so many years? He asked me to write his biography. I worked on this book over 25 years. Gore knew I was doing it. He would say, “Mention the potholes but stay on the main road.” Here and there, I would read bits and pieces or mention something I’d written. I remember once he said, “I hope I’ll be dead when this comes out.” I said, “You will be. You will.”

Michael Causey, a past president of Washington Independent Writers, met Gore Vidal once and spoke with him for nearly 60 seconds while praising his National Book Award-winning United States: Essays 1952-92. “The publisher tells me it weighs three pounds,” Vidal said as he scribbled his autograph and got ready for his speech at the National Press Club. Causey’s other desert-island Vidal books: Burr, Julian, and Creation.

A Q&A with the author of Columbus: The Four Voyages.