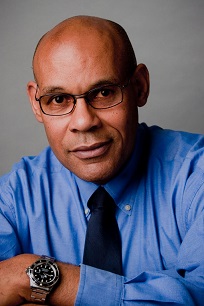 The New Negro: The Life of Alain Locke by Jeffrey C. Stewart is the immensely readable biography of the father of the Harlem Renaissance. Locke was the first African-American Rhodes Scholar, earned a Ph.D. in philosophy from Harvard, and studied philosophy at the University of Berlin with, among many, the well-known philosopher Georg Simmel.

At almost a thousand pages, every chapter of The New Negro is a tutorial. Stewart gives the reader a detailed view of life in the early 20th century with full-on portraits of black Victorianism, Harvard, Oxford, and the nuances of leadership through Locke’s engagement with Roscoe Conklin Bruce, Roland Hayes, Booker T. Washington, and W.E.B. DuBois.

Stewart’s The New Negro is the story of an extraordinary gentleman who transcended his time and cultural hegemony and its stricture around the lives of African Americans. His biography belongs in every library and American-history classroom. The author and I spoke recently.

I do think that biographers are engaged in a balancing act between adhering closely to the primary sources like letters but also having to use their imagination to see their subject almost like a character in a movie, if nothing else to ascertain a subject’s motivation. With Alain Locke, there is the additional complexities of the life of a man full of contradictory impulses and desires whose own life is a complex balancing act. I felt I had to ruminate on many aspects of his life — and especially criticisms of him during his life and afterwards — in order to do justice to him and his context.

The opening pages read like the man is the precursor of Norman Bates. What made you begin the book with his mother’s memoriam?

I wanted to introduce the reader to Locke by showing the intensity of the most important relationship of his life, that with his mother. I also wanted to show how the attention to detail that he went to in her wake was also symbolic of the power of that old black Victorian culture she had given him, a culture that used codes of behavior and fastidious ritual to protect itself against racism and disorder. Working on the voluminous, almost daily letters between Locke and his mother, I came to feel that she had to die in order for him to be reborn. And the theme of rebirth, which is a central message of his life and black culture, is symbolized by his reinventing himself after her death in order to fulfill his life’s mission.

This reader kept waiting for a letter to arrive with an Oxford postage stamp. Did the Rhodes Scholarship Oxford Academy ever recognize or celebrate the genius of Locke?

There have been several such celebrations. Also, recall that it was Rhodes Scholars who discovered Locke’s ashes resting on a shelf at Howard University and worked with its Rhodes Scholars to orchestrate a proper burial in Washington, DC.

Early in the book, there is a phrase about truth not standing outside of a person but being the result of action. This speaks to society as a moving, changing organism along with Locke’s ideas of race as a changing construct, a relationship to power. He thought of “society as a social organism” — has this, his original theory, or his Theory of Value gained any further study?

Not yet, although there has been interest in Locke philosophically for years. I hope interest in exploring his ideas, especially on the fluctuations of racism, will be stimulated by the publication of this biography.

Horace Kallen credits Locke for coming up with the phrase “Cultural pluralism,” yet there doesn’t seem to be any wider reference. Locke’s name did not appear in the discussion of Cultural Pluralism in Wikipedia, our utmost cultural totem. (Just kidding.) Do his contributions appear in more stringent philosophical circles?

I think it’s more accurate to say that Horace Kallen stated the phrase “cultural pluralism” emerged out of his conversations with Locke. Kallen always took credit for the concept. A certain amount of segregation still exists in philosophy, such that people who write on Locke credit his work in cultural pluralism more than those who simply write on American philosophy. But I think that is slowly changing.

Constance Mason, Locke’s adopted mother, comes to mind. She believed that he wasted his genius by not producing more books about his theories. Would you agree?

Charlotte Mason was a complex friend and patron for Locke. The views you mention seem to me to sharpen after the collapse of the black literary and visual art factory he and she collaborated on creating. Running that patronage machine stole a lot of his time, and she didn’t criticize that. But what annoyed her was his obsession with speaking engagements that often were rehashes of papers he had already given and that were not going to become major publications. But I also think her criticism of him frittering away his time in popular race work helped push him to do some breakthrough work in his later years.

Locke used the writing of Shakespeare as an example to encourage African Americans to explore all aspects of their artistic selves, ushering into existence the Harlem Renaissance. Do you believe it could have happened without the “invisible” hand of Alain Locke?

I don’t think we would have the Harlem Renaissance as the durable cultural artifact it is now without Alain Locke. That’s because he supplied a crucial element — the period’s “critical temper” that gave meaning to what was and what wasn’t important through his hundreds of essays and articles. He steered the movement and, without him, it would have been rudderless.

He had so much ego to work so invisibly. Was this a part of his own make-up, black Victorianism, or more attributable to the way of the world in his day?

He instinctively believed he was better than everyone else, and black Victorianism gave him a methodology of dress, drama, and deportment that made sure everyone else knew it, too.

America’s own inferiority complex has served African Americans strangely but well. In the early 20th century, the most talented African-American artists had to achieve fame first in Europe to be recognized at home. In Europe, Locke could be his whole self: a gay, black, cultural aesthete. Why did he always come home?

I think Locke came home because he had a destiny of leadership and efficacy in America he never had abroad. Going to Europe indulged his “ocean values,” as I put it in one place in the biography. After drifting around Europe for several months, he was ready to come back on dry land at home and go to work. He usually came back enormously energized. If he had stayed abroad, I doubt we would be writing about him now.

His life is a love story — he learns to love himself and, by default, his people, or is it the other way around?

I think he learns to love himself by learning to love his people.

The conversation about propaganda and art between W.E.B. DuBois and Locke is still ongoing, maybe taken up in a different way by others. Please hazard a guess about what Locke might think about contemporary artists such as Kehinde Wiley and Yinka Shonibare, with their obvious white-cultural derivations. Would he believe that their art has transcended?

I don’t think Locke objected to “white cultural derivations,” especially if an artist used those codes to engage a black subject, as Kehinde Wiley often does. He’d like that the subjectivity of black men, especially comes through in Wiley’s portraits, and that he utilizes Chinese motifs in the background of some portraits, which themselves are templates of cultural pluralism. I think Locke wanted a balance between cosmopolitanism and one’s culture in one’s art practice, not the presence of one and the absence of the other.

What would Locke, who built a marketing and PR system for his own Bronze Booklets in the 1900s, be doing in 2020?

Flooding the untapped market of adult black readers with scholarly books like his Bronze Booklets that brought easy-to-read black scholarship to the masses in the 1930s and 1940s.

You don’t discuss his art collection until the very end of the book. Where is that collection now?

It’s at Howard University; some African art pieces are at the Smithsonian Institution Museum of African Art and at the Schomburg at New York Public Library.

A Q&A with the author of Opening Day: the Story of Jackie Robinson’s First Season.