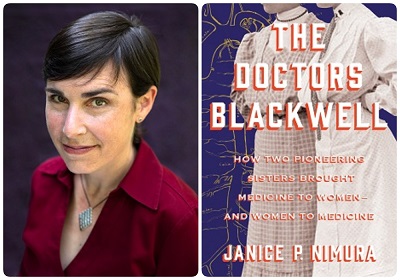 Janice P. Nimura, recipient of a Public Scholar Award from the National Endowment for the Humanities, may not have pursued her own onetime interest in becoming a physician, but her highly anticipated new book, The Doctors Blackwell: How Two Pioneering Sisters Brought Medicine to Women and Women to Medicine, explores the lives of 19th-century siblings who blazed a trail in the field of medicine.

How did you happen upon Elizabeth and Emily Blackwell’s story?

For me, medicine is the path not taken — I arrived at college pre-med and then swerved. But the fascination remained. I first encountered the Blackwell story five years ago and was astonished that I — a New Yorker, a feminist, a science kid — had never heard it before. I discovered that Elizabeth Blackwell was easier to find on the children’s biography shelf, but with her prickly complexities mostly smoothed away and little or no mention of Emily. It became my mission to reintroduce both Blackwell sisters to the present, with all their contradictions intact.

Writing a one-person biography is challenging. How did you approach writing a dual biography?

I imagine having a single biographical subject might be more difficult, rather than less! My first book focused on three young women; this time, there were two. Exploring the intense and occasionally fraught relationship between Emily and Elizabeth Blackwell was fascinating in itself, and following them through the stretches of their lives when they were far from each other allowed me to focus on them individually and incorporate new places and people. Having two subjects provided me with extra lenses and deeper vision: There was the way I was seeing each of them, and there was also the way each of them was seeing the other.

What kind of discrimination did Elizabeth and Emily face in the 1840s and 1850s as they sought medical degrees?

The very idea of women in a medical lecture hall was horrifying, if not unimaginable. Women were not supposed to think about bodily functions, let alone study them in the company of men! Elizabeth’s admission to tiny Geneva Medical College in the Finger Lakes region of New York happened almost by accident: The faculty, upon receiving Elizabeth’s query, posed the question to the students, and the students — a raucous bunch of unpolished young men — thought it would be hilarious to vote in her favor. They assumed it was a practical joke. A few years later, despite (or perhaps because of) Elizabeth having graduated at the top of her class, Geneva College refused to admit Emily. She began her studies at Rush Medical College in Chicago, but after her first term, the trustees changed their minds and asked her not to return. She eventually graduated from Cleveland Medical College, now Case Western.

You write in The Doctors Blackwell that a major fear among male doctors of that time was that female patients would only want to see female doctors if women were allowed to attend medical school. Was that fear founded?

Male physicians seem to have been more worried about their own inadequacies than their female patients were. Despite the mortification of describing intimate ailments to a man, most women — at least those wealthy enough to have choices — found the idea of consulting a woman unthinkable. In 1851, when Elizabeth Blackwell returned from her training in Europe to start a practice in New York, the phrase “female physician” was generally understood to mean abortionist, a woman operating in the shadows and in sin. Few respectable ladies would risk the impropriety of consulting anyone who referred to herself as a woman doctor. Unable to attract enough private patients, the Blackwells eventually turned to the project of building charitable institutions that served the indigent. Poor women were not picky about their doctor’s sex.

This book reads like a novel but is 100 percent nonfiction. How did you achieve that kind of narrative style?

I try to write what I like to read: a story that transports me to another time and place. I once heard another writer say that good narrative nonfiction is mostly about leaving out the boring bits. That resonated powerfully. I often feel like a magpie collecting shiny things, the juicy archival details that illuminate how people felt instead of just what they did. Sometimes it’s a particularly pungent phrase; sometimes it’s a 200-year-old doodle inked in the margin; sometimes it’s an implement or an artifact that your subject held in her hand. I like to engage all my senses in imagining the past.

Tell us about the Blackwell sisters’ influence on the teaching of medicine during their era.

Both sisters were acutely aware of the inadequacies of mid-19th-century medical education. Medical school was two consecutive (and identical) terms of sitting in lecture halls and taking notes, with a little dissection if your school happened to be well equipped. Newly minted M.D.s emerged with a truly alarming degree of ignorance; many had never touched a living patient. Often, the next step was to serve as a resident in a public hospital — but women were not welcome on the wards. The Blackwells founded their New York Infirmary for Indigent Women and Children in 1857 as a place for the slowly growing numbers of female medical graduates to receive the practical training they sorely needed. In 1869, Elizabeth and Emily added a Women’s Medical College to the infirmary, with a curriculum more rigorous and progressive than most of the schools admitting men. The Blackwells’ students learned at the bedside as well as [by] attending lectures and pursued a course of study that built on itself and lasted three years instead of two. On top of the usual subjects, the Blackwells added hygiene, orienting their graduates to emerging questions of public health.

The sisters had very different interpretations about what it meant to be a woman physician, correct?

Within a year of her graduation from medical school, Elizabeth Blackwell suffered an illness that led to the loss of one eye. Practicing surgery was now out of the question — but this limitation only sped her in a direction she was likely to have pursued anyway. Elizabeth came to believe that the role of a female doctor was as a teacher armed with science; she spent far more time writing and speaking about women and health than actually practicing medicine. Emily, once set on her medical path by Elizabeth, proved to be the more natural scientist and practitioner, a skilled surgeon and revered medical professor, always interested in new breakthroughs in medical technique and theory.

Elizabeth and Emily were anti-suffrage. How could that be with their pioneering viewpoints on women in the medical profession?

The Blackwells weren’t exactly anti-suffrage — they just didn’t believe that the vote should be the first goal of the women’s movement. What good was a vote, they argued, if a woman’s decisions and assets were still controlled by her father or brother or husband? The first item on the agenda, Elizabeth insisted, should be to help women claim their independence. Then, and only then, would the right to vote be meaningful for them.

At one point, Emily told Elizabeth: “The point was not to be the first female M.D.s, but the first of legions.” This reminds me so much of Kamala Harris and her mother’s advice to her: “You may be the first to do many things, but make sure you're not the last.” Did Elizabeth agree with her sister on this issue?

The short answer is yes — both Blackwell sisters devoted their lives to promoting the idea of female medical education. But Elizabeth was the first female M.D., and she relished that distinction. Emily did not have that claim to fame, and whether because of that or in spite of it, she was far more willing than her older sister to submerge her ego and train the next generation of women doctors.

What would the sisters think about how the covid-19 pandemic has been handled?

[Editor's note: Janice P. Nimura will appear at the all-virtual Gaithersburg Book Festival on Fri., May 7th, at noon (EDT).]