An Interview with James M. Scott

The writer talks WWII, the firebombing of Tokyo, and the usefulness of karaoke booths. 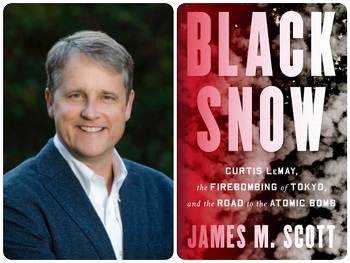 Over the past decade, Pulitzer Prize finalist James M. Scott has established himself as a skilled and prolific researcher and writer in the crowded World War II history space. His latest book, Black Snow, tells the story of General Curtis LeMay’s March 1945 firebombing of Tokyo and the B-29 air campaign that culminated with the atomic bomb strikes on Hiroshima and Nagasaki and the surrender of Japan.

How did Black Snow come about?

I first researched the firebombing of Tokyo a decade ago when I wrote my book The War Below, which told the story of American submariners who were held in a Tokyo-area prisoner-of-war camp. Those prisoners not only witnessed the firebombing but also had to help clean up the carnage afterward. Even though, at that time, the story amounted to just a few pages in my book, I thought then that I really needed to one day revisit the story of the raid.

The raid fascinates me on a couple of levels. First, it was one of the most destructive strikes of World War II. In one night, America incinerated 16 square miles of the Japanese capital and killed more than 100,000 men, women, and children. That’s just a staggering level of destruction. Beyond that, it was also a major moral turning point for America. Up until that moment, American commanders resisted the intentional killing of civilians. All of that, of course, changes with that one operation. From then until the end of the war, America proceeded to burn dozens of Japanese cities and towns, culminating with the atomic attacks on Hiroshima and Nagasaki.

Curtis LeMay is a complicated character on which to hang a narrative. After examining his management of the B-29 campaign and his fateful decision to abandon high-altitude “precision bombing” in favor of low-altitude incendiary raids on Japanese cities, what are your big takeaways on LeMay as a military leader and a person?

It’s unfortunate how much the latter part of [LeMay’s] career overshadows the tremendous work he accomplished as a young combat commander. He was trained as an engineer, a problem solver, and he applied those skills to great effect in both Europe and the Pacific. People don’t realize how much LeMay gave of himself to the war. In reading through his personal letters, you can’t help but notice how often he writes of his exhaustion. He was a dogged commander, working often on as little as four hours of sleep a night.

He was in his 30s and had a young family that he rarely saw. In fact, when he came home briefly at one point, his daughter insisted he sit on the porch swing one evening in the frigid cold just so she could prove to other children that she actually had a father.

You do a masterful job in Black Snow of recreating the lives of people on the ground in Tokyo, people who get caught up in the devastating raid of March 9-10, 1945. Talk about your decision to make the stories of Japanese figures a pillar of the book.

Too often, history focuses on only one side of the fight. That has long been the case, too, in describing what happened to Tokyo. For this book, I really wanted to capture the experience of Japanese civilians — to take readers into one of the worst firestorms the world has ever seen. I wanted to know what that experience smelled like, felt like, and sounded like.

Therefore, as part of my research, I spent several weeks in Tokyo interviewing survivors, who were incredibly gracious with me. Many of them not only shared their personal stories of that awful night but provided haunting letters, photographs, and personal artifacts. Through them, I was able to at last capture that reality of what it was like on the ground and show the often-overlooked human perspective of the attack.

Any unusual researching or writing challenges that arose while working on Black Snow?

As many people know, karaoke is a very popular form of entertainment in Japan, and such establishments have wonderful soundproof booths that are like living rooms with plush sofas, tables, and boasting food and beverage service. I discovered while researching Black Snow that karaoke booths also provide terrific neutral ground to conduct interviews. Many of my interviews were several hours long, and karaoke booths provide a quiet and comfortable environment to chat over tea or even a meal.

How do you write your books? Do you start writing before you’ve finished researching? Do you prefer seclusion or a public space? And do you have a daily word count or number of hours you try to work?

I am fortunate that I have a wonderful home office. We live in a Victorian house [in Mt. Pleasant, South Carolina] that was built in the 1890s. When we renovated it, we turned the cupola into my office. I log a full day in the tower. I typically write in the mornings when I am fresh and then work on citations and research in the afternoons.

I have learned over the years to start writing early in the research process. Writing, in fact, is often how I discover the various holes in my research that invariably send me back to the archives. Starting early also gives me time to develop the framework of a book. I then frequently go back and layer in new information as my research develops.

Have you started on your next book?

I have! It picks up in many ways where Black Snow leaves off. I am doing an in-depth examination of three pivotal days of the war in August 1945, when America, in the span of just 72 hours, obliterated two cities. Like Black Snow, I want this book to offer a kaleidoscope of perspectives from American politicians, commanders, and airmen to Japanese leaders, shopkeepers, and even children. Stay tuned!

Gregg Jones is an award-winning investigative journalist and international news correspondent. He has been a Pulitzer Prize finalist, a fellow at the Kluge Center and Black Mountain Institute, and a Botstiber Foundation grant recipient. He is the author of three acclaimed nonfiction books: Honor in the Dust: Theodore Roosevelt, War in the Philippines, and the Rise and Fall of America’s Imperial Dream; Last Stand at Khe Sanh; and Red Revolution: Inside the Philippine Guerrilla Movement.

An Interview with Niall Williams

Like snuggling in a comfy chair with a good book and a cup of tea, Niall Williams’ History of the Rain is a delicious treat for readers.