An Interview with Hanna Jameson

The novelist talks dystopia, society's shortcomings, and why she's not an archeologist. 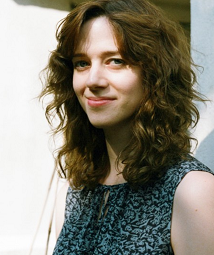 In The Last, Hanna Jameson proposes a scenario that’s beyond terrifying: the world as we know it ends while the novel’s protagonist is far from home and his loved ones.

The early chapters are short and abrupt, reading almost like telegrams. “I’m not sure anybody is coming,” historian Jon Keller, Jameson’s main character, writes in a journal. “I feel nauseous. I can’t tell if it’s radiation poisoning or not.”

Jon is at a conference in Switzerland when the nuclear disaster happens; 20 others are trapped with him in a hotel that has its own dark and turbulent past, reminiscent of Stephen King’s Overlook Hotel in The Shining.

But the dystopian plot for The Last wasn’t what Jameson originally had in mind. “I had 14,000 words for a murder mystery written, and the central character kept changing,” she explains.

“But the story wasn’t really exciting me. Then, something a historian friend said when he was traveling made me think, ‘God, what if during a commute something happened that was cataclysmic?’ We always imagine that if something like that happened, we would be somewhere familiar with people we could make some kind of plan with. But what if it happened when you were displaced?”

Jameson thought that writing the story from an historian’s point of view was an interesting concept. “He’s a detective in a way, and someone who would be very conscious of how things got to that point,” she says.

Becoming a writer was on Jameson’s mind from age 6 or 7, when she penned her first story, about a dog (or perhaps a wolf) who kept returning to a clearing in the woods to watch the flowers grow.

“I was very pleased with myself on using the word ‘occur’ because I had only just learned what it meant,” Jameson jokes. “Somehow, I managed to make it to 18 without anyone telling me being a writer was a bad idea.

“The only other thing I wanted to do was be an archeologist, but when I found out what the job really entailed, I let that go rather quickly. Then, when I was 16, I wrote an espionage sort of thriller, but I never showed to anyone or sent it anywhere, which was probably for the best.”

For The Last, Jameson drew on the endless stream of headlines available on social media. “The news cycle is so present in my mind, and I don’t know how other people deal with it because I can’t even explain how I’m dealing with it,” she says. “It’s more information than the human brain can process…[and] people are not processing any of this in an emotionally healthy way.”

She adds, “It’s terrifying how fast we’re heading towards the destruction of civilization. The combination of who’s talking and who’s not talking is pretty scary to me.”

So, would civilization devolve quickly if the events in The Last came to pass? Yes, Jameson believes. “The foundations of so much about society are based on savagery. I think how we live in the U.S. and the U.K. are prime examples of this. Settlers coming in and eradicating a whole culture, which is how the U.S. was built in the first place. How our governments treat the disabled, people of color, and women shows how certain groups of people have to deal with everyday savagery.”

In fact, Jameson thinks The Last has a more optimistic outcome than the one she imagines might happen in real life. “It’s the breakdown of everything, but throughout the novel, there are examples of cooperation and the formation of new relationships…I also wanted to explore what humans could build in place of the old society that could be better.”

The author’s current projects include another novel and an historical drama for television. About the forthcoming book, she’ll only reveal that “it’s still dystopian, but more near-future dystopia, with possibly a dual narrative. That’s all I can say for now, because I’m a little superstitious about revealing too much information about works in progress. But I’m really excited about it.”

An Interview with Monica Hesse

The Washington Post reporter and YA novelist talks about her latest book, the WWII-era Girl in the Blue Coat.