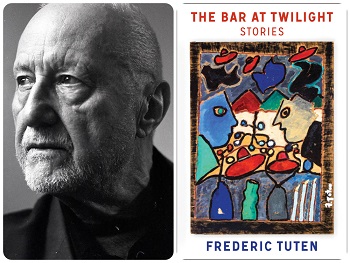 Born in the Bronx, Frederic Tuten has had a long, important career as a writer of fiction and criticism. He is the author of five novels, two story collections, a memoir, and the screenplay for the cult film “Possession.” Tuten has also published numerous essays on art and recently had gallery showings of his own paintings, including a solo show of his work at Harper’s in New York. Here, we discuss his recent story collection, The Bar at Twilight.

The way your characters surround themselves with art, music, and culture of all kinds is similar to how you live your own life. Is it fair to describe your fiction as an aesthetic autobiography?

All my fiction is autobiography, in the sense that I inhabit all my characters, and they me. The young French revolutionary Tallien, the artist Van Gogh, the art historian Tintin, the boy adventurer Dominique — all me at the core of their desires and their sensibility, their longing for life. I must not forget to include Snowy, Tintin’s mischievous dog.

There are a number of cats in The Bar at Twilight. Their presence (and absence) is powerful and their impact is almost spectral. Do cats have an emotional or symbolic presence for you?

Actually, there is always the same cat in all my novels and stories, Nicolino. In life, he was my brother. I still miss him all these 40 years and so I bring him back in my fiction. It’s my homage to him and my wish to see him pounce again, and I do so when I write him into my pages. In this way, we continue to have many adventures together.

Couples in these stories discuss Cezanne and Proust, Godard and Beethoven with the wit and humor of the great screwball comedies. Do you see yourself working in the space between what we sometimes still refer to as high art and popular culture?

I relish what Whitman calls “the blab of the pave.” The strong, unaffected, unselfconscious language of daily life and the tough talk of noir fiction — which, finally, is deliberate invention, an artifice after its own effects. I like sometimes to mash the blab and the noir with high-toned diction and five-dollar words, which now, with inflation, are $50 words.

While you don’t write in genres, you frequently borrow elements — from surrealism and noir, for example — mixing them together so that a blue horse will tend bar in an otherwise realistic story. What draws you to that mix?

I like the fun of doing the mix. Henry James says that the House of Fiction has many windows. Mine has three or four. It’s boring to look out at the same window with the same view all the time.

Several of the pieces in The Bar at Twilight were originally written for the catalogs of contemporary art exhibits. How do you see fiction and visual art illuminating each other?

I will write where I’m wanted. That is: Have gun — will travel. Many of those stories were commissioned by galleries, and I knew that I could write whatever I wished without fear and without having to send [them] to literary magazines, with their constraints and particular partialities and without waiting for a year or more to be published — if the story is taken at all.

Five novels, two short-story collections, a memoir, and a film script. Is there a work you’re most fond or proud of?

Tintin in the New World because it was the longest to give birth to. I carried this child over 16 years. Tallien: A Brief Romance was written and published in that time. Also, because Tintin was my most scorned and most rejected novel when it was making the publisher’s rounds, there was a small victory once it came to light — good reviews and many translations. So, for me, there was a warm feeling of “I told you so.” You remember most whose existence you most fought for.

You set out as a young man to be a painter and have recently returned to painting with gallery showings in East Hampton and Manhattan. At the risk of judging a book by its cover, it must feel like a special accomplishment to have your own painting on the cover of The Bar at Twilight.

I wanted to be a painter when I was 15 and dropped out of high school with the dream of living in Paris with other artists and poets and the like. I wrote about this in my memoir, My Young Life. I started showing my color drawings to Roy Lichtenstein about 35 years ago, and he was profoundly encouraging. I had two solo shows of them over the past two years, followed by a solo show of my paintings in New York this May.

I was flattered that my publisher, Bellevue Literary Press, asked me for a drawing for the book jacket. Whatever its merits or lack of merits, I think it is striking, as a book jacket should be. A book of my drawings with a story for each is out this August: On a Terrace in Tangier. So, all I had dreamed of has, at this late age, found a welcoming corner in the world.