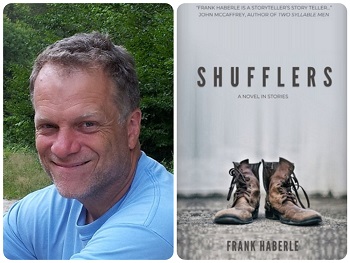 Frank Haberle is a Brooklyn writer whose short stories have appeared in more than 30 magazines, winning awards from Pen Parentis, Beautiful Loser Magazine, Freshwater Review, and the Sustainable Arts Foundation. Spare, funny, and brutal, his writing has been compared to the work of Denis Johnson, Charles Bukowski, and Hubert Selby Jr. Shufflers, his first novel, uses linked stories to narrate the travels of Danny, an itinerant temp worker and alcoholic struggling to find footing in Ronald Reagan’s America.

Shufflers is a novel in stories. Many of the stories stand out, but there’s a strong overall narrative. Did you set out to write a novel, or did the stories come first?

At the beginning of quarantine, I started pulling things out of notebooks I’ve been scribbling for years. I patched these stories together with some earlier stories, and it seemed to come together. Suddenly, there was this guy, Danny the Shuffler, traveling through a logical progression. He was trying to get somewhere even as his life kept falling apart. It took months to bang it into a sequential narrative, but when I finally spot-welded it together, it felt like a novel.

The portrait of work in the novel is grimly comical — jobs like emptying a warehouse of old Charlie McCarthy dolls, bosses and coworkers who are either clueless or hostile. Is that a function of the setting in the Reagan economy of the 1980s? Or is that just the life of a shuffler?

A “shuffler” is [a] derogatory [term] for people who barely show up for low-wage jobs. In my mind, though, it’s a person who’s given up, who just shuffles around aimlessly, who takes the lowest position in life. Danny struggles through the book to find connections, motivation, aspiration. I wanted to go for the real 1980s Reaganomics vibe in this book. I remember a temp agency in Boulder sent me to a roofing company, and they gave me a pitchfork [and] told me to climb a ladder three stories up and pry the roof off a house — in the snow! Then they fired me because I wasn’t using two hands — I was holding on for dear life! Some people think of the 80s as Molly Ringwald and Matthew Broderick driving their dad’s car to high school, blasting Huey Lewis. They might have a hard time wrapping their heads around staying in a backbreaking job that seems pointless and pays $3.35 an hour with no benefits and no job security.

Ironically, Danny often ends up being good at these jobs. For instance, without any real effort, he becomes a supervisor at a ski resort.

Danny has a gift for putting things together and gains competencies. The ski lift is his one promotion, but another example is when he’s chopping firewood and he gets into it. He masters skills as he goes along. I, personally, was really good at carpet cleaning and dishwashing but really bad at construction and painting. The best job I ever had was assembling bedroom furniture with a great friend. The pay stunk, but we had a lot of fun.

How do you come up with character names like Stickman, Booch, Lapper, Raincoat Steve, Mister Patio, Hawk, Hot Dog, the Governor, and, of course, Cashtown Annie?

I’d love to say I made these names up, but I didn’t. In my travels, I knew a Mister Patio, a Booch, a Hawk, a Hot Dog, and a Governor. I borrowed “Lapper,” Boston-hockey slang for a slapshot. Cashtown Annie is unique in that she goes through a complete transformation when she reappears and has dropped “Cashtown.” Sis, Bobo, Lenny, and Squid really existed, but they were in Gloucester — I was parked with three friends by the lighthouse one night smoking a doobie, and they parked next to us and wanted us to share their drug arsenal. They were terrifying. I was happy to write them into the book as co-workers in a nicer, safer, fictional setting.

People treat Danny harshly, but there are moments of kindness — like from the man who gives him hot chocolate. Do these simple kindnesses mean this isn’t such a dog-eat-dog world?

Ultimately, I think Americans are incredibly kind and generous, and Americans love an underdog. Danny is a character that people take to even when he doesn’t take to himself. Danny is an affable, endearing screw-up. He asks very little of people.

Amidst the wandering, there are trips that become quests, ending with Danny’s final search for his brother. What is Danny really searching for?

Danny is looking for people to find him dependable — and the strangers he rides with need Danny to find them believable. In the final search for his brother, he’s aware that it’s his last chance to break out of the whirlpool of desperation — and then he almost sabotages himself anyhow. The influence of alcohol in Danny’s life is immense because it’s one of the key factors trying to keep him down. He realizes this and he fights it off, but it comes back for him anyway.

Danny’s world is overwhelmingly male. He has an important relationship with Annie but never seems interested in a romantic one. Why not?

I deliberately avoid romantic attachment for Danny because romantic love requires self-love, and because he knows that the day he finds himself in a meaningful relationship, he will no longer be lost. Annie is an exception only because Annie is more lost than he is. The girl on the bus, the girl in the cannery, [and] Stickman’s sister are all idealized in his head. When he fantasizes about them, he can barely imagine having a conversation. You can’t have a meaningful relationship when you are a successful alcoholic. Alcohol will figure out how to break it up quick.

Shufflers manages to be both unrelentingly grim and laugh-out-loud funny. What drew you to put so much humor in this world of woe?

When I tell my kids stories about what my world was like when I was young, I make sure they’re funny, because if they weren’t funny, they’d probably be unbearably sad. Danny picks up on crazy things people say, the ridiculousness of his struggles, the strange abstraction of everyday objects and events. Danny needs to get a message. He is constantly surrounded by messengers, but he never really gets the message.