An Interview with Fay Weldon

The bestselling British author discusses plot, the changing times, and why writers must rein in their characters. 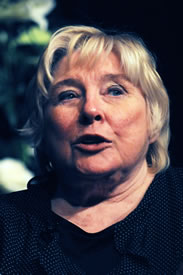 Fay Weldon is the author of 36 novels, numerous screenplays, poetry, and more. She wrote the first script for the popular television series “Upstairs, Downstairs” and still teaches, keeping herself busy and challenged in her ninth decade. Her novels The New Countess (the final book in the Love & Inheritance trilogy) and The Ted Dreams recently came out within months of one another. In short, she’s a marvel — and she speaks so quickly and wonderfully, I hope I got it all down.

Would it matter if I read your books from last to first, rather than first to last? If so, what would the reader notice or learn?

I think that if you began them the other way around, they might seem even more alarming. Times have changed; righteous indignation isn’t the same as it used to be. In earlier days, feminists seemed rather more interested in men-hating. Life for women is more complicated now.

Do you miss the manners, if not the conclusions, that you write about? It seems to me that in books like The New Countess, most of the characters don't have to worry about ordinary things like jobs and survival and therefore get up to other things. Is leisure more easily chronicled than other things?

It’s nice to be writing in the current world, though it’s a great rest to write about the past. I get a sort of bounce-back energy writing from the past. I was brought up in a different era. My mother’s and grandmother’s stories were often about people they’d known, firsthand information, and gossip. “Jean Rhys was always after other people’s husbands.” “When we went to dinner with Conrad, he was very nasty to his children.” That sort of thing.

But it was also a time when you came in from the streets, and the maid had to spend 10 minutes cleaning the dirt from your shoes. I was always terribly interested in domestic details, getting the meals on and off the table. I loved and appreciated this particular era and was fascinated by the difference between now and what then counted as ordinary in the life of a big house.

I read that you said “not controlling characters is irresponsible.” Does art have a responsibility?

I teach writing to students, and they often claim that their characters run off on their own. I just say, “Don’t let them.” Characters are there to serve your purpose. So make your point, whatever it is, by making them say the lines they need to say. But this isn’t a very popular lesson. Students like to feel creative; I like them to stick to the point.

Is writing easier for you now?

Not really, but what writing must do is always to flow easily to the reader. One is trying to solve problems all the time, and if you find it easy, you are probably not trying hard enough. As the novelist, you have to focus your own reality within the chaos of the outside world into something with a beginning, middle, and end. [You must prove to the reader] that you can pull it off. Otherwise, don’t do it. It’s not easy.

How do you decide what to write?

Someone says something, someone does something, you hear something on the radio, something strikes you, and you get a feel for the zeitgeist. For me, at least three things need to coincide: some incident in the real world comes along, it fits in with something I’m  thinking about, and the pattern they make needs exploring. My novels are not necessarily tightly plotted from the very beginning.

Which book was the most fun to write?

Most fun has been the trilogy. I already knew the era was fun, having written for the original "Upstairs, Downstairs" TV series. I started the characters off as stereotypes and then developed them into full-bodied people. In the 70s  I had recourse to teams of BBC researchers. Now one can look [things] up on Google.

Felicity, the grandmother in Rhode Island Blues, says she has earned the right to say whatever she thinks — she's 85. What about you? What rights has age given you?

Prudence is still required, even by the old. Felicity says rather crossly what the truth happens to be sometimes, and that upsets people. When I wrote Rhode Island Blues, I was rather hopeful about the pleasures of being old. I think it is a wishful-thinking book. But one good piece of advice was — women should marry younger men!

“Toast is one of the triumphs of civilization.” Is this true?

Absolutely, with the crusts taken off.

Has your audience surprised you? Your demographics, etc.?

Publishers tell you very little. I do know I have a lot of gay male readers. My sense of humor coincides with those that read my books, which surprisingly seems to be quite a lot of men, more than expected. Men in England are frightened by women’s writing, but this may be less true in some other countries in Europe.

Molly, the nanny in The New Countess, has a realization that older people don't necessarily know more than younger ones. Did you have a moment like this with your sons?

They know more than I do. It’s wonderful, and they can play the piano, paint pictures, make films. I can’t.

How would it be if you were old enough not to be able to tell the difference between what you've written, imagined, and lived, but you could crowd your house with any of your characters? Who would they be?

As long as I’m compos mentis, I don’t want to live with characters from my past books, only with new ones I’m writing. Praxis was a book about a woman who was called everything under the sun; she embodied everything that people had against women at the time. She was a whore, bad cook, a murderer even, who went to prison. It was labeled a feminist book, but I was actually writing about what the world seemed like in the 70s. I tried to keep fun and jokes out of it. "If you write funny lines, you can’t be serious," and I can’t help but write funny lines. But seriousness alone is boring. Praxis is a character I could revisit and put the jokes back in. But I wouldn’t want her moving in with me.

I like to write at the window and look where people are moving and something is going on — movement and people. Though once I had a stint as the writer in residence at the Savoy Hotel — I had a wonderful view and loved it and wrote not a thing because there was nothing to say at the time. I spent most of it watching daytime television.

Generally, I need to fight against interruption in order to be able to achieve anything. I don’t need peace and quiet. Do remember, I grew up in advertising, where you had to get the work done quickly and get it out there, and you learned not to be too fancy and self-indulgent.

Do you feel more like shutting up or saying more?

People still turn up and say, “Oh, your book saved my marriage!” I look at them and think, “Oh, that could be terrible,” and wish I hadn’t written the thing that helped. How can I know what I’ve actually saved? You write out of a kind of thinking that seems true, but I’m not there for the consequences of this saved marriage. Other people are, alas.

What’s the biggest change in the world of publishing?

Of course, it’s the e-book and the [end] of the old ways of publishing. Writers have to embrace [e-publishing] and not feel that this is evil. It’s different; it’s naked text without trimmings. You can’t still imagine your reader sitting quietly with time to think. You’ve got to shout at them now and try and convert them to your story. It’s the same book, just in a shouting style.

Do you write yourself out of your old life or into a new one?

The first sentence of a new book follows on from the last sentence of the last book — now how should we do this in another way? — and goes on for about three novels until the theme is worked out. And then one goes on to another tack; something else to be worked out.