An Interview with Eric Jerome Dickey

The author discusses the writing life, character development, and his latest novel, The Blackbirds. 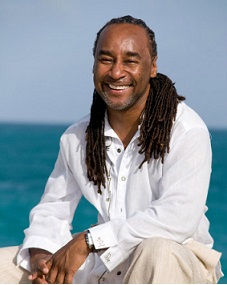 Eric Jerome Dickey’s novel The Blackbirds spins the tale of four women who remain inseparable in spite of their struggles. Friendship is the one thing they share, though even this bond is strained as they each navigate the strange waters of finding true mates and falling in and out of love. The Blackbirds, as they come to be known, make their journeys together, exploring life to the fullest.


What was the seed for this novel and how did you develop it?

It was random. I hadn’t planned on revisiting this set of characters, but I’d always thought about doing a novel featuring characters from different novels, as I did here. I had no idea I would use so many; that was a bit ambitious. Still, that approach felt a little more organic/creative than the standard sequel. (Yet it becomes a sequel to three novels at once, without truly being a sequel. Maybe, in television terms, it’s more of a one-off spin-off.)

This was interesting because three of the four characters (Ericka, Kwanzaa, Destiny) appeared in previous novels, but only one (Destiny Jones, Chasing Destiny) as a main character, while one (Ericka Stockwell, Friends and Lovers) was a small part of a larger story, and a third (Kwanzaa Browne, Liar’s Game) was the focal point of another novel. That’s the magic of writing. If we say it’s so, and write with conviction, then it is so; the genre is not important. Superman flies. Try to tell fanboys he does not exist, and be ready for a brawl.

Blackbirds was my introduction to you as a writer. I found all of the characters, especially free-spirited Indigo, interesting. Are the characters modeled after anyone you know? Do you have favorite characters?

Nope. None are modeled after anyone. All are created from the ground up.

I’ve never had favorites. It has never been personal for me. I’m all in when working, then I sort of disconnect and move on when done. I return to this thing called…reality.

And welcome aboard! Hope you enjoyed the read. The Blackbirds are a bit gregarious and loquacious, but hey, when they are together they don’t know how to turn it off.

Is there a character that still haunts you? Written or unwritten?

Haunts? Well, time to time, I will wonder if there is more story to be exploited, but that’s more in a hypothetical/professional/contractual way than being haunted. It’s simply me continuing the game of “What if?” Characters are not real to me. They are malleable because I get to determine how they will change. It’s fiction, and I recognize it all as being fiction. I don’t want to push the return of any character, but at the same time, if an idea comes to me, I don’t want to miss an opportunity to create something wonderful. More than once, I’ve started writing, revisited a character (Dante from Thieves' Paradise, for example), but it didn't pan out. Or a character who had a lead role ended up having a smaller, secondary part (Driver from Drive Me Crazy) in a different novel.

Since you’re new to the Dickey Universe, it’s standard in almost every novel that someone from a previous novel walks through the pages in some form, and from the first novel to The Blackbirds, there is rarely more than six degrees of separation between any two characters. For example, Dubois Junior was gestating in his mother’s womb at the end of Friends and Lovers, and Hakeem Mitchell was a little mannish boy in Cheaters. Eddie’s dad was in F&L. All the parents mentioned or that appeared in The Blackbirds had been main characters in previous novels. Now they are a little more seasoned, not always sage, and in that stage of life where they feel either their youth is slipping away, or they are starting to recognize their mortality. For some, a particular desperation comes with aging.

The women in The Blackbirds have such a special sisterhood relationship. Where did the idea of writing about this unique relationship come from? How did you develop the ability to write so convincingly about the opposite gender? Please don't say what Jack Nicholson said in “As Good As It Gets”: “I think of a man and take away reason and responsibility.” (Just kidding.)

LOL @ Jack. Okay. I’m trying to not be a one-trick pony and I’ve penned crime and punishment, international assassins, relationships from coast to coast, erotica from a few angles, and various types of sisterhood in many novels since ’96. But focusing on sisterhood, I’ve written about women who could be considered blood sisters, uber BFFs, all with relationships that could be described as having their own unique personalities. Each relationship is a character as well. Since I was a little boy being paid to feed the dinosaurs, I’ve written novels in multiple voices, as well as a mixture of men and women. I’ve also penned novels using first-person and a single male voice, or first-person and a single woman’s voice. The technique varies. Depends on the novel. Depends on how I want it to feel. Each story has its own way of being told.

Moving on, what Jack said also applies to writing about men and war. Take away reason…drop bombs…send in the drones…and, as if we were in a Peter Sellers spoof, let us awaken the Judy Collins in us and sing, “But where are the drones? Send in the drones.” Or do Streisand, if that’s your preference.

You've written 29 books. Is there a manuscript still hidden in a drawer that won't see the light of day?

Nothing is hidden. I wish I had a crop of new novels growing at my feet, or already farmed and preserved. Penning three novels in a span of 18 months, or releasing two in one year, well, that type of schedule doesn’t leave much time to have extra novels sitting around chit-chatting while they play Spades and sip brown liquor. It’s a ridiculous pace, not for everyone, and relative to the pace of a few writers from a couple of generations back, insane.

I will never forget the late, great Bebe Moore Campbell looking at me and asking, “Why a book a year?” I had no answer. I didn’t fully understand the question until years later. A writer has to work, but also needs time to live. Without life, there is no boundless creativity, not the kind that grows, evolves, and becomes stronger. So it goes.

So I tell all who want to enter this arena, be it for a lifetime or for a season, be prepared to work. It’s important to read, but more important to study. Many miss that. Buy coffee. We work while others sleep. Come here if you love this, and for no other reason. Write, finish, repeat.

And is there an interesting story about how you decided to become a writer?

Nah. Nothing too interesting. I was an engineer, worked aerospace, did standup, this, that, and the other, eventually went to UCLA, reinvented myself, started using my middle name to make my name sound smoother and less crass. (The way some people down South would say my name aloud, I kid you not, sounded pornographic. Oh, those memories of Carver High School.) Studied, studied, studied, read, read, read, wrote, wrote, still rewriting what I wrote, wrote, wrote. At UCLA, I started with all the 101 classes, learned what I could from the ground up. My best approach to anything, no matter my level of experience or education, has always been with an empty cup. You never know everything. Best investment ever. All about dedication and determination. Plus focus.

In your acknowledgements, you mention The Blackbirds could be a stand-alone novel, though these are characters who have returned. Are your readers likely to see the Blackbirds again? What helps you differentiate between a series and a stand-alone?

It helps to know your characters inside-out, the character of the character. Not description, but character. People tend to confuse a few lines of description as character. Job isn’t character. Behavior is character. The writer has to understand/realize the momentary needs, wants, and fears of a fictional character. Understanding the character’s motivation helps the writer create a powerful destination and more powerful obstacles. We have to have bumps in the roads, and we have to employ the reversal of expectation. A writer needs to be able to (try to) sidestep sterotypes and create unique complications (conflict) and at the same time give each character his/her own voice and personality. I loved the scenes when they were together. Creating Indigo, her voice, her Nigerian background, that was a challenge. Hopefully, I made Indigo’s character sing. So much ribbing and discovery between the Blackbirds.

See them again? No idea. Back in ’96, I had no idea Ericka would pop up again, or what her story would be two decades later, and in ’99, I had no idea Kwanzaa would ever reappear as an adult. In some ways, Time decides.

A series, like the Gideon series, is written in a way that will not allow it to end. Intentionally. As things are resolved, deeper issues are raised and soon become the primary plot for the next novel. In a stand-alone, the big issues are resolved without the urgency to have to continue the tale. It’s wrapped up, not always neatly, with an ending that fits the tale, be it a perceived up-ending, down-ending, or ambiguous ending. At the top of each novel, a promise is made, and once that promise is fulfilled…let the lady sing as the curtain eases down.

How was it for you as an author to give Destiny the courage to discover her self-worth and take her mask off to gain freedom?

It felt natural. I knew her full journey. She was a private-school kid on a particular trajectory, but was enamored by a certain life and sub-culture that in the end betrayed her. Her world has always been dark/imperfect and because of that, has been more interesting/challenging for me to write about. Many have commented and applauded Destiny for the way she handled herself in Chasing Destiny, and many have applauded her in The Blackbirds. Many have connected with Ericka. Or Kwanzaa. Or Indigo. As a writer, you never know what a reader will relate to, or why. It’s a writer’s job to tell the best, most compelling story they can, and let the rest do what it do. I digress. Back to Destiny Jones. Some comment on the writing; some comment on the situation, because of her abuse, the victim being blamed, the shaming. It hits close to home in one way or another. Many have been silenced by shame. Someone told me via social media that when Destiny spoke up for herself, they put the book down, stood and applauded, then wiped away a few tears.

What's next for Eric Jerome Dickey?

A long nap and a turkey burger. The rest, we will wait and see. Let me stay in the moment. Let me enjoy. We move so fast and never rest. For now, I just want the Blackbirds to fly and reach a height that makes all problems seem small. They deserve the spotlight.

Live. Love. Laugh. And most of all, write.

Niki Shepperd is a Washington area resident with a long-term love of literature.

An Interview with Mona Simpson

In case being Steve Jobs' long-lost sister or the inspiration for a character on “The Simpsons” isn't interesting enough for you, Mona Simpson is also a very good writer.