An Interview with Donald Bain

Recently, I had the opportunity to interview Donald Bain, author of more than three-dozen Murder, She Wrote mysteries, plus many other titles. Here, he offers insight into the writing life and gives readers a look at how he has managed to be so successful over the years. 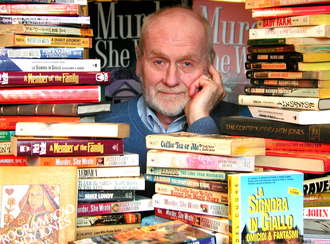 You're primarily known for your mystery novels, but you have written other types of fiction, as well. If you had to choose a genre, which would you prefer writing?

For most of my writing career, the books I’ve written were assigned by publishers, which exposed me to a wide variety of genres in which to ply my trade. I enjoy diversity, and having been able to shift from comedies to thrillers to police procedurals to westerns to historical romance novels has kept me stimulated professionally. If I had to choose a genre, I suppose I would opt for lighter fare, comedies like Coffee, Tea or Me? and its 13 direct and indirect sequels. While those books were billed as “nonfiction,” they were, in fact, the result of my novelistic and comedic approach to the subjects. I try to inject at least a modicum of humor in every book I write. So I suppose my answer is humorous novels.

Where do your ideas come from?

Ideas come from so many disparate sources. My immediate personal world is one. So are the daily newspapers I read each morning. Once a kernel of an idea comes to me, I play the “what-if?” game. My wife, Renée Paley-Bain, with whom I collaborate on the Murder, She Wrote series, and I were reading about Fashion Week in New York City and decided it would provide an interesting backdrop for Jessica Fletcher’s next adventure. Our interest in combating domestic violence spawned another book in that series. And my love of jazz resulted in Jessica traveling to New Orleans, where she trips over yet another dead body. Of course, Washington, DC, and our government is easy pickings for story ideas in the Margaret Truman Capital Crimes series that I’ve been involved with for more than 25 years. My operative philosophy is that when dealing with our nation’s capital and the government, anything that I conjure up, no matter how far-fetched, is possible.

How do you begin a novel?

I begin each novel with the title page. I’m not being snide. If the title is right, the writing of the book has it as its “theme,” and every page of the manuscript must support that theme in one way or another. Of course, I also like to have my research completed before beginning to write, although research is a continuing process depending upon where the story leads me. And I end a novel with “END,” the most blessed word in any writer’s life.

What is your creative process?

I don’t know if I have a creative process, but if I do, it’s changed over the years. I used to be a morning person, having written my day’s allotment of 10 or more pages in time for a late lunch. More recently, I find myself enjoying leisurely mornings, and get down to writing after lunch and into the early evening. I’m obsessive-compulsive about my surroundings; everything must be in place when I start the day’s pages. And unlike my wife, who needs complete silence when writing, I have either jazz recordings or the TV on while I work. And, of course, I end every day with a martini made with gin, not vodka, cold and dry, shaken, served straight up, with a twist.

Do you ever find yourself stuck in the middle of a book and unsure of how the plot will turn out?

What was it like to work with the late Margaret Truman? Is it difficult to ghostwrite in her voice?

Margaret and I were good friends, and I worked closely with her on all her novels in her Capital Crimes series, set in Washington, DC, with the exception of the first one. Margaret was a joy to work with, and I became intimately knowledgeable about her views on Washington and the government. As her father, President Harry Truman, once quipped, “If you want a friend in Washington, get a dog!” Because I knew Margaret for so many years and understood her sensitivities and viewpoints, continuing to write the series following her death was made easier, although I admit that, since her passing, the novels have become somewhat more hard-edged. Although she’s no longer alive, I feel her looking over my shoulder with every page I write.

Every book starts with a sketchy outline, usually no more than five or six pages. As the writing progresses, characters and events often change from what the “outline” dictated; I like having that freedom to give the book some air and to allow it to lead me to places I hadn’t conceived of earlier. I suppose you could call me a “pantser,” someone who writes by the seat of his pants.

What advice would you give to other writers?

One of my favorite sayings is, “All good writing is rewriting.” I know too many aspiring writers who struggle to make the first page, first paragraph, or first chapter “perfect.” That never works. Get that first draft down no matter how rough it might be, and then begin the crucial (and enjoyable, at least for me) rewriting, polishing, rewriting again, and fine-tuning of the manuscript. I also enjoy the saying, “If I had more time, I would have written less.” Be ruthless in deleting every unnecessary word. Final advice: Write! Thinking about what you’re going to write accomplishes nothing. Get it down on paper (or on the screen). Ideas are a dime a dozen unless you act on them.

Throughout the course of the Murder, She Wrote books, readers have seen the friendship between Jessica and Inspector Sutherland deepen. Will they ever marry?

That question has been asked by hundreds of our readers over the 25-plus years of the MSW book series. Because Universal owns the rights to the series, they have final say over every manuscript we write, and they aren’t about to have Jessica break away from the pattern of her life as concocted by the show’s writers and executives. I once had Jessica and George kiss (Coffee, Tea or Murder?), but that scene had to be deleted after the studio vetted the manuscript. So don’t hold your breath that Jessica and George will take their romantic flirtation to a new level. Then again, as they say in TV, “stay tuned.”

What was it like to know P.D. James? Did she influence your writing?

Phyllis (P.D.) James was a dear and treasured friend, with whom [my wife and I] spent many happy days and nights. She was as lovely a person as she was a talented one, and knowing her personally ranks at the top of our “aren’t we lucky?” list. She influenced my writing as she did many writers, but not necessarily in a direct way. What she did was to raise the bar very high for literary murder mysteries, and reaching that high standard is something to strive for every day that I sit down at the computer. By the way, I taught Phyllis how to shoot craps on the QE2. We spent a marvelous six days crossing the Atlantic on that majestic ship with Phyllis and her friend and editor Rosemary Goad, and Phyllis had her one fling at the craps table in the casino after dinner one night. She writes about it in her excellent memoir, Time to Be in Earnest. We miss you, Phyllis.

Which authors inspired you to get into writing?

I was initially inspired by my cousin, Jack Pearl, who wrote more than 100 books, including the Patton biography that was the basis for the movie about General Patton. Since then, there have been so many writers, of myriad persuasions, who have inspired and influenced me. I loved Faulkner and Graham Greene. Donald Westlake always delighted me, as did the humor writers Max Shulman and Jack Douglas. Kurt Vonnegut and Arturo Vivanti were favorites, and I particularly enjoyed the social commentary of Edmund Wilson. The list could go on, of course.

The Murder, She Wrote series is a collaborative effort between you and your wife. Describe how the two of you work together.

We work together well (we’re still married). We have separate offices and a conference room in between where we meet many times a day to discuss the next scene or chapter in the latest Murder, She Wrote novel. We go back and forth between writing and editing each other’s work. If I’m immersed in the last Margaret Truman Washington-based thriller, Renée does the heavy writing on MSW, and I edit. It’s pretty seamless. Once, when Renée was reading my latest Truman novel, she hated a line I’d written. She called it “clunky writing.” I got my back up and declared that the line was a good one and was staying in. The book was published, and the first review, generally a positive one, did point out that there was some “clunky writing” and cited that same line. As I say, we’re still married. If my ego could survive that, there’s nothing can throw me.

Barbara Irvin writes the monthly Prose as Profession column for the Independent.

An Interview with Kenneth P. Anderson

The physician/writer discusses the future of American healthcare.