An Interview with David A. Taylor

The DC-based writer talks history, Cork Wars, and how stories sometimes find him. 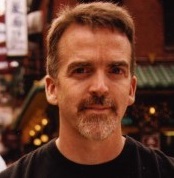 Author David A. Taylor has somehow turned the material plugging our wine bottles and padding our Birkenstocks into an epic saga spanning generations and stretching across continents. In Cork Wars: Intrigue and Industry in World War II, this seemingly humble material plays a leading role in a story that reads as if it were lifted from John le Carré.

Taylor begins the book with a bang, describing a little-known incident from June 1940: the explosion at Baltimore's Crown Cork and Seal Factory. Because cork was used in gaskets, bomber insulation, and ammunition, it was essential to the war effort, and rumors circulated about Nazi involvement in the blast.

As he demonstrated with his previous book, Ginseng, the Divine Root, Taylor has a knack for taking unsung heroes and elevating them to star status. He did this so beautifully in his first book, Soul of a People: The WPA Writers' Project Uncovers Depression America, a humane and seminal accounting of our country not unlike Studs Terkel's Working. In fact, Terkel gives his own star turn in Taylor's companion documentary, "Soul of a People: Writing America's Story."

First ginseng, and now cork. How are you able to tell a story about a thing and make it so compelling? Was it hard to convince a publisher that people would be interested in reading about the stuff they pull out of wine bottles?

Back in my 20s, I read John McPhee’s Oranges and it surprised me so much. I found myself laughing out loud at some of his lines and the way growing oranges in Florida revealed people’s contradictions. McPhee packed so much humanity into that small lens on life. In fiction, I loved Primo Levi’s The Periodic Table for a similar reason: entering his vast and human response to the Holocaust through the chemical elements. I didn’t realize it then, but years later, that kind of story offered me an organic principle for organizing a story — the surprise of a world-in-a-grain-of-sand kind of thing.

So, with ginseng, I went to a workshop in the Virginia mountains to hear how people were learning to grow this medicinal root, and when I got there, it turned out everyone there had a story — about their grandfather’s ginseng hoe, or how their father had taught them to find the plant in the woods, or their brother or sister, or ginseng crimes. This small root uncovered a subculture, and I just had to tug.

I’ve since tried to shake off that method. The approach got a little shopworn in the 2000s (Salt, Tulipomania, etc.), and there are often more imaginative ways into stories. But it seemed right for this cork story and connected these families from Portugal and Spain to Baltimore and New York in this dramatic time of war and migration and fear. We might have a little shell-shock around World War II histories, and this focus allowed a new way in while opening up a whole world.

Still, a book-length narrative on wine stoppers was not an easy sell! I have learned to let go of some stories, but with this one, with its drama, spies, and World War II, I got obsessed. It cost me my first agent. He tried with a bunch of publishers, then let me go. With a second agent and a more robust proposal, I found a soulmate in Elizabeth Demers, who was American history editor at Johns Hopkins University Press. She had Baltimore roots so was drawn to that piece of the story also. She became an important champion for the book.

I remember when you told me you were thinking about writing this book. You stumbled upon the subject in a roundabout way, right?

It’s cliché to say this story found me, but it did. While I was working on my earlier book about the WPA writers in the 1930s and early ‘40s, I stumbled on an article about a tree-planting campaign during World War II. The article said Americans were planting millions of cork oak trees from coast to coast, with the idea they could save the country. And, I thought, “How could tree-planting help win a war?”

The question suggested how a natural item can get entangled in human conflict, like oil. Before, I’d worked with foresters who studied things like people’s relationships with forests, and I’d written articles about what happens when forests get weaponized, so to speak. So the article intrigued me.

There wasn’t much more printed about that WWII episode, so I sought out someone who had firsthand experience. Charles McManus Jr. was 96 years old and lived outside Baltimore, so I called and made an appointment. When we met, he was very sharp. We sat in the empty ballroom of his retirement community in Towson, Maryland, and, in the course of several hours, I found myself totally curious about this bygone world he described.

He said two things that especially captivated me. First, he described an otherworldly scene of cork harvests in Portugal. In his 20s, he had visited Portugal with his father, and the traditional harvest — the skilled workers peeling the thick cork bark from the trees — was magical.

The second scene he described was hellish: A massive 15-alarm fire at the Baltimore factory in September 1940, which burned for days and destroyed nine acres of cork inventory. He was there and felt the heat coming in waves off the fire. Coming just before the war, he said, that fire put Crown Cork and the cork industry on the radar of U.S. government and national security officials. That’s when it struck me there was a bigger story to find.

How do you write about people who are no longer alive to tell their story?

Good question. You can sometimes get their voice in their letters, journals, or other papers they left behind, but if you rely just on those, your narrative can feel dry or stiff. For me, it’s key to find people close to them who are still alive. That way, too, it can become a family story, not a story of a person in isolation.

For each of the families [portrayed in my book], I was lucky to find someone who A) was in their 90s and remembered the story firsthand, B) was in good [enough] health to handle a series of in-depth conversations with me, and C) turned out to be a fantastic storyteller. Gloria Marsa (later Meckel) can paint a picture of Lisbon from her teenage years in color and drama. She’s amazing. She’s 96. And Frank DiCara’s memories remain clear — including dialogue, humor, and piss and vinegar. So I was exceptionally lucky.

What's next for you? Any other one-word natural material to conquer?

I sort of hope not. What may be more likely is something completely different. I’m fascinated by certain secret fraternal and sorority organizations, probably from reading Bowling Alone many years ago. There’s a parallel history involving white Masonic lodges and African-American lodges, and a path toward Brown v. Board [of Education].

I’m in awe of the vision of August Wilson, whose “Century Cycle” is monumental. Ten plays, a decade each. I love the idea of a vast canvas of a century and pursuing it that way! On my own humble scale, I have my ‘30s story with the WPA writers in Soul of a People, and now Cork Wars in the 1940s. So I have a few more decades to go.

Cathy Alter is author, most recently, of CRUSH: Writers Reflect on Love, Longing, and the Power of Their First Celebrity Crush, and a member of the Independent’s board.