An Interview with Darin Bradley

Darin Bradley’s second novel, Chimpanzee, traffics in dystopian themes, but not in the same way as does the plot-driven The Hunger Games or the allegorical/satirical stories of Margaret Atwood. Instead, his world recalls the more subtle work of Philip K. Dick or Chang-Rae Lee. 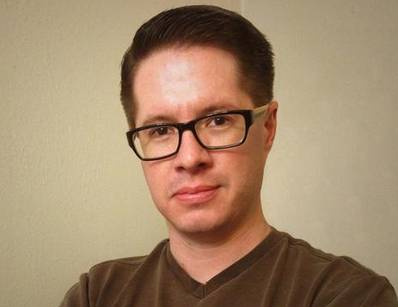 Chimpanzee is a short but densely layered novel. The fragmentary prose mimics the emotional and intellectual turmoil that Cade, the main character, goes through as he loses himself. Memories fracture and fade, indicated by gaps in the text itself. Here, author Darin Bradley discusses dystopian fiction, the current political zeitgeist, and his still-in-progress third novel.

Dystopian/post-apocalyptic fiction is “in” right now, but the world of Chimpanzee is a very different kind of dystopia, more influenced by economic collapse. Can you map out the background events that led to the world you created?

In all honesty, no. In much the same manner as the collapse in my first novel, Noise, I don’t actually know precisely what precipitated the state of the world as it exists in Chimpanzee. My characters do know — everyone in the novel knows — which means they’re not likely to spend much time informing each other (or us) about shared cultural knowledge. The vagaries of economic flux, international political antagonism, and globalization are all so familiar to us today that it doesn’t take much to imagine a world wherein these elements have fallen under their own weight — indeed, we’ve seen it before.

I used to teach a course called “Apocalypse, Annihilation, and Unrest in Contemporary Media,” and in that course, I introduced my students to cataclysmic cultural events that had no explanation — that offered no map by which to recreate the events leading to the collapse. And what they often came to realize was that if there was no explanation to find in the text, then that usually meant it didn’t matter. Thrusting a reader into a dystopian situation without memory of how they got there simply forces their attention onto the characters and how they navigate what things we do know.

What is the relationship to your first novel, Noise?

Chimpanzee is not a direct sequel to Noise, but I do think of it as the second book of a cluster of three (concluding next year with Totem) that iterate on three different perspectives on a shared theme. The books don’t occur within the same world — they’re all thinly adjacent versions of our own familiar world — but they occur in very similar realities.

Did the recent Occupy movement influence the “Chimpanzee” movement in the book?

In short, no, but I was quite taken aback by Occupy. I began writing Chimpanzee before Noise was even released. The Occupy movement sprang up in 2011 — at the time, I was working as an administrative editor for “Studies in the Novel,” and I used to watch the UNT Occupy chapter from my office window, willing them into successful upheaval, out there in those tents, sharing those intellectual spaces. Sadly, like things do, the movement lost momentum, but not before it taught me that there was something to my own Chimpanzee movement.

Government surveillance and privacy are major themes in Chimpanzee. Did WikiLeaks and the Edward Snowden affair influence or inspire any part of the book?

Much like Occupy, Snowden’s WikiLeaks disclosure occurred somewhat late in the creative process. I sold the manuscript in November of 2013, so by June, when Snowden began his famous leak, all that was really left in the editing of Chimpanzee was adding and removing commas. (Usually the same ones, over and over.) But privacy and surveillance are, indeed, very central themes in the book. Even if Snowden had kept his secrets to himself, the degree of informational invasion depicted in Chimpanzee wouldn’t have been a stretch to imagine.

I’d call Chimpanzee a “cognitive-science fiction” novel as much as a dystopian work. What research did you draw upon to create the “Repossession Therapy” and “Indexing Technology”?

As with Noise, many of the main character’s memories and experiences are my own. He tells us that he earned advanced degrees in abstract fiction and cognitive theory — those were my own doctoral concentrations. I spent a great deal of time in graduate school with theoretical linguistics and literary theory, which led me pretty easily to studies of consciousness. I borrowed from the field work I had engaged in in the program when setting the foundations for indexing, chimping, and repossession therapy. Since then, a number of scientific articles have appeared that detail how the erasure and creation of memories is no longer science fiction — that we can achieve as much with laboratory animals. Frankly, I find that both fascinating and disturbing. And had I known what science would achieve in the last five years, I might have approached my own technological ideas in the novel a little differently.

You are a recovering academic. Chimpanzee seems to be “in conversation” with the issue of student loans and STEM education vs. liberal-arts education. How much of your experience is in the book?

Oh, a great deal. As I mentioned, many of my main character’s experiences are my own, including some of the flashbacks. I earned the advanced degrees and spent some time teaching and grew disillusioned with the bill of goods many of us were sold as kids in the Utopian Reaganism of the ‘80s, when we were all taught to work hard and go to school so we’d be guaranteed worthwhile and satisfying work.

We were there for the fetishizing of the body (keep it pure; say no to drugs; D.A.R.E; wait until marriage) and the demonizing of disease, disorder, or aberrance. We grew up confident, annealed by the Cold War, and after we followed all the rules and found ourselves at the other end of that messaging, many of us found ourselves over-degreed or unnecessarily degreed.

The cult of the college degree had begun to lose traction (as it continues to do), and we began to wonder just what, exactly, we’d been chasing through the end of the last millennium. Financially indentured by student debt and (if I can say this with a straight face) existentially delayed, we all learned to postpone those life experiences we thought we were supposed to work for, and we learned to do it in a period of gross income inequality and international upheaval.

In a sense, we woke up from the American Dream, which is what I wanted to demonstrate with Benjamin Cade [in Chimpanzee]. He is literally being cognitively dismantled — for the rest of us, the process is decidedly more figurative.

Can you give us a teaser about Totem?

Sure. Totem, perhaps unsurprisingly, is another dystopia. Whereas Noise looked at destruction, and Chimpanzee examined the aftermath, Totem will ask some questions about social rebirth — and the answers will be tough. Totem follows the lives of a dozen or so characters living and working in the fictional city-state of Aer — a UNESCO World Heritage Site situated somewhere (beats me) overseas.

Aer used to be the capital city of one of the world’s most successful empires. Millennia ago, it developed a religion attached to the stone that it quarried as its greatest resource. Over time, exposure to that stone warped the Aeri from their natural forms into something tortured, something divine — a higher, tougher form of being. It’s radioactive. And as the millennia have gone by, we’ve learned how to prevent the Aeris’ untimely religious deaths, but the outside world has rallied to help install radiation abatement that allows this cradle of civilization to maintain its indigenous faith and way of life.

All of the outside interference has created quite a nanny state, and a system of apartheid has developed between the Registered Aeri (who don’t even work — they receive everything they need from all the international aid) and the Unregistered, who, for whatever reason, have been kicked off the list. Those Unregistered can’t really leave, and the Registered need them around to maintain the status quo. As the outside world tries to uncover the truth behind the Registry Act, tensions develop in Aer, and the entire world watches as it learns to remake itself, independent of all those who have forced it into its dystopian mold.

Craig Laurance Gidney writes contemporary young-adult and genre fiction. His first collection, Sea, Swallow Me and Other Stories, was a finalist for a 2009 Lambda Literary Award. Bereft, a YA novel, was published in 2013. Skin Deep Magic is his third book. Gidney lives and writes in his native Washington, DC.