An Interview with Charles Todd

Meet the mother-and-son team behind the pseudonymous author of the Ian Rutledge mystery series. 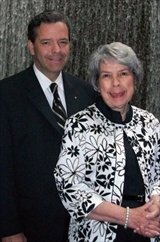 In A Fine Summer’s Day, the 17th Ian Rutledge mystery, by Charles Todd, war is coming to Britain, and young Rutledge must decide whether to join up with the rest of his compatriots or stay and handle his duties at Scotland Yard. It’s a difficult decision made even more so by the seemingly random murders of upstanding citizens happening all across England. He plunges into his quest to find the murderer, meeting uncooperative constables along the way.

Surely you've been asked this question many times before. Who is Charles and who is Todd?

That’s a new one! Since the author is “Charles Todd,” Charles is Charles Todd, and Caroline is also Charles Todd. And who’s on third? Seriously, it was a marketing decision. Try putting Caroline and Charles Todd on the spine of a book — you’d need a magnifying glass to find us. And so we tossed a coin. Both of us do sign “Charles Todd,” too.

Are your writing styles indistinguishable?

We hope they are! We try hard not to distract the reader with guessing games. And the way we collaborate, working together at every stage, it tends to blur the lines as well. The funny thing is, by the time a book is out, we ourselves find it hard to tell who wrote what, because we’ve revised and revisited it so often.

Although it’s 17th in the series, A Fine Summer’s Day is actually a prequel to the other Ian Rutledge novels. Why did you decide to write it now?

The series began in June 1919 with A Test of Wills, as Rutledge returns to Scotland Yard after four years in the trenches of the Great War, and over six months in hospital. The next 15 books follow him over a period of two years (so far) as he struggles with shellshock and tries to come to terms with the changes in both England and himself.

Last year, just after Hunting Shadows came out, we went to England and saw all the preparations going on to mark the 100th anniversary of the start of WWI. And it occurred to us that we had never seen Rutledge in that lovely summer of 1914, when no one had any inkling of what was to come before shellshock and nightmares had changed him forever. We thought we knew this man so well — and yet, what was he really like? That’s when we decided to write A Fine Summer’s Day. And as we did, we found out so much that surprised us and gave us deeper insights into him and into the series.

How would you like reader to approach your work?

First and foremost, as something to look forward to, an exciting, suspenseful mystery novel, whether it’s Bess or Rutledge, or even one of our short stories or standalones. That’s what most mystery fans are looking for, and it’s certainly what we want as well when we read our favorite authors.

If you are new to these mysteries, start with A Fine Summer’s Day to meet Rutledge before the war, then move on to A Test of Wills to meet him after 1918. Followed, of course, by the rest of the books in order. If you are already a fan, think of A Fine Summer’s Day as a chance to discover more about this man you have already grown close to. Next year’s Rutledge, of course, goes back to 1920, his next case after Hunting Shadows. Even if you pick up a book in mid-series, you’ll find it easy to go back to the beginning. Or forward. That’s one thing we care about — making the series accessible at any stage.

You’re the authors of both the Bess Crawford and Rutledge series. Do you have a different method for writing them?

There’s no difference in the method of writing — we start out in England looking for the setting and slowly develop the characters who will live there and the crime that will bring either Rutledge or Bess there. The main difference is that Rutledge works for Scotland Yard, he’s a policeman, and he sees the situation from the point of view of the police, with powers and authority that Bess, as an amateur sleuth, doesn’t have. On the other hand, Bess is often involved with the people who are faced with murder, and so she sees the crime from a very different perspective. She can’t arrest anyone, but she can delve into their personality and secrets. What’s fun is that, every six months or so, we can switch from one to the other, so we’re always looking forward to a new way of seeing murder.

It’s really the HQ for the Metropolitan Police, and it began in a house that expanded to other properties, all of which had an entrance on a street called Great Scotland Yard. And the name stuck. It’s now New Scotland Yard and is about to move again from its more recent location. And it’s like the FBI; as well known in fiction as it ever has been, in fact. But we were told many years ago that there was once a palace there belonging to a Scottish king who was prisoner of an English king, and the street name marked the yard or stables and precincts of that palace. We’ve never had time to track that down, but it’s a much more romantic history, don’t you think?

These days, there are so many book classifications. What is the genre name you prefer? Why?

It’s true, mysteries come in so many classifications — historical, cozy, thriller, police procedural, etc. — all of which make them easier to find on library or bookstore shelves. But a great mystery is a great mystery, whatever the classification, and we’ve read terrific ones in every genre. What do we prefer? We’ve been classified as historical, though a couple of the books have actually been thrillers, and others have been psychological suspense. We like to think that the history is the setting, the suspense is in the telling, and the pace keeps readers on the edges of their seats. Something for everyone. And so “mystery” is just fine.

We never have known for sure “who done it.” Sometimes we have inkling and sometimes that turns out to be wrong. We let the characters tell the story, and we find out the answer just about the time that Bess or Rutledge does. It’s more fun to write not knowing, and a lot more exciting. We never outline — even if we tried, it would bear no resemblance to the final tale. Get the first chapter or scene just right, and somehow from there on to the end, the story tells itself. Sometimes the killer turns out to be someone we care about, we don’t want to be caught. But, of course, we can’t interfere. We have to let the truth play out to the end, the way it would in real life.

J. Shepperd is senior features editor at the Washington Independent Review of Books.

An Interview with Ronald Goldfarb

The attorney/author discusses Snowden, RFK, and his brand-new novel.