An Interview with Carolyn Ferrell 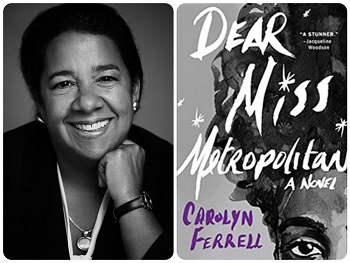 Imagine three young girls in Queens who dream of leaving their dysfunctional homes for someplace better. Fern, Gwin, and Jesenia are all different from each other but find themselves part of the same horrific situation when “Boss Man” kidnaps them and keeps them locked in the basement of a rundown house for years.

This is the premise of Carolyn Ferrell’s debut novel, Dear Miss Metropolitan, which has been praised by the likes of Roxane Gay and Jacqueline Woodson — with good reason. In her story, Ferrell, a professor at Sarah Lawrence, dives deep into the guilt felt by a community — and by the local newspaper’s gossip columnist, Miss Metropolitan — over not realizing the girls were being held hostage right under their noses.

Here, Ferrell talks about the real-life case that inspired the novel and why she wanted to make her characters, even Boss Man, as human as possible.

Where did the idea for Dear Miss Metropolitan come from?

One of the sources definitely was the Ariel Castro case. [Between 2002 and 2004, Cleveland resident Castro abducted Michelle Knight, Amanda Berry, and Gina DeJesus, holding them captive until 2013.] I have to say, that case and others like it of girls in captivity that seemed to be coming [out] around the same time gave me the idea of how we can lose girls, particularly girls of color. How could they disappear for so long and no one was looking for them? The idea that Black and brown girls are considered almost disposable and not important compared to the ideal kidnapped girl, who is usually white and blond, really troubled me. I wanted to give voice to these three girls who had disappeared.

In the novel, we know more about the abducted girls than we do about Miss Metropolitan, even though she’s the title character. Did you purposely leave her in the background?

I think so. I knew I wanted to tell the story of the girls and that it would end with their freedom because that’s what everyone would want to see. I wrote that and I asked myself: Now what? I realized the community was a very important aspect of the story. What did they owe those girls? Once they were liberated, no one really knew what to do with them. When I thought about this story, I knew it had to have multiple voices of community members, and Miss Metropolitan really experiences a sort of survivor’s guilt for not knowing what was happening because she truly has a very strong moral compass. She and her neighborhood friends are sort of like a Greek chorus in the novel, [which kept] them more peripheral.

Even though Boss Man is the villain, we learn things about his past, including his terrible childhood experiences. How did you keep from using his own abuse as an excuse for him abusing the girls?

I feel 100-percent-evil characters are not that interesting and they tend to be more symbolic. I didn’t want to excuse him or let him off the hook, but I wanted for him to have a tiny bit of dimension. If I didn’t give him that, he could be almost a caricature, and that’s not what I wanted. He was a person, like the girls, with a history.

The novel’s ending is ambiguous about the fate of one of the girls. Was that the way you always planned to conclude the story?

I didn’t really know what was going to happen to that character. I toyed a little with the possibility of magical realism towards the end but decided I wanted it to be a bit of a mystery around her. I just felt she had to end this way because of her inability to unpack the things that were right in front of her…We often think, “How do people get closure?” And in this story, they don’t. It’s just something they have to deal with. It just keeps going on and on, and they figure out how to live that way. Closure is such an overused word, when it’s really about learning about yourself and never really leaving the past behind.

Now that Dear Miss Metropolitan is out in the world, what future projects are you working on?

I have a story collection that I’m trying to finish and I’m also working on a new book that won’t be as fragmented as Dear Miss Metropolitan; it’s looking at the Holocaust and the history of redlining on Long Island. At the same time, I’m exploring the subject of human zoos, which were very popular in Germany and Belgium. Even the Bronx Zoo had a human exhibit at one point, so I’m trying to combine all of these things.