An Interview with Brian Switek

The journalist talks dinosaurs, must-see skulls, and his enduring fascination with bones. 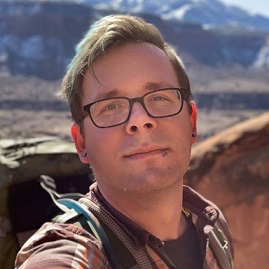 Science journalist Brian Switek studies big, ferocious creatures like the brontosaurus. Since many of the animals he writes about are extinct, he has spent a significant amount of time piecing their lives together through their bones.

In his new book, Skeleton Keys: The Secret Life of Bone, he seeks to understand extinct creatures and explores what bones are, how they began, the connection between bones and the external structure of animals, and whether or not bones should be afforded the same respect as other remains.

Do you have any favorite celebrity skeletons or must-see skulls?

I think my absolute favorites are all animals. AMNH 5027, for example, is the Tyrannosaurus rex that’s stood on the fourth floor of the American Museum of Natural History for over a century and really set the image for what that dinosaur is. But, among humans, I was glad I got to see anthropologist Grover Krantz’s skeleton at the National Museum of Natural History. He wanted to be on display, teaching others about anatomy, and I think the museum’s decision to pose his bones with those of one of his beloved wolfhounds was a touching choice.

In Skeleton Keys, you look at people as a collection of bones and tissue. Is bone structure a deeper form of superficial aesthetics?

I think bones are beautiful. They have their own specialized structure from the microscopic level on up that holds a natural beauty equal to a tree or a desert landscape. That’s because bones have layers, and what those layers can tell you varies with perspective. You can look at bones as a macabre reminder of death, as biological time capsules, as a biomechanical marvel, or something else entirely. How you see a skeleton is entirely up to you.

Do skeletons provide a message on sex or ethnicity?

Our skeletons underscore the wonderful continuum of our species. There are no reliable skeletal markers for race, meaning that everyone fits somewhere on a spectrum of skeletal expression. And while it might be possible to distinguish skeletons as osteologically male or female based on hip-bone anatomy, skeletons alone don’t record our gender. The upshot is that our bones show us to be an incredibly variable and flexible species.

In the evolutionary view, is the diversity of the human form transient? Will a more standard human skeleton emerge?

This is the speculative sci-fi, dystopian view of the future, where humanity becomes a rather plain monolith. But the reverse is likely. Variability tends to reinforce itself, and, in fact, it’s variation that provides the basis for natural selection and other evolutionary forces to alter organisms through time. If anything, human variation is likely to increase with time.

Various cultures have intentionally, and sometimes unintentionally, shaped bones throughout human history. Binding the skulls of children to create an elongated shape is one fashion trend, although consistent corseting in Western societies has altered the skeletons of the wearers, too. In many cases, these changes don’t affect the health of these people, although I will note that the awful practice of foot-binding is an extreme exception. The point is that our bones are incredibly resilient and malleable, subject to fashion trends just like the rest of our bodies.

Why don’t bones and muscles that make up so much of the body get attention in proportion to their size?

What a bone or a skeleton means differs depending on who’s looking at it. As far as bones go, I think they’re easy to take for granted because we don’t really ever see them despite how vital they are to us. So, it’s easy for mythologies of bones, or a more macabre gloss around our skeletons, to take hold simply because we usually don’t think about our bones very much until we have to deal with something like a fracture or bone disease like osteoporosis.

Does the fossil record testify to any truths about our history as humans? Or is it a storehouse of facts that leaves the explaining to scientists?

Humans have a fossil trail that goes back about five million years or so, and it reveals some important details about our history. For example, we’re the only species of human left on the planet when, in the past, there were several human species living side by side at the same time. Paleoanthropologists can also track some of the dramatic changes that affected the human skeleton over time, offering explanations as to how we got to be this way. These are ancient connection points to better understand how we came to be as we are.

Do you think bones will become more collectible in the future? Has the ban on trading in bones by Etsy and eBay had any significant impact?

If anything, I’m hoping that human remains become less collectible. The mindset of many sellers and buyers is reminiscent of 18th- and 19th-century anthropologists who amassed huge bone collections with little thought to ethics or the wishes of the dead. What I would like to see is people put just as much thought into the ethics of the bone trade as they do buying organic at the grocery store.

What secrets revealed by bones has the greatest impact?

I think the greatest secrets of bones are also the simplest. The fact that bone is a tissue that not only unites all of humanity, but innumerable creatures through time. It’s a common feature with expressions as different as a hummingbird and a deep-sea anglerfish. The evolutionary flexibility of bone never ceases to fascinate me.

Many mammals have genital bones. In males, this is the baculum, and in females, it’s called the baubellum. But there’s much we don’t know about how these bones function and why. In fact, in a case of scientific sexism, the baubellum is far less studied than the male counterpart. I’m curious to see what biologists will be able to learn about these unusual skeletal parts in the future.

How much has bone changed from its beginning as a rigid fish plate, and how do you see bone changing in the future?

The biggest changes among bones happened long, long ago, when bone went from a rigid outer covering to a more dynamic, responsive tissue. From there, bone has done everything from been internal support for the vertebrate skeleton to being armor on the bodies of animals as different as alligators and giant ground sloths. I couldn’t say what forms bone will take in the future, but, looking to the past, it’s amazing that so many different forms have evolved, and we’re finding more all the time. I can’t wait to see what turns up next!

Tyler Cymet, DO, is the chief of clinical education for the American Association of Colleges of Osteopathic Medicine. He recently completed a video textbook on manual medicine for Lecturio and is the author of Health Info to Go and Genomic Medicine and the Generalist Physician: Predicting a Flood When It Has Just Started to Rain.