An Interview with Beatriz Williams

The novelist discusses The Wicked City, strong female characters, and the allure of the Jazz Age. 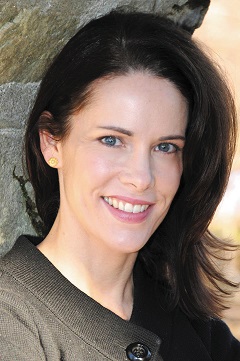 Beatriz Williams is a master storyteller of Jazz Age historical fiction. But to say her most recent novel, The Wicked City, is solely a work of historical fiction would be to miss the other elements she conveys in this gentle ghost story about a forgotten flapper who makes her way into the life of a woman in 1998 New York City.

I asked Williams about the challenges she faces when writing historical fiction, what inspired The Wicked City, and how the 1920s transformed the world.

The Wicked City is actually my second novel set in the Twenties, after last year’s A Certain Age, but once I immersed myself in this restless, transformational era, I knew I’d found fertile ground for the kinds of stories I like to tell — namely, those with clever, energetic women deeply engaged in the changing times around them. It’s easy to forget just how much upheaval took place in the world during the decade after the First World War, in all aspects of human life, from sex to science to communication to transportation to education to literature to manners and everything in between. Having dealt with some of these issues in A Certain Age, I wanted to dig even deeper and create an entire series set around Prohibition — the elephant in everybody’s Jazz Age room — and so The Wicked City was born.

How is the writing process for you? Have you ever struggled with one of your novels?

Every novel has its challenges, although The Wicked City was one of the easier ones for me — partly because I had a fairly clear idea of what I wanted to express in this book, and partly because the main character is so dynamic and has such a distinct voice. I engaged with her immediately, and the rest just flowed.

How much research do you do regarding the way people spoke back in the 1920s, 30s, and 40s, particularly the slang they used?

This is such a great question because voice is key for me in discovering and expressing each character. I do consult resources on slang terms in current use, and in the case of The Wicked City, I also investigated the Appalachian dialect that informs [the character] Ginger’s childhood. I rely mostly on books I’ve read that were written during that period, and particularly on old movies that capture the accent and cadence of speech, which has changed so much over the decades since. I also have something of a musical ear, which helps a great deal! But you can never be completely accurate when expressing a period voice; you aim to capture the essence of the syntax and rhythm and vocabulary.

What is the most difficult part of writing historical fiction?

All the things you don’t know you don’t know. Historical events are pretty easy to research and depict, but the details of everyday life — in other words, the details that make your historical world convincing — are laden with the unconscious assumptions of our modern selves. For example, I was surprised to learn that streets in New York City didn’t start the one-way system until the 1960s, and I stumbled on that fact by accident while researching something else. And it was obvious once I thought about it, but one-way streets are such a fact of traffic in Manhattan, you don’t stop to think. Hats, gloves, cigarettes, and horse manure — all those things inhabited the past in spades. So you have to really immerse yourself in that world, to open your senses, to challenge all your assumptions, and you should rely as much as possible on primary sources, such as diaries, letters, and newspapers.

Your characters from previous novels frequently make guest appearances in later books, including the Schuyler family and now Theresa Marshall, who was a main character in A Certain Age. Are all your novels linked to one another?

Indeed! My novels are all written in the same universe — even the historical romance and now mystery I write as Juliana Gray — so while you can certainly read any of my books on its own, or out of order, my longtime readers really enjoy the connections between the characters. Aunt Julie first appeared way back in A Hundred Summers, and she’s been such a favorite of my readers that she appears in The Wicked City as both a young flapper in the 1920s and a grande-dame in a Hamptons retirement home in the 1990s. And so many readers wanted to know what happened to Pepper’s baby after the end of Along the Infinite Sea, I made her the main character — all grown up — in The Wicked City’s 1998 narrative.

Ginger Kelly, the protagonist of The Wicked City, is such a complex character with a unique background. How difficult (or easy) was it to get inside her head?

As you might imagine, Ginger flew straight from my brain from my fingers to my laptop screen, full of moxie, but like most survivors of childhood trauma, she has so many compartments hidden inside her, most of them locked tight. So while she spoke easily to me, I had to spend some time exploring to figure out what was really making her tick, what she really wanted, and that ended up surprising me. Ella, on the other hand, has a shell around her, and like most introverts, was reluctant to let anyone into her inner world. By the end of the book, I finally felt I was beginning to understand her, and when I sat down to write the sequel (The Wicked Redhead) last summer, I really looked forward to Ella’s chapters.

Frequently, two stories take place simultaneously in your novels. In this case, Ginger and Ella’s stories merge into an interesting amalgam of past and present. How challenging was it to write from such different points of view?

There’s no trouble at all, because I don’t actually switch back and forth while writing a dual-narrative book. I always write the primary story first — usually the one in the past, the one with the drama that impacts the other — and then weave the second narrative around it. In the case of The Wicked City, I wrote Ginger’s tale before starting on Ella’s, which allowed me to time and pace all the events and “reveals” for maximum storytelling impact. And by knowing Ginger so thoroughly, I could draw Ella in relief against her. Readers may notice that they share a kind of inversion — Ginger, whose childhood was so traumatic, is outwardly unconventional but craves stability, even if she isn’t going to admit that out loud, and especially to herself. Ella, who experienced a loving and stable childhood, is outwardly conventional but really wants to break free of the neat, square borders of the life she’s built for herself.

Your next novel, Cocoa Beach, comes out in July. Can you give a hint about its plot?

While not a sequel to my earlier novel A Certain Age, Cocoa Beach picks up a thread left dangling at the end of that book: Virginia, the sister of one of the main characters, has just received a telegram from Florida and catches the next train south with her young daughter. As we discover in Cocoa Beach, Virginia — also a survivor of childhood trauma — experienced a passionate love affair with a British doctor while driving ambulances in the First World War, leading to marriage and then betrayal. Now he’s disappeared in a mysterious fire at his house in Cocoa Beach, and she travels down to Florida to discover what became of him. The novel alternates between wartime France and Jazz Age Florida, and it’s got so many twists and surprises, so many tangled emotions. Virginia might be one of the most complex, courageous women I’ve ever created.

What advice would you give new writers trying to put their stories out there?

First and foremost, you have to read as widely and deeply as possible. You have to work on your craft relentlessly, as I continue to do with each one of my novels. You have to develop an ability to slip inside the skin of another person, even someone (gasp!) who may not be remotely like you, and give that character voice. My own breakthrough came when I had this “aha” moment about storytelling — finding the right story, finding the “juice” in the story that makes it compelling on a human level (I was an anthropology major in college, so that helps), and then telling it in such a way that the reader can’t leave the page. Keep your skin thick and your persistence fed. Be alive to all the inspiration around you.

An Interview with Beatriz Williams

The novelist discusses The Wicked City, strong female characters, and the allure of the Jazz Age.