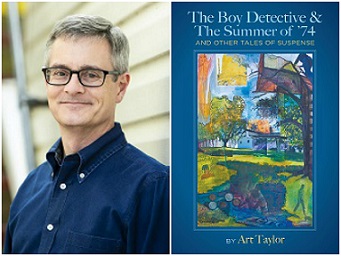 Art Taylor, the author of On the Road with Del & Louise: A Novel in Stories, is back with a new short-story collection, The Boy Detective & The Summer of ’74. This latest release is a compilation of 25 years’ worth of previous work. Here, Taylor talks about what it was like to revisit a quarter-century of his fiction.

Although it’s akin to asking which child you love most — so you were smart to have only one kid! — do you have a favorite story in The Boy Detective & The Summer of ’74?

The title story is my most recent one, first published in the January/February 2020 issue of Alfred Hitchcock’s Mystery Magazine, but it’s also one that I had kept revisiting and revising again and again over many (many) years. In fact, I wrote the first draft of it back in the early ’90s, so it was a long labor for this baby (to stick with the metaphor at hand)! A special kind of thrill to see it finally out in the world.

But that said, when I was rereading all the stories at the proof stage for the new collection, I finished “The Care and Feeding of Houseplants” and turned to my wife, Tara, and said, “You know, that’s a really good story,” enjoying it with some distance now, as a reader myself. It was an odd feeling, an odd reaction maybe — like patting yourself on the back, I know, but it didn’t feel egotistical in the moment.

Lots of writers cringe when reading their past work, but you’ve gone back 25 years and included your first story for Ellery Queen in this collection. How was it revisiting previous stories?

Despite my reaction re-reading “The Care and Feeding of Houseplants,” I’ll admit that some of the other stories felt like they needed a little…attention. Not in major ways, I should stress; I’m proud of the stories generally or I wouldn’t have included them at all. But in some of the earliest stories here, I found that I was committing some of the errors I now warn my own writing students about: the ways that dialogue should be formatted, the way dialogue tags should be used or omitted, the use of adverbs, that kind of thing.

Definitely some cringes there, only because I pictured myself in front of the classroom lecturing students on those very mistakes — and then pictured one of them reading these stories and thinking, “Hypocrite!” The good news: I did revise those stories at those line-levels — dodging the wrath of my students down the line.

Has seeing such a wide expanse of your work in one place revealed anything about how your writing has evolved over time?

It’s actually been insightful to recognize how I keep coming back repeatedly to similar themes and conflicts — particularly issues of relationships and betrayals and the consequences of those betrayals. That’s not solely about romantic relationships, I should stress. The story “The Odds Are Against Us,” for example, is about a friendship that’s stretched from childhood into a more complicated present — and an awful decision one friend has to make about the other.

In other stories, it’s about family, the bonds of family, and the pressures, too. I learned something about myself as a writer by seeing how obsessively I return to these same themes, how stories resonate with one another, even as — in another direction — I’ve found myself trying out new styles or attempting more ambitious structures: several points of view in a single story, for example, or shifts in time, or whatever. Hopefully I’ve grown as a writer in those ways over all this time!

Readers love whodunits. What do you think they most enjoy: solving the mystery before it’s revealed or being happily shocked by an unexpected finish?

I’ll admit: When I’m reading classic detective fiction, I can almost never figure out whodunit. I know that’s part of the game — match wits with the detective — but I’m just happy to go along with the story and see where it takes me, hopefully with a sense of satisfaction at the end! While I write crime fiction, only a couple of the stories in my collection are actually clue-driven in that traditional way. I hope that those specific stories provide some surprises when the truth is revealed — if not surprises about whodunit, then maybe about motives or backstory or other information, the ending offering new perspectives on everything that came before.

You teach college-level creative writing. Which authors do you find yourself nudging students toward again and again?

Such a good question! And a tough one, surprisingly…I actually tried to think which authors I include on my syllabi most often, rather than which I might recommend more casually to my students, but even that’s difficult because I might sometimes use a craft guide (I love Madison Smartt Bell’s Narrative Design) and other times assign the latest Best American anthology (short stories, mystery stories, essays), so authors shift semester to semester. Tried and true over time on my syllabi or in discussion? Patricia Highsmith, Joyce Carol Oates, and Flannery O’Connor, which may say something about my own tastes, of course.

Is labeling mystery/suspense “genre fiction” an insult? In a perfect world, would good writing simply be good writing?

I use that term “genre fiction” myself — differently, I recognize, than some others might use it. Whether we’re talking about crime fiction, science fiction, fantasy, romance — or some subgenre there, like detective stories or domestic suspense or spy novels — each genre has its own tradition, and I think writers working within those genres would do well to study those traditions, to learn both how to write within certain rules and expectations and also how to work thoughtfully against those traditions, building on what’s come before, potentially taking it in new directions. That’s a good thing.

But while I think that each genre has traditions worth exploring and understanding, I also think that the dividing line between "genre fiction” and “literary fiction” is increasingly breaking down. Yes, good writing is good writing, and you can find fine prose stylists working solely within the world of mystery: Megan Abbott, Tana French, Laura Lippman, Louise Penny, just to name a few well-known names.

But on the other side, we see some of our finest “literary" novelists immersing themselves in genre fiction. When I talk about this, I always bring up Cormac McCarthy, whose books could be classified as westerns or crime fiction or post-apocalyptic horror, or maybe Colson Whitehead, who’s written a zombie novel and a masterpiece of speculative fiction and…and, yet, we just don’t label them that way.

In general, some of today’s best novels and stories have moved past those terms. Readers who limit themselves based on snobbery — in either direction — they’re just missing out.

A Q&A with the author of The Transformation of Bartholomew Fortuno.

An Interview with Deborah Eisenberg

The author will be honored by PEN/Faulkner in Washington, DC, this Friday, Dec. 4th.