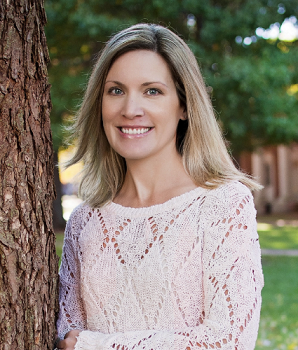 Megan Miranda’s new novel, All the Missing Girls, is a mystery told in reverse. Following Nicolette Farrell as she attempts to resolve the decade-old disappearance of her best friend in the light of a new girl’s disappearance, All the Missing Girls takes on two thrilling cases for the price of one. This is Miranda’s first novel for adults; she has previously written five YA books.

Tim Johnston, New York Times bestselling author of Descent, says, "As original as it is addictive, this story puts a knot in your gut from the opening pages. Then, through the wizardry of its unconventional structure, that knot tightens and tightens and will not let go until the final pages — and even then the story continues to haunt you. Vividly rendered, psychologically complex, and narratively acrobatic, All the Missing Girls is, above all, totally gripping."

All the Missing Girls is your first novel for adults after five YA books. What inspired you to make the leap to an older age group, and how has writing for an older audience been a different experience for you?

I had been writing about these big events that happen to people as teens, and got to thinking about what happens to these characters years down the line. How do these events influence the adults they eventually become? Does it ultimately shape who they become, or do they try to leave it behind and become different people? Do the younger versions of themselves still live inside somewhere? The writing experience for me mostly differs through the perspective — with the adult perspective, there’s the events that have happened, and the filter of experience, and with YA, it’s more about that immediacy of making sense of things for the first time.

Your writing tends to revolve around a crime, like a kidnapping or murder. What drew you to crime as a plot device, and what has kept you coming back?

I think this partly goes back to the books I read as a kid, which were taken from my mom’s bookshelf. She was a huge thriller reader, and I loved trying to solve the puzzles of a mystery. Writing a mystery brings that same feeling, creating a puzzle, sliding the pieces around. For me, the crime element in books or shows and movies has the potential to heighten everything, every character, every action, exposing the hidden parts of people we never see, the thoughts we never know about — it makes you wonder about the people around you. There’s an impact on all the characters, on a community, on their relationships with one another. It’s an extreme, but it’s also exposing.

All the Missing Girls is told in reverse, slowly revealing the big picture. With this kind of book, do you plan out every detail in advance (“write forward,” so to speak, and then reverse it) or develop and change as you go?

I wish I could plan things out in more detail in advance! But the truth is I have to write my way into my drafts, which means a lot of editing as I go. I wrote All the Missing Girls in the order it’s read. To prepare, I had the backstory plotted out in my mind, and used those reveals as markers for the present. But, for me, it was sort of a “write and write again until it all clicks together” method.

Some reviews have drawn a comparison between All the Missing Girls and recent hits Gone Girl and The Girl on the Train. How do you feel about the attempts to lump books with similar themes into a recognizable and therefore marketable trend (for example, girl + crime)? Do you think this has the potential to expand the market for female authors and female-driven stories, or does it undermine or pigeonhole them?

I think the designation helps clue the reader into what type of book/experience it might be. Though Gone Girl and The Girl on the Train are quite different, I think they both focus primarily on the character dynamics. And there’s also something inherent in the structure or set-up that allows for an unreliable component in a natural way. I think the classification goes beyond “girl + crime” in those books to a type of reading experience that has reached a market outside the thriller genre, and so in that way I think it could help to potentially expand the market.

You originally studied biology at MIT. Some might be surprised that such a scientific-minded person would end up in a career driven by artistic creativity. How do you reconcile these two sides?

Honestly, I think the two sides go hand in hand. There’s a time in both writing and science when the creative side is needed, and then there’s a time to step back analytically and assess what you have. I definitely had to do that a lot during the drafting process of All the Missing Girls.

What are your three favorite books currently on your shelf?

My answer to this is constantly changing! A few of my recent favorites are Descent by Tim Johnston, Big Little Lies by Liane Moriarty, and Bird Box by Josh Malerman.

What is the one thing you must have on your desk when you’re writing?

Post-It notes. My desk is covered in multi-colored packs of these. I use them to make notes to myself while writing, or to jot down random ideas, and I tend to move them around on the wall in front of me while I’m drafting.

Ashleigh Andrews Rich interviewed Benjamin Lorr, author of Hell-Bent: Obsession, Pain, and the Search for Something Like Transcendence in Competitive Yoga, which explores the fascinating, often surreal world at the extremes of American yoga.