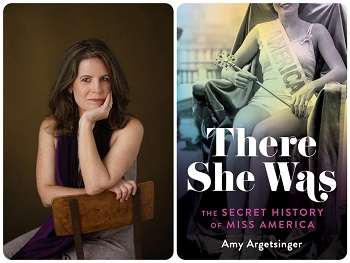 When I was growing up, my parents threw an annual Miss America party. It was the hottest ticket in town. Guests arrived in evening gowns and tuxedos, tossed $20 into the pot, and, after choosing their “girl,” rooted for her like she was playing in the Super Bowl.

Amy Argetsinger shares a similar fondness for what could be considered the country’s first reality show in her new book, There She Was: The Secret History of Miss America. In it, she looks at the pageant’s past and present, literally taking the reader backstage to meet the contestants vying for Miss Virginia (as suspenseful as any Agatha Christie plot), dissecting all the juiciest scandals, and examining the institution against the backdrop of the women’s liberation movement.

An editor for the Washington Post's Style section, Argetsinger authored the Post’s Reliable Source column for years, and it is her knack for detailing delicious drama that makes her book so much fun to read. And now, here she is: Amy Argetsinger…

My memories around Miss America are so positive. What was your first brush with Miss America, and was that experience the genesis for this book?

The broadcast used to start ridiculously late, so I never got to watch until I was 12. But the Washington Post always published a wry, deeply reported take that cemented Miss America in my head from a young age as a major cultural happening. After college, I moved to Iowa, where pageant queens were much more conspicuous than in DC, and I realized for the first time that these glamazons oozing gravitas and maturity on TV were just kids my age. A couple years later, one of my old Iowa newsroom friends and I decided to drive up to Atlantic City and see it for ourselves. She had competed in local pageants against the woman who was now Miss Iowa. We discovered this fascinating subculture, and soon all my DC friends were clamoring to make the return trip with me. It became a semi-annual girls’ weekend trip, where we would try to see who could predict the winner and basically crack the Miss America code.

Reading your book made me think about “Smile,” a movie about a small-town beauty pageant. It came out in 1975, so when you traced the early days of the pageant, I really appreciated all your references — from the movie “Semi Tough” to “Wide World of Sports” to Bert Parks. Have you seen “Smile,” and did you have fun taking these trips down memory lane?

Believe it or not, I still haven’t seen “Smile,” but it’s on my list. (I only just recently saw Sandra Bullock’s “Miss Congeniality” for the first time and loved it. It is an absolute touchstone in pageant circles.) But yes, I could just get lost some days in 1970s culture. This book gave me a legitimate excuse to binge old episodes of “Barnaby Jones” or “Donny & Marie.”

What was the most interesting thing you discovered while reporting the book?

I remembered reading the annual news stories about George Miller, this statistics professor who used his computer-science skills in the 1980s to try to predict the winner. Journalists loved this guy even though he usually got it wrong. When I revisited his story, I realized it was a perfect metaphor for the tension at the heart of Miss America — a world perpetually trying to quantify and recalibrate this elusive “ideal” it holds itself up to.

One of the great conflicts in the book involves Miss America Organization chair Gretchen Carlson and her decision to ban the swimsuit competition. Not only did ratings take a dive, the move divided pageant queens. Both sides make compelling arguments — that parading women around in bikinis is objectifying, or (in the more millennial argument) that putting on a swimsuit is representative of this new era in body positivity. Where are you on the continuum?

I’m still torn. I’m a journalist with no stake in the debate over what the Miss America ideal “should” stand for. But I grapple with the question of whether this was a good business strategy. Philosophically, Carlson’s move made sense — if nothing else, as a Hail Mary rebrand to rejuvenate the pageant’s image and visibility. Yet, by 2018, the pageant’s base had shrunk to a subculture that was generally comfortable with swimsuits and felt alienated by this rejection of their tradition and how it was handled. And there’s been no upside thus far — no influx of new viewers, competitors, or sponsors. The show lost some spark of energy when it got rid of swimsuits. But the optics had clearly become unsustainable.

How much old Miss America footage did you watch to write the book?

A good source hooked me up with some bootlegged videotapes and DVDs, but a lot of the old pageants have now turned up on YouTube. I watched…a LOT.

I feel the need to end with a “pageant” question, so pretend you’re representing the District of Columbia and tell me: As the mother of a young daughter, how would you feel about her entering a pageant?

Ha! I used to ask former Miss Americas the same thing but got such befuddled responses. Now I understand why: Who are we to tell our daughters what to do? I don’t think the pursuit of fame is healthy, but a lot of women manage to treat pageantry as a mere hobby, and by and large, the people on the pageant circuit are pretty darn nice. Having said that, after a lively century, I think the era of beauty pageants is drawing to a close. It’s hard for me to imagine that the pageant circuit will still be around when my daughter hits that age.

An Interview with Carolyn Ferrell