A Portrait of the Artist as a New Man

Learning to express myself in another medium. 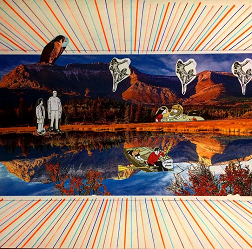 About two years ago, a very interesting thing happened to me, dear friends. But first, let’s go back 40 years…

In the summer of my 15th year, two things happened to set the course of my life. One, I was well into the Tolkien books. I’d read The Hobbit as a 10-year-old. And over the next years, I’d gone onto The Lord of the Rings series. I was a horrible reader, but these books drew me to them and the fantastic stories they told.

The second fateful event of that summer was that our television needed repair and so we had no TV for two full weeks. Now, you can imagine a 14-year-old, raised on Disney and sports, would be at a loss when such a powerful tool of entertainment was taken away. Boredom threatened!

And so, I turned my attention to creating characters and a fantasy world of my own. That was it. By the end of that summer, I knew I would — and could — write. I did that for the next 40 years: lyrics for songs I would sing, journals, poetry, short stories, novels, plays, screenplays, criticism, reviews.

I suppose the main cause was the need to document my life for myself, to detail my days and my emotions, to keep a record, and to leave something of myself behind when I died.

Yet multiple other results occurred: I learned to use language much better and to tell stories. I learned techniques of organization and presentation. I learned what impresses me and how to examine those impressionable mental processes. There is really no end to what writing can lead one to know about themselves.

But about two years ago, I ran aground. For the first time in four decades, I ceased having motivation to write. My poetic voice stopped first. I couldn’t avoid a self-consciousness in my writing which was especially obstructive to poetic expression.

Next came the failure of my fictive voice. I say “failure,” and that’s a strong word, but I couldn’t convince myself that I was capable of revealing characters and telling stories as I previously had, with a kind of naivete (a suspended disbelief) that allowed me to get through the process before I judged the writing.

I took a step back and decided that I wasn’t going to force something that I’d never forced before. And it was a destabilizing moment. My identity was very much wrapped up in the production of language. My children were leaving the house. An empty nest guaranteed I would have more time. A mid-life crisis beckoned.

The one form of writing I have kept up since then is this column. One reason is that reading most certainly provokes me to think. And if I’m thinking about ideas, I can still write about them. I’ve always been ahead of my “Finglish” deadlines, too, usually with three or four columns ready to choose from when it’s time for the next publication.

The other, and far more important, things I’ve done were diversify my artistic techniques. First, I decided that I would illustrate one of my books of poetry, and so delved first into mandalas. This didn’t last long because I soon discovered collage.

This immediately took the place of writing poetry. The similarities are profound: taking small images and juxtaposing them with other small images. My many years of formulating mental images from words helped me to see that a collage is really just a poem, and that shapes and colors and images isolated from their original source could convey the same feelings and ideas as words.

I focused on this project for 18 months and have now incorporated it into my life in the same way that I wrote in my journal for all those years. Same efforts, same rewards, just less navel-gazing.

The other artistic technique I’ve been working on since coronavirus lockdown is converting my poetry into lyrics, putting them to music, and playing and recording a song cycle. So far, I’ve done 30+ songs, some of which I think are pretty good! The collage technique is an exact analogy for song-production, too.

One has ideas. One takes in hand those instruments which may manifest those ideas, and in the performance of the idea, something alchemical occurs. Unity comes from sustained, purposeful expression. An inner coherence arises in the same way that themes and symbols arise in a written text.

All this to say, dear friends, that I’ve discovered that I’m not just a writer — I am an artist.

I’ll always have recourse to writing, if needed. But it’s no longer my main occupation. It’s not even in the top three! And I feel liberated, like I’m young again, only with some years of hard-earned expressive wisdom to help me start again.

So, this is likely my last column. But keep an eye open for Y.S. Fing and our band, the Microcosmic Examples, around DC once we’re all vaccinated and herd-immunized and the lockdown has been lifted. I may have changed my métier, but I haven’t lost my drive!

Finally, I have to thank the good people of the Independent: David Stewart, Salley Shannon, Eugene Meyer, Holly Smith, and too many others to name. I’ve been proud to be a part of this institution.

And thank you, dear reader. It’s been my pleasure.

Y.S. Fing is moving on down the line.