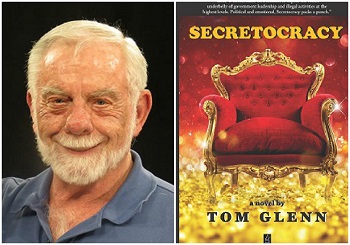 Tom Glenn’s professional life is the stuff of Indiana Jones in the murky world of international intelligence, near-death adventures, secrets kept and squandered, and, of course, betrayal. Years undercover in Vietnam during the war, followed by high-level spydom, with its sometimes tawdry reality, left him emotionally exhausted. He turned to writing, using his experiences as a way to process it all. Tom is an excellent writer and storyteller. He leaves it all on the page. His latest book is called Secretocracy.

So much of your fiction is based on events that really happened. Is that true of Secretocracy?

Yes. Critics have accurately accused me of writing novels that are fiction in name only. All my books and short stories are based on facts. I invent fictional characters to attribute the actions to and sometimes change the time and locale. Last of the Annamese, for example, is based on events that actually happened to me during the Fall of Saigon, but I created a protagonist whom I describe as living through those happenings.

The story of persecution of Gene Westmoreland, the protagonist of Secretocracy, is my story. The National Security Agency (NSA), my employer, assigned me for a multiyear tour to the intelligence budget staff subordinate to the director of CIA. The administration then in power was pushing a highly classified program which violated U.S. law and contravened treaties. I refused to fund the operation.

The administration lowered the boom on me, stripped me of my security clearances, and assigned me to warehouse with no work to do. The purpose of persecuting me was to get me to resign from my government job — if it fired me without cause, I might sue. I hung on until a new administration came into power and exonerated me.

The program I refused to fund was so highly classified that I’m reluctant to name the administration or the time in which all this happened. For all I know, that program may still exist.

Why did you set Secretocracy during the administration of Donald Trump?

Because so much of the story matches what the Trump administration is actually doing — firing of government watchdogs and intelligence professionals, stripping officials of security clearances, removing people from their jobs — because experts are reporting facts that invalidate Trump’s lies. I had written the book before Trump took office, but when I watched what he was doing, I saw that I had already described his administration.

My sense is that the publication of Secretocracy is important right now because it highlights Trump’s attack on the intelligence community, our eyes and ears to warn us if other nations make hostile moves. Because everything about our intelligence agencies is classified, the public has no way of knowing what kind of damage Trump is inflicting. We may be in real danger.

How much of your fiction is based on your life in the intelligence world?

Almost all of it. Most of my books and stories are about Vietnam, where I worked clandestinely for the better part of 13 years. My only book not drawn from my years in intelligence is No-Accounts. That book resulted from my struggle with Post-Traumatic Stress Injury (PTSI), a consequence of experiences in combat in Vietnam. I found that when I was helping others in need, my grisly memories faded. So I volunteered to work with AIDS patients at the height of the epidemic. I was so moved by the experience that I wrote a novel about a straight man caring for a gay man dying of AIDS.

With the publication of Secretocracy, you now have five books in print. What’s next?

Adelaide Books of New York, the publisher of Secretocracy, will bring out my new short-story collection, called Coming to Terms, in July 2020. I hope by then that the pandemic lockdown will be coming to an end and I’ll be able to promote both new books.

I’m drafting two new novels. One is about the 1967 battle of Dak To in Vietnam’s western highlands. It was one of the bloodiest battles during the war, and I was in the midst of it, providing signals intelligence to U.S. forces. The other, tentatively titled Josh at the Door, is the story of a passionate affair between two 80-plus-year-olds.

Discussion with the author of Ten Thousand Saints