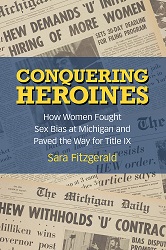 “What made you write your book?”

That’s a question readers often ask authors. For each of my books, I can point to a news event, a question that sparked my curiosity, or even a childhood memory that led me to the story.

But in the case of my latest book, the answer is more complicated. I wanted to revisit an episode I had lived through — 50 years ago. I knew there was more that I could learn now that key documents were accessible in archives. And it was possible that some of the protagonists would be willing to speak more candidly now that they were older and their jobs weren’t on the line.

But returning to that time also helped me understand something about myself and why I had been attracted to the subjects of my books in the first place.

My new book is Conquering Heroines: How Women Fought Sex Bias at Michigan and Paved the Way for Title IX, published by the University of Michigan Press. It’s a complicated story, and to capture it — in true publishing-industry tradition — we came up with a title and subtitle that echoed a phrase of U-M’s fight song, “The Victors.”

In 1970, sex discrimination was rampant on American college campuses, but women faculty members were excluded from the protections of the major 1960s civil rights laws. A woman named Bernice Sandler was frustrated that, after earning a doctorate in psychology from the University of Maryland, her department would not hire her to fill one of several faculty openings.

She found it hard to believe that she did not have a legal recourse, but eventually she found one. In 1967, President Lyndon Johnson had issued an executive order prohibiting federal contractors from discriminating on the basis of sex. Sandler realized that every major U.S. college was a federal contractor and began helping women file complaints against dozens of universities, starting with her own alma mater.

In the case of Michigan, a group of local activists filed the complaint. Through their aggressive lobbying of members of Congress and their engagement with sympathetic, mostly female, reporters, their complaint became the one that the U.S. Department of Health, Education and Welfare (HEW) pursued most aggressively. HEW actually held up several federal contracts before top U-M administrators reluctantly agreed to comply with its demands.

At 19, I was a very junior staff member for the campus newspaper when HEW first issued its findings that the university had, in fact, discriminated against women. I continued to follow the story as I moved up through the ranks of the paper, finally becoming editor-in-chief in the fall of my senior year.

My college years, from 1969 to 1973, turned out to be an exciting time to be a young woman. Ms. Magazine was launched, the National Women’s Political Caucus was founded, the U.S. Supreme Court issued its Roe v. Wade decision, and, at Michigan, the university was forced to adopt goals and timetables for hiring women, and a new Women’s Studies Department was launched.

Two of my professors, alone or nearly alone as females in their departments, began offering seminars on women’s history and women in journalism. I changed my major from journalism to history and began writing term papers on topics that had rarely been explored: the intellectual life of Margaret Fuller; the extent to which Edith Galt Wilson had run the White House following her husband’s stroke; and, for my senior thesis, the flapper phenomenon. I was inspired not only by my professors, but also by Jean King, the 40-something U-M Law School grad who relentlessly pursued the complaint.

My research confirmed what we had suspected back then: that mostly male university presidents had organized to lobby top HEW officials, including then-Secretary Elliot L. Richardson, to relax their enforcement efforts. Out of the U-M archives came the letters between those college presidents, and out of the Library of Congress came Richardson’s appointment books and transcripts of his telephone calls.

Out of departmental personnel files came the stories of women who had tried to fight back and then left Michigan, in frustration, to become academic superstars elsewhere. Some of the protagonists could still be interviewed in their 80s and 90s, even as they acknowledged their memories were growing dimmer.

I came to realize that the story had shaped me, as well. And I discovered that I remembered the story better than many of my campus peers, both men and women.

Over the ensuing years, the University of Michigan emerged as a leader in promoting campus diversity, supporting affirmative action in admissions all the way to the Supreme Court. But it wasn’t always so. And for the sake of the women who had inspired me, I wrote Conquering Heroines to make sure that the world would remember them, too.

Sara Fitzgerald is a former Washington Post editor and the author of The Poet’s Girl: A Novel of Emily Hale and T.S. Eliot (Thought Catalog Books, 2020).

With these savings, I can’t afford not to…