Twenty Years In, Red Hen Press Rises Above the Flock

An L.A. publisher that, like the Independent, embraces its nonprofit status. 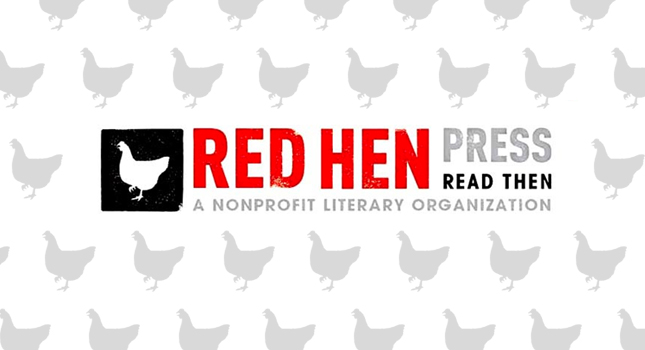 The field of publishing can sometimes seem like a barnyard, with five big roosters stalking around, dominating the plot and duking it out at intervals, while their smaller sisters scramble to catch the crumbs left behind. But as the number of roosters has decreased over the past few years, the number of chickens has increased — and more than just picking up crumbs, a few are making bread of their own.

Pasadena-based Red Hen Press is one of these scrappy upstarts. Since its creation two decades ago, the press’ dual focus on building a literary niche and forging community ties has allowed it to not only survive but thrive in an environment not always hospitable to the little guys. On the eve of its 20th anniversary, Red Hen offers a clear portrait of where independent publishing stands — and where it’s headed — in the 21st century.

Red Hen was born in 1994 as a collective drawn from the writing group of the co-founder and current managing editor, Kate Gale.

“In the beginning, the idea was that we were going to publish everyone as a group,” says Gale.

She and Mark Cull — Red Hen’s publisher and the man who six years later would become her husband — launched Red Hen as a poetry “micropress,” putting out a handful of volumes of group members’ work. But in 1997, they decided to expand to prose as well, and the challenges began to mount.

Some of these were the kind of obstacles that plague any independent: Production costs. Marketing. Getting books into bookstores whose shelves were virtually controlled by distribution heavyweights. Others stemmed from Red Hen’s collective business model, which required the input of all members to move forward — a difficult organizational balancing act under any circumstances, but one that was greatly exacerbated by L.A.’s geographical sprawl and clogged roads.

“We realized we were going to need to expand out of what we were doing,” says Gale.

And so, in 2000, Red Hen set off on a path followed by many of America’s finest independent publishing houses today: They reformed themselves into a nonprofit.

The nonprofit model is uniquely suited to the aims and needs of small publishers (although they aren’t the only ones to have taken this route; academic powerhouse Oxford University Press is the largest printing and publishing nonprofit in the United States, reporting $175 million in total assets at the beginning of 2011). For independents, which must grapple for space in a market dominated by Big Five publishers whose annual sales register in the hundreds of millions, big profits are rarely an option on the table, but breaking even is a frequent concern. Becoming a nonprofit allows a press to benefit from a new stream of income: grants.

“Basically, if you’re printing fewer than, say, 5,000 copies and you’re going to sell the books at the same price other presses would, you’re going to need some grants along the way,” says Gale.

For Ren Hen, which reports an average print run of 1,000 copies, book sales aren’t enough to support the entire operation, even when they exceed sales targets (which they often do). Consequently, support from state and national organizations and corporations such as the National Endowment for the Arts, the Annenberg Foundation, the Los Angeles County Arts Commission, Sony Pictures Entertainment, and Target, as well as private individuals, has helped keep the operation afloat.

Critics who dismiss nonprofit presses as businesses that can’t stay viable in the market without being propped up by external support miss the fundamental difference between a business like Red Hen and one like Simon & Schuster. As the Council of Literary Magazines and Presses notes on its website, nonprofit presses are “mission-driven, not market-driven.” Profit matters, of course, but it doesn’t trump the reason the press exists — in Red Hen’s case, to publish diverse works of literary excellence.

Freed from some of the most constraining financial demands, Red Hen has built an impressive list of authors and books. Producing around 20 titles a year, it has grown into one of Los Angeles’ largest independent publishers and oversees three imprints: Arktoi, which publishes literary fiction and poetry by lesbian writers; Boreal, which publishes Alaskan literature and art; and the recently launched Xeno, which issues more experimental work — titles that the website describes as “books with some quirk, some niche appeal, but that also have commercial possibilities.”

Or vice versa. Some books take off unexpectedly, like Ludlow, a 2007 “verse-novel” by Coloradan David Mason about the 1914 Ludlow Massacre, in which National Guard soldiers killed about two-dozen people during the Colorado Coal Strike.

“It had legs,” she says. “That’s a book I really wouldn’t have expected to become a roaring success.”

The inherent gamble involved in producing any book aside, two developments in the past 10 years have smoothed the path for Red Hen’s growth.

The first was the deal the press cut in 2008 with the Chicago Distribution Center, under the umbrella of the University of Chicago Press, to distribute Red Hen books nationally. Gale describes the move as a “big leap forward”: Not only did it expand Red Hen’s reach, but it forced the press to tighten up its operations.

The second development concerns larger trends in publishing linked to the economic downturn. Amidst financial fears, larger publishers have become less willing to take risks on books that push the envelope or don’t fit a particular niche. Consequently, those authors have turned to independents to get their work out to readers,

“I think in the next decade, that will continue,” says Gale. “That’s worked out okay for us. I always tend to think change is good, and I think that an indie press will always throw a lot of energy behind a book.”

One area into which Red Hen has thrown quite a bit of energy and that has distinguished it from its inception is West Coast writing.

From the beginning, Gale and Cull had more than building a single press in mind;  they also had a plan to change the map of publishing.

In the past few decades, certain areas of the country have become centers of independent publishing. Minneapolis, with its renowned Graywolf Press, Milkweed Editions, and Coffee House Press, is one of the most prominent. But California’s independent presses tend to be clustered around San Diego and San Francisco, while the majority of those that existed in Los Angeles when Red Hen was founded in 1994 issued only a few volumes per year or were highly specialized.

Linked to this goal was the desire to represent a viewpoint that the pair felt had been obscured on a national level.

That Eastern preference, she contends, means that the books coming out of the New York–based Big Five publishers represent only one world view, which isn’t necessarily shared by the majority of the country. She cites poet B.H. Fairchild, a long-time California resident, as “the sort of quintessential West Coast author.”

“He’s writing about rolling cars, and Vegas, and people who are dirty. There’s this strong working- class ethic,” she says. “And the rest of [what] you see is a sense of stories that happen outdoors. The engine of the story is not just moving around in the streets of Manhattan.”

A quick look at the long list for the 2013 National Book Award would seem to support Gale’s claim of imbalanced representation. Seven of the 10 authors nominated for the prize are based on the East Coast; half come from the New York City metropolitan area. And when it comes to the books themselves, only one (Tom Drury’s Pacific) sets a significant portion of its action on the Left Coast.

To fill in that gap, Red Hen consciously supports the work of West Coast writers. In 2010, for example, the press issued The Devil’s Punchbowl, a collection of essays by California-based authors on the geography of the state.

But building “the next Paris” requires more than literary commitment; it also calls for community engagement. Over its 20-year history, from its earliest incarnation as a collective, Red Hen has turned to the community as both the source of its strength and the target of its efforts.

For its first decade and a half, the same geographical challenges that dogged the press as a collective also complicated its community-building efforts.

“We did a strategic plan a few years ago [and found that] one of the things that’s actually a disadvantage for Red Hen is that we’re in a city that’s very expensive to live in,” says Gale. “I think if we were in a smaller, less expensive town, the amount of outreach we’d have to do to make some waves, make some noise, would be less extreme.”

Nevertheless, they persisted in their attempts to make some noise. The most important of those efforts is the Writing in the Schools (WITS) program, an initiative launched in 2003 that brings authors into Title I schools to teach under-served K-12 students about creative writing and contemporary literature. At the end of the program, the press compiles the students’ writing into an anthology. Each student receives a copy, and the remainders are sold to the general public. Last year, 291 students benefited from WITS.

“It gives them access to a different kind of language and storytelling and ideas,” says Gale. “We’re learning how to communicate.”

All of these community-building efforts finally coalesced when, in January 2010, Red Hen moved its headquarters away from the San Fernando Valley to Pasadena. It was, Gale says, “a sea change.”

“There was a whole sense of civic pride,” she says. “We got much more of a sense of local community.”

Ironically, that sense of local community has coalesced as Red Hen’s national, and even international, stature has grown. The press has branched out into periodicals, launching the LA Review in 2004 to widespread acclaim. The press has traveled three times to the Guadelajara Book Fair and the premier Frankfurt Book Fair. And this February, they will host several events — one featuring Gary Snyder — as part of the annual Association of Writers and Writing Programs conference.

Whatever comes next, Red Hen seems poised to make hay while the sun shines.

“I feel that we’ve overcome some amazing obstacles in the past 20 years,” says Gale. “I think we’re moving into a new place where we’ll have a stronger presence in publishing.”

Sarah Vogelsong is a writer and editor in
Richmond, Va. Her work has also appeared in
Style Weekly, the Neworld Review
and Hometown Junket
.
You can follow her at
sarahvogelsong.com.