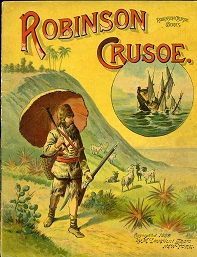 Unlike most clichés with their built-in mechanism for dodging intimacy, the desert-island query calls for interpersonal courage of the deepest sort. After all, the question isn’t: What’s your favorite story? But, most fundamentally, on which story does your very survival depend?

The cutest answer, of course, is Robinson Crusoe.

An epistolary adventure written by Daniel Defoe and published in 1719, Robinson Crusoe (notice “Crusoe” is almost an anagram for “rescue”) is the cultural artifact that put desert islands into our collective imagination in the first place.

And so the story goes: Crusoe is a young man from England who longs the see the world. His father cautions him to settle in for the safety of the middle class. (Or as it’s referred to in the story, “upper degree of low-life.”) Instead, Crusoe goes to sea.

His inaugural voyage as a sailor is harrowing. He, along with the rest of the crew, narrowly survives a storm. His subsequent journey is uneventful, but on his third voyage, he’s taken hostage and forced to be a slave at sea.

Crusoe escapes and gets picked up by a Portuguese ship on its way to Brazil. He stays in Brazil for a number of years and becomes a plantation owner. After a time, he goes to sea again, headed for the coast of Africa where he hopes to purchase slaves. En route, a violent storm overtakes the ship and it crashes onto the shores of an uninhabited island, drowning everyone on board except for Crusoe, two cats, and a dog.

Rumors among literary-history buffs have it that Defoe (a name which sounds even more made up than Crusoe) sold the story as nonfiction, using a pen name and claiming it was the diary he’d kept while marooned on an island off the coast of Trinidad for 27 years, two months, and 19 days. Today, it’s largely accepted that Defoe’s source was a sailor named Alexander Selkirk, who lived alone on an island for four-and-a-half years, and shared his story with Defoe, who was working as a journalist in 1711.

But what, exactly, does Robinson Crusoe mean to us in contemporary terms, and why has it persisted as a classic?

As an early expression of what would later be termed “rugged individual” ideology in the West (particularly in America), Robinson Crusoe endures because it’s deeply emblematic of our irrevocably atomized culture. As read in contemporary terms, this story of one man’s complete independence doesn’t glorify self-sufficiency, but shows how one might go about surviving the corresponding solitude.

When Crusoe lands on the island, he secures a dwelling and establishes a food source. But his braving the elements equates to more than just physical sustenance: Crusoe must undergo dramatic psychological conversion, and he does so by taking his moral measure.

Reflecting back, Crusoe admits, in a moving passage, that he is his “own destroyer” and a “willful agent” of misery. He looks at his life and doesn’t turn from the harsher truths of it: “But alas! for me to do wrong that never did right, was no great wonder.”

Another stage of Crusoe’s transformation involves a trial by fire. A bout of feverish delusions overtakes him (the symbol of his former self, burning off) which he ritualizes with the help of hard liquor (liberated from the crashed ship), prayer, and some raw tobacco that he hot-boxes his sinuses with, thereby blasting himself into a new attitude.

Afterward, the Island of Despair (as he calls it) is suddenly less of a prison than is the horror of his past mistakes and his current mental state. He sees that mental surrender is the true vessel to emotional equanimity, and not the physical deliverance he’s been awaiting.

Crusoe resists the romance of escape, and in doing so, he is at his wisest: “I looked upon the world as a thing remote, which I had nothing to do with, no expectation from, and indeed, no desire about; in a word, I had nothing to do with it, nor was ever likely to have.” Eventually, he renames the Island of Despair the Island of Solitude, a shift in perception that reflects a categorical acceptance of his circumstances.

In time, Crusoe comes to enjoy certain pleasures that readers might take note of: The dog he rescues from the ship stays with him and makes an excellent companion, as does a parrot he captures and tames. (The cats don’t fare so well, I’m afraid.)

He tends crops of corn and barley, and even tries his hand at beer making. Most importantly, he keeps his sense of humor: “All this while I had not the least serious religious thought; nothing but the common Lord, have mercy upon me! And when it was over that went away too.”

But Crusoe does have serious religion thoughts. Passing frequently through the moral-immoral-amoral cycle, he struggles with his faith on a daily basis, losing and finding it with the regularity of the tides, looking to his Bible for comfort, and, like many of us, calling out to God only when he needs something.

Dorothy Reno is a senior review editor and columnist for the Washington Independent Review of Books. Her short fiction has been published in literary journals such as Prairie Fire, FREEFALL and Red Tuque Books. She lives in Tbilisi, (former republic of) Georgia. She would love to hear your thoughts on Robinson Crusoe. Tweet to her at @plotwrite or respond in the comments section below. Please join Dorothy in reading Frankenstein, which will be the subject of her next column.