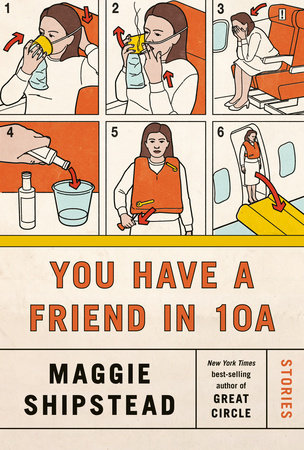 I first encountered Maggie Shipstead’s writing when I read Great Circle shortly after its publication, having recently learned about the history of women’s aviation and curious to read a fictional rendition thereof. The book was expansive and unsettling in the best way possible, somehow managing to leave me with both a sense of finality and the feeling that the story wasn’t over — would never, in fact, be over.

Because I enjoyed that first Shipstead foray so much, I jumped at the chance to review her newest work, You Have a Friend in 10A. Its stories center on people struggling with problems mundane or unusual — a famous actress attempts to escape a cult; a woman searches for the body of her lover, who disappeared while skiing — with the author’s incisive observations serving as the emotional core of each piece. In “Souterrain,” an aging man recalls a seemingly innocent memory:

“He is emerging from an afternoon nap. Piano music drifts up the stairs. His noisy dreams fall away, and the solitary, bittersweet memory draws him back into the world…He doesn’t question who is playing. The sound of the piano is as essentially his mother as the warm, lavender-smelling body that embraces him. Pulsing with low, slow chords, the comfort of her flows around him, moves through him like breath.”

Only later does the author reveal that the man’s mother long ago played the piano to comfort a Jewish family hiding in her attic — a family eventually discovered through the man’s own carelessness, though he was but a child at the time. The beloved mother who’d once embraced him with lavender warmth was arrested by the Nazis and died of typhus in prison.

Other stories are less emotionally claustrophobic but equally impactful. In “Backcountry,” a young woman assesses her aging lover and his ex-wife:

“Richie was just a guy, just a puffed-up old rooster guy, though the fact that Adelaide loved him so much raised his stock a bit for Ingrid. Poor Adelaide. No matter how ferociously she had insulted or berated him, how eloquently she had denounced his disloyalty, how incisively she had exposed the futile vampirism of his horniness (he would still die one day, no matter how young his lovers), she had been helpless to make him feel the shame she thought would balance out her suffering.”

Shipstead’s forte is delivering lines like this with cool calculation, holding us at a certain remove even from the main character’s perspective. This can, however, occasionally lead to confusion about whose opinions are being presented. Later in “Backcountry,” for instance, Ingrid reflects on her sons while they eat pizza:

“They are virginal, these boys, but no longer innocent. Their minds are already churning with muddled fantasies; they can’t possibly imagine becoming bored with a woman’s body, and yet that capacity is already in all of them, buried under their narrow, hairless chests and downy cheeks and briny pubescent odors. Maybe it’s in girls, too, but Ingrid doesn’t think so. Not in the same way.”

One hopes these are simply Ingrid’s musings and not a broader commentary from the author on sexual differences between men and woman. Nevertheless, at other moments, Shipstead captures human nature perfectly. In “The Cowboy Tango,” a middle-aged rancher tries awkwardly to seduce his young assistant as they search for missing equipment:

“Mr. Otterbausch waited for the perfect moment, the moment when Sammy was standing with her hand on her hips and saying disgustedly, ‘I don’t see any damn camera,’ and he swooped in and got her by the braid and kissed her hard on the mouth. She hauled back like she was going to punch him, but she remembered not to punch her boss right when he remembered to let go of her braid — soon enough but a little late.”

It’s likely many people can relate to the scenario of trying to counter an awkward, unwanted advance from someone in a position of power. Even if you’re not one of them, You Have a Friend in 10A is filled with the kind of tense, poignant moments that will lead you to linger over the human condition and its myriad everyday complications. I look forward to future books from this talented writer.

The Oxford Inheritance: A Novel

By Ann A. McDonald

An unusual mixed-genre tale of self-discovery and family secrets