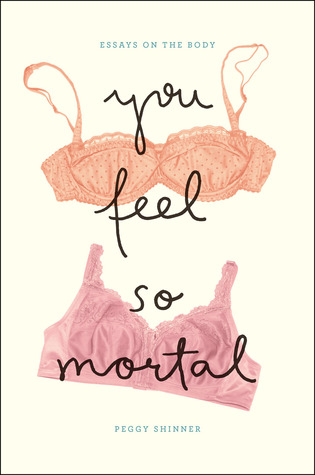 Billed as a collection of essays, You Feel So Mortal turns out to be more of an episodic memoir. This is by no means a criticism. Peggy Shinner jumps around her life and her family’s history, starting each chapter with a topic that she develops in unexpected ways. Along this journey, Shinner paints a tender and delightfully personal picture.

For a book with a subtitle promising essays on a specific topic, that theme of the human body is more pronounced in some chapters than in others. Feet, hair, nose jobs as an adolescent rite of passage — these are all clear contributors to the theme. The piece on hair is particularly stunning, and a change of pace from the other, more traditional essays — a reflection on societal constructs imposed on women’s hair (without ever resorting to such clunky language). A collection of mini-stories and simple facts about hair builds to a powerful emotional conclusion (but no spoilers here):

“Victorian women wore brooches made with the hair of their deceased loved ones. Yoko Ono cut her hair after the murder of her husband, saying, ‘John loved my long hair, so I gave it to him.’ A clipping of Princess Diana’s hair sold for ten dollars on eBay.”

At times Shinner shifts away from the physical body, but together the essays build a picture of mortality and human frailty. A knife is not a body part, but it requires a body to use it — and can sometimes be used on a body. Whether a knife is used as a martial arts weapon, a kitchen implement, or a means of self-harm, one essay shows how context informs each person’s perception of that sharp object. A Swiss army knife may be a hitchhiker’s all-purpose tool, or a means of self-defense, but is it not also a concealed weapon? And what does it mean for an American Jew to buy a German-made knife? Does it matter if it came from the same companies that armed the Nazis? “I’m trying to re-create the lines of historical culpability, but the saleswoman can’t help me…I decide to drop it, exiting with what I know to be a lie. I’ll be back, I say.”

Shinner’s writing is clear and moving. She takes up topics that many people would consider utterly trivial and mines them for echoes of broader, more important themes. Flat feet are generally just an annoyance, or an impediment to becoming a professional ballet dancer. But Shinner ties her feet to the centuries-long history of anti-semitism, disdain for a people expressed in ugly caricatures based on such trivial traits. Good posture is often thought of as a quaint obsession of a bygone era, but Shinner explores the deeper implications of attempts to cultivate “good posture,” buried now in language and unthinking social rituals.

Eventually, You Feel So Mortal turns to the ultimate question of mortality — the treatment and disposal of a dead body. In her own search, Shinner weighs the pros and cons of different cemeteries, torn in part between loyalty to her Jewish heritage and to her lover, Ann. Because Ann is not Jewish, her body is unacceptable at Shinner’s preferred burial location. Shinner struggles to let go of the treasured image of their bodies in eternal repose, side by side.

“I’d imagined that we’d be lying next to each other in the cemetery, like we lie next to each other in bed, and if we wouldn’t be chatting away as we sometimes do now, at least we’d have the tucked-in comfort of proximity.” Yet she realizes that the importance of this illusion lies in the comfort it provides as they face the inevitability of ultimate separation. The essay closes on a bittersweet note of acceptance, acknowledging that perfection is unattainable and what will be must be enough.

You Feel So Mortal is deeply personal, detailed, and thoughtful. Shinner does not apparently set out to take on large, sweeping themes, yet by showing clearly and tenderly how one person navigates this existence her book provides a window into being human — not in an abstract, conceptual way, but concretely and personally, being a specific human being. It is a delight not to be missed.

Beth Kingsley is a member of the Advisory Committee of the Center for Inquiry DC, and a member of the board of the National Capital Area Skeptics. In her day job, she is a lawyer for nonprofit organizations.

Path Lit by Lightning: The Life of Jim Thorpe