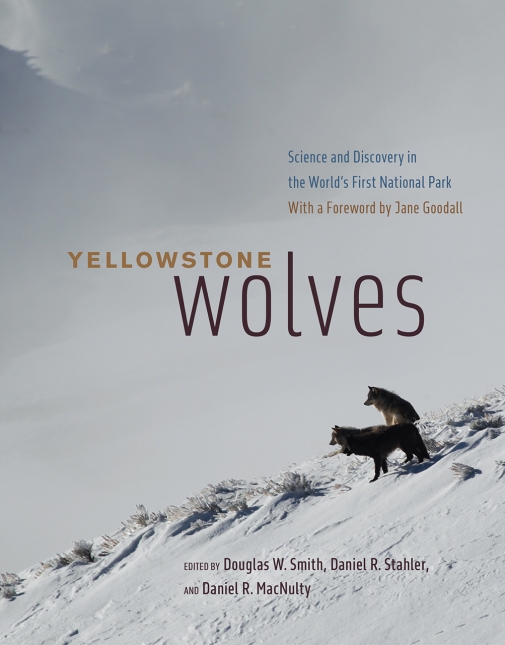 Wolf. The mere word evokes images that range from a mystical creature representing the genuine awe of the wild to a demon hell-bent on destroying livestock and livelihoods.

The truth, according to Yellowstone Wolves: Science and Discovery in the World’s First National Park, is one that science and reason — not myth — should discern. The past 25 years of studying the animal after a Herculean and successful reintroduction of wolves to Yellowstone provide bounties of both.

One common theme emanating from the book’s contributors? The effort is evolving how we humans understand wolves — their biology, behavior, place in nature, and our relationship with them. What started with bringing more than a dozen wolves from Canada to Yellowstone and releasing them into the wild has led to nearly 100 wolves now calling the Wyoming area home.

“If you are a person of faith, such work, work to save the creation, must be important,” writes the Turner Endangered Species Fund’s Michael K. Phillips, one of many essayists in the book. He continues:

“If one loves the creator, one must, in turn, love the creation. Or if you are a secular humanist who believes that the facts and empiricism matter most, they tell us that the landscapes that support myriad species, even those that are purportedly hard to live with, like the wolf, are essential to our well-being. Everyone should support efforts to arrest the extinction crisis.”

Phillips’ goosebump-raising piece is just one of many entreaties calling on us to think more deeply about what a quarter-century of new research offers not only to wolves but to we the people who make decisions that control their fate.

Edited by acclaimed wildlife biologists Douglas W. Smith and Daniel R. Stahler, and ecologist Daniel R. MacNulty, this brilliantly conceived and executed book mixing science-made-understandable entries with guest essays takes us on an intellectual and emotional journey. It guides us through America’s history of slaughtering wolves to near extinction, legitimate concerns by ranchers and hunting enthusiasts who see wolves as a threat to their incomes and ways of life, and the hard-won battle by the U.S. government and wolf-conservation advocates to reintroduce gray wolves to Yellowstone.

It also shares harrowing accounts of the wolves’ lives, the wide-ranging ecological impact wolves make on the ecosystem, and an unending trove of knowledge the return of wolves to the park is producing. In short, Yellowstone Wolves hands us a multi-lens microscope to examine the question of why wolves matter.

Sweden’s Olof Liberg sums it up when he opines the most important lesson we can learn from Yellowstone wolves is “that it was possible to actively reintroduce this controversial species to an area where it belonged, in spite of massive resistance against such a move.”

Also looking big picture, the University of Victoria’s Paul C. Pacquet states that “the Yellowstone experiment has forever changed how and what we think about wolf ecology and behavior, catalyzing a swing in attitude that favors wolves and emphasizes conservation rather than management.”

The surprisingly fast-paced chapters, complete with stunning photos and nifty infographics, drop all kinds of intriguing facts. Among them:

More goosebumps come at the end of the book, when Yale University wildlife and ecology professor Susan G. Clark explores not just wolves’ place in nature but our human place in it — and the connections between the two.

Clark concludes: “In the end, we need a much better way to make sense of the wolf as nature, and ourselves as nature. The present Yellowstone wolf controversy is an opportunity for us to learn about ourselves, gain greater awareness, and evolve the needed land ethic and responsibility for ourselves, wolves, and nature. The challenge is clear.”

Former Trust for Public Land and the Wilderness Society communications director Christopher Lancette is a Maryland-based freelance writer focused on nature and the environment. He’s also founder of a passion project at EyeOnSligoCreek.com.