An endearing debut about a teen mulling over "What's next?" 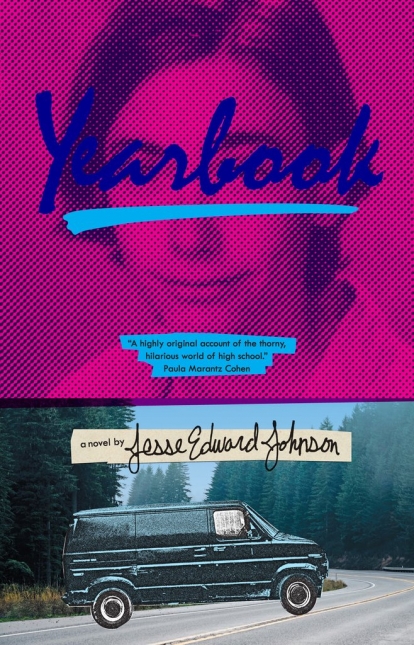 The end of high school. One last round of finals. Graduation. And yearbooks — pages of smiling classmates, of clubs, teams, and teachers, ready to be signed and inscribed, a kind of Book of Life. At least, a teenager’s life.

In Jesse Edward Johnson’s endearing debut young-adult novel, Yearbook, it’s 1996, Lester Smith’s senior year in a small high school in the Puget Sound area of Washington State. Awkwardly, and at times adorably, self-aware, Lester is in turmoil. He is also as obsessed with John Milton as he is with the Ramones.

(Yearbook opens with the two quotes seemingly in opposition to each other — one from the 17th-century poet and polemicist: “They also serve who only stand and wait”; the other from the 1980s punk rockers: “Hey! Ho! Let’s go!” — both of which reach into the soul of this angst-ridden protagonist.)

With month-by-month chapter headings, the novel dives into Lester’s tumultuous last year in high school, a year primed with questions. Should he go after his father, a failed writer who abandoned the family, moved to Minneapolis to work as a janitor, and calls at random times with unwelcome literary advice?

Maybe he should apply to college. His best friend, over-achieving Freesia, is applying to dozens of schools, and his other best friend, somewhat cloyingly referred to as “BF James,” is attending the local university. James is from an artsy African-American family originally from New York City, and their outsider status is a comfort to Lester.

Should Lester lend his limited enthusiasm to the new teacher and yearbook advisor, Mr. Traversal, who has returned to his hometown with ideas about art and literature that some — particularly the stodgy interim principal ­— see as radical? Or should he pursue his dream of going to Manhattan to see an original edition of Paradise Lost?

At times, this novel is weighed down with 1990s nostalgia, and I wonder why the author chose to set the story in anything other than the present day (except for the fact that he likely graduated from high school in the 1990s).

Yearbook certainly doesn’t read like an historic novel — or is it too soon to give something set only a couple decades ago that label? My 17-year-old son often accuses me of being trapped in the past. “This isn’t the 1980s or 90s, Mom,” he’ll say at least once a week, especially when I’m jabbing at my smartphone and asking for help with an app.

It’s a past that feels like yesterday to me, but to my son and other YA readers, it may be one as burdensomely ancient as Milton — and the Ramones.

Ultimately, Yearbook is a promising debut. The writing is crisp, with a clever bent toward the literary. Be ready to root for Lester and his misfit group of soulful companions in this charming summer read ideal for any high-schooler ever planning to be in a yearbook.

Caroline Bock is the author of the critically acclaimed young-adult novels LIE and Before My Eyes (St. Martin’s Press). This summer, she will lead a workshop, START YOUR YA NOVEL, at the Writer’s Center in Bethesda, MD, beginning on July 18. For more information, visit www.writer.org.

A Dangerous Business: A Novel

Winning elements fail to coalesce in this disappointing frontier whodunit.