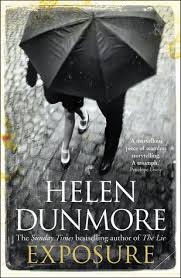 Helen Dunmore’s new novel, Exposure, takes us to England during the Cold War, and into the lives of a civil servant and his family as they grow entangled in a spy drama for which they are completely unprepared.

The children are the only ones who don’t harbor dangerous secrets — their father, Simon, has a past he is hiding, and their mother, Lily, has concealed her former identity as a German Jew, working hard to bury it under the veneer of middle-class English life.

But an even bigger secret, involving high-level military espionage, comes into their lives by accident, and the plot follows the nuances of the characters’ thoughts and actions as they try to navigate and survive this new, terrifying world.

The genius of Dunmore’s book is that it is not just a spy novel, or just a story of a family, but both. It combines taut suspense from cover to cover with a portrayal of complex, unique characters and a family as particular as any other in fiction or real life.

We watch Simon and Lily, guided by their distinct personalities and also by the roles society has given them, as they take different paths to hold their family together. Simon, as the stoic father and provider, keeps too much from his wife and kids and pays an enormous price, while Lily, in her determination to shield her children at all costs, discovers she cannot protect them from everything.

Lily is the moral heart of this book, surrounded by others whose shortsighted, selfish decisions she cannot control. She is fierce and stronger than she knows, but her decisions, too, are questionable because all choices driven by the terror of exposure are ultimately doomed.

Trust is a casualty of the fear of exposure; it cannot survive the toxicity of secrets, even in a loving marriage. Paul wonders, “So why doesn’t he confide in Lily? He trusts her completely, far more than he trusts himself. Lily is everything. She is the still point in his turning world.” The book offers a meticulous exploration of how people live with secrets, and how they fall apart because of them.

Dunmore captures the children’s view of events in ways that ring remarkably true. Ten-year-old Paul “hates it when grown-ups pretend that awful things are straightforward and even somehow good for you.” He and his 9-year-old sister, Sally, “hate those books where there’s a mystery but the children solve it and they all go home for tea.”

Dunmore can get inside the head of anyone, at any age — teenage girls, for example: “They scrutinize the young teachers, taking in every detail of their clothes, their hair, the rings on their fingers. Their eyes rake for clues. Adult life is a mystery which captivates them and repels them in equal measure. How are they going to become women?”

Yet for all this focus on the particularities of human experience, Exposure is a spy story. It’s a nostalgic one, set in a time before intelligence went electronic, before Edward Snowden, before the Darknet. It’s 1960, an era of paper files and briefcases, of left-luggage offices and cameras with film in them. The novel features a classic villain, thoroughly evil but, in Dunmore’s hands, believable.

Exposure is powerfully atmospheric, with cold and wind and darkness shivering through its pages. Moody pictures of London mirror the inner landscape of the characters; at one point, Simon notes, “The Thames looks dangerous as it slides about in the dark, sucking at its bridges.” And like any good spy novel, Exposure has a strong ending. In its breathless final pages, the story, and its lessons, become transcendent.

Sally Shivnan’s fiction and essays have appeared in the Georgia Review, Antioch Review, Glimmer Train, and other journals, and her travel writing has been featured in anthologies including Best American Travel Writing, as well as in the Washington Post, Miami Herald, Nature Conservancy Magazine, and many other publications and websites. Her short-story collection, Piranhas, & Quicksand, & Love, will be published fall 2016. She teaches at the University of Maryland, Baltimore County (UMBC).