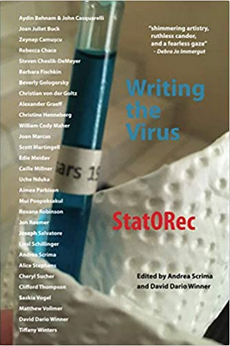 Over the last few months, a poet friend and I have ruefully admitted that for all its disruption and devastation — the pandemic has been kinder to writers than other artists. Social distancing is an occupational hazard even when the world is healthier. Without downplaying the real suffering and distress recounted in this volume, the writers here have taken up the inherent responsibility in that truth and — working from a wide variety of places and perspectives — provided a fruitful and enlightening look at 2020 so far.

Writing the Virus is a collection of recent work from StatORec, an online journal of essays, poetry, and fiction edited by novelists Andrea Scrima in Berlin and David Dario Winner in Brooklyn. StatORec’s aim — embedded in its title — is to provide a “statement of record” that responds to current events, ideas, and trends.

Since April, the site has concentrated on responses to covid-19 and the Black Lives Matter movement. Writing the Virus assembles 31 pieces from this time and provides readers with a dizzying variety of perspectives and issues to think about. There are reflections on daily life, fear, the power of this illness, and — perhaps most consistently — hope.

The collection opens with a series of diary entries from three writers recounting the day-to-day realities of the pandemic. Scrima recounts its early days in Italy, how rapidly the virus moved from local problem to international crisis. Matthew Vollmer’s “Quarantine Diary” takes a more quotidian tack, highlighting small absurdities like a group of exotic dancers applying for economic aid or his own attempts at family unity when everyone is wearing earphones and living on Zoom.

And Joan Juliet Buck takes us from April 2 to mid-May, chronicling her ongoing fears about maintaining an income as a writer as she is forced to give up her office and face the possibility of emptiness, all while also taping Governor Andrew Cuomo’s daily briefings and battling a New York Times delivery service determined to dump her newspaper in puddles.

There are several pieces that explore how the virus affects what might be called pre-existing conditions. Tiffany Winters gives us a tragic account of her mother’s death after a long-hoped-for liver transplant is delayed and then denied. The official reason is kidney failure, but Winters makes a strong case for this as an uncounted covid-19 fatality.

Barbara Fischkin battles a different kind of pre-existing condition. Her adult autistic son has been housebound since March — no longer allowed to take part in activities that stimulate his thinking and calm his nerves and prevented from even taking walks with his parents. Her essay is a thought-provoking reminder of the infinite ways this virus causes suffering.

In Christine Henneberg’s account of her work as a physician in an abortion clinic in California, pain becomes a lens for examining the condition of women generally. The emotional toll that accompanies the physical pain and fear of disease and assault is made palpable by Henneberg’s account of her patients’ habit of apologizing when they feel pain, an acute reminder of the emotional burdens thrust onto women.

Perhaps the most important example of ways the pandemic has interacted with and exacerbated other aspects of life are the pieces that respond to George Floyd’s murder in Minneapolis and the resulting protests. Clifford Thompson narrates his return to the clarinet during the nightly noisemaking in his Brooklyn neighborhood, somewhat sheepishly and humorously comparing his handling of the instrument with the famous portrait of Malcolm X at a window with a gun.

Caille Millner reflects on the particular fears of Black mothers, finding that the solace within rituals of handwashing and mask-wearing, of feeding and changing her newborn, are deepened by John Coltrane’s masterpiece “A Love Supreme.” Similarly, a number of other pieces explore the role of art and literature in this new world. Liesl Schillinger, for instance, searches for clarity in the literature of plagues, from Boccaccio’s Decameron to Camus’ The Plague and Saramago’s Blindness. She repeatedly finds that plagues are caused as much by a community’s loss of faith in itself as by pathogens.

Joan Marcus comes to a similar conclusion in her critical re-appraisal of Laura Ingalls Wilder. While the Little House novels may not spring to mind when thinking about pandemic and protest, Marcus indicts their reinforcement of America’s mythology of individualism, contrasting the headstrong characters of The Long Winter to her own fear and sense of powerlessness. She recognizes that none of us can fight this disease alone; the devastation to America “is what happens when you don’t have steady, proactive, central leadership.”

An entirely different exploration of literature and art comes through writers reflecting on their own practices. Jon Roemer is a novelist now worried about the relative importance of the novel. For musician Steven Cheslik-DeMeyer, such worries may be a luxury he cannot afford. How will live performers even make a living in a world where theaters are shut down?

Further afield is Alice Stephens’ account of Isamu Noguchi’s World War II internment in a camp for Japanese Americans. Noguchi was horrified by the experience, but it pushed his sculpture from straightforward busts toward the abstraction that would make him famous. In Stephens’ telling, this is cause for hope.

Perhaps the strongest endorsement of the collection may be the fact that some of my favorite pieces — including Winner’s humorous account of trying to exercise without becoming anti-Semitic; Aimee Parkison’s dark discussion of the politics of gun-toting and mask-wearing from the parking lot of an Oklahoma Walmart; and Rebecca Chace’s thoughtful reflection on our relationship to covid-19 victims, racial violence, and poverty — have gone unmentioned so far.

Throughout, Writing the Virus explores the relationship between creative endeavors and hope. Writers leave the city to find the peace to work but return for the vital energy of home. Artists risk failure in the quest for a sense of control. We all fight to stay open to the present as a way of preparing for the future.

This is clearly not the best of times, but this anthology chooses hope, even at the risk of appearing delusional. The entire volume is a reminder that, as Camus’ Dr. Rieux — here quoted by Schillinger — said, “The habit of despair is worse than despair itself.”

The Rise and Fall of Adam and Eve

The influential theorist who founded new historicism delivers his take on the West’s origin story.