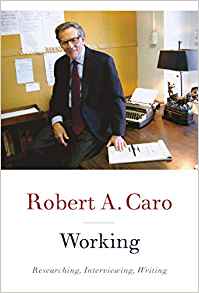 The topic of who wields political power preoccupies many Americans. Who is in? Who is out? Who is likely to win this campaign or that battle? But the real issue is how political power is achieved, used, and maintained. That has attracted observers since Machiavelli, but few have explained it as well as Robert A. Caro.

Caro is a writer who counts as royalty among biographers and is, perhaps, the king. His massive book on New York City builder Robert Moses, The Power Broker, and his volumes on Lyndon Johnson are classics, and both men have come to be defined by Caro’s works.

His books are comprehensive — embodying rich detail and sometimes quotidian accounts — and famously years in the making. (The latter is due to the author’s desire to tell the whole story — not just of influential men, but of those affected by that influence.) The fourth volume of the LBJ biography, The Passage of Power, was published in 2013, and readers continue to wait for the final installment, whose release date is unclear.

As anticipation grows for the denouement of this consequential presidency’s chronicling, Caro has written a slim volume which describes his life as a biographer and his approach to the craft. He tells us that a larger, more comprehensive memoir is envisioned, but, at 83, he is uncertain whether that will happen. For now, Working gives a quick but insightful primer on how to write biography.

The book is a compilation of previously published articles and new essays. We are given glimpses of a writer whose work as a journalist and author employs the best skills of a detective. An early mentor gave him a guiding principle: “Turn every page. Never assume anything.” For decades, Caro has used that admonition to press a little harder, to find the people and documents which tell as complete a story as possible.

His books are about often ruthless, larger-than-life men who achieved great success, one as city/regional builder and bureaucrat, and the other as a state and national elected official. For Caro, these utterly fascinating case studies are merely a means to understand how power, whether for good or bad, is used. He says that, throughout his life, he has wanted “to explain how things really work.”

Two characteristics emerge from Caro’s commentary: persistence and meticulousness. Whether in researching documents or, more especially, in tracking down interviewees and grilling them, he is like a dog with a bone — he pushes until he gets what he believes is the last possible detail and the definitive explanation.

With Robert Moses, that entailed not only researching the man but also the people whom he impacted. Perhaps the best example was his pursuit of former residents of the East Tremont neighborhood who were ruthlessly displaced by Moses.

Two fascinating vignettes on Caro’s pursuit of evidence about Lyndon Johnson also stand out. One was his effort to understand why Johnson suddenly became a powerful congressional player in October 1940 when he was a 32-year-old junior member of the House of Representatives.

Acting on a tip, Caro sifted through some less-than-obvious document boxes at the mammoth LBJ Library; again, he practiced good detective work. There, he found telegrams which showed that Johnson became a conduit for dispensing campaign contributions from the powerful Texas engineering firm of Brown & Root for the general election.

The other example was how Caro tracked down an election official who was responsible for stuffing the ballot box in one county — then perjured himself over it — during Johnson’s senatorial campaign in 1948; Johnson won the election by 87 votes.

Not only did Caro find Luis Salas, who had moved back and forth from Mexico, but he also was able to photocopy a previously unknown, unpublished memoir from him which documented his actions. Caro thus proved that LBJ stole the election.

Throughout the book, Caro gives credit to his wife, Ina, who has been his research partner since the 1960s. They work beside each other in libraries, combing through out-of-the-way files and meeting with people associated with their subjects. In fact, the Caros moved to Texas and lived among people in LBJ’s Hill Country, with Ina often providing the interpersonal skills to get locals to open up about their experiences.

Caro’s meticulousness is seen in his writing process, too. He pens initial drafts by hand and then types them on his Smith Corona Electra 210 typewriter. (I feel a certain kinship with him, occasionally, when using a 120 model.) He makes multiple revisions while adhering to a brief synopsis and also refers to a detailed outline posted on the wall of his office near New York’s Columbus Circle.

He even writes while dressed in a tie and jacket to remind himself of the seriousness of his work. Caro is definitely old school, but as all writers will attest, it’s important to adhere to what works for them. And whether writers themselves or not, readers who appreciate fact-based narrative writing and its role as a teaching tool will find Working to be a gem.

Joseph A. Esposito, a writer, historian, and educator, is the author of Dinner in Camelot: The Night America’s Greatest Scientists, Writers, and Scholars Partied at the Kennedy White House (2018) and is currently working on a book about John F. Kennedy and Robert Frost.