Without You, There Is No Us: My Time with the Sons of North Korea’s Elite

A Korean-American writer teaching at a boys’ college in Pyongyang discovers the tragic human costs of life in a repressive regime. 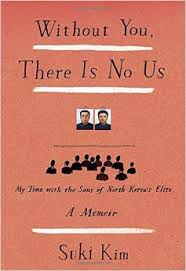 At a time when the memoir often struggles for literary respect, Suki Kim demonstrates just how powerful the genre can be in the hands of an abundantly talented writer. In Without You, There Is No Us, an account of her six-month teaching stint in North Korea, Kim has skillfully combined journalism with graceful language and the thoughtfulness of an essayist to create a work that resonates far beyond her personal experience.

Kim won acclaim a decade ago for her debut novel, The Interpreter. Around that time, she began traveling to North Korea on magazine assignments. Wanting a more sustained look at life inside the country, she took a job teaching English at the Pyongyang University of Science and Technology (PUST), which caters to the privileged sons of the country’s ruling elite.

She went in 2011, when all universities in North Korea had been shut down for a year and the students sent to work in construction fields — except for the 270 students at PUST. Kim soon discovers that the young men are nonetheless faithful “soldiers and slaves.” The book takes its title from their thrice-a-day ritual of marching in a double line around the school’s walled compound singing praises to then-ruler Kim Jong Il: Without you, there is no motherland. Without you, there is no us.

After a few weeks in the classroom, Kim understands, with chilling clarity, the cult-like group identity embodied in the anthem. “Here there was no ‘I,’” she writes. “Even ‘we’ did not exist without the permission of their Great Leader.” Teaching in such a place seems absurd, for “the true sealed border was in hearts and minds.”

Any book on North Korea is bound to be layered in absurdities. Here they begin with the assignment that takes Kim to Pyongyang in the first place. She teaches at a university founded and staffed by evangelical Christian missionaries under a regime hostile to religion. She doesn’t share their faith, a fact her colleagues seem mysteriously not to acknowledge. Nor is she even a teacher, but rather a “writer disguised as a missionary disguised as a teacher.” That she was hired at all Kim attributes to the school’s disorganization in its first year of operation.

Kim recognizes from the outset the constraints she faced: “I had traded my voice to be there.”

She stores her typed notes on a thumb drive she can keep with her at all times. The repressive measures of daily life are much as expected. There is no free flow of news; letters and phone calls are censored; classrooms and every movement are monitored around the clock; Kim and her fellow teachers cannot travel beyond the school except on scheduled outings in the company of “minders.”

A note of brightness in the bleak prison-like existence is the rapport Kim develops with her students over meals in the dining hall. With restricted access to information, they boast to her of North Korea’s superiority in everything from technology to soccer. No ideas not sanctioned by the regime can be discussed, and the boys are well disciplined at self-censoring.

As the weeks pass, however, an irrepressible curiosity leads them to nervously broach topics that are off-limits. Aware of the dangers of such exchanges, Kim must finesse her answers to their questions — about Western culture, American politics, and other aspects of life outside North Korea.

Planting seeds of doubt is a risky business, and it troubles Kim to think of the consequences her students could face. What good can it do to question anything in a regime that demands unwavering obedience?

In Without You, Kim has produced a compelling work of journalism. But the story is far richer as memoir. Divided Korea serves as a metaphor for the author’s own split sense of identity as a South Korean who immigrated to the United States at the age of 13 after her father lost his fortune. “When you lose your home at a young age, you spend a lifetime looking for it,” she writes.

Kim grew up with stories of relatives — her mother’s brother, two young female cousins of her father — who were abducted and taken to North Korea, never to be heard from again. North Korea feels oddly like home, but disorienting. “I identified with it in a way that I could never shake off,” she says.

In the recesses of her mind, Kim harbors the fantasy that one day Korea will be reunified. An especially moving section of the book shows her gradual disillusionment, which is intertwined with an ambivalence toward her students.

Kim grows fond of the boys, and they, in turn, seem smitten with her. Yet she feels a repulsion, as well, for the ease with which the young men tell lies — “clumsy” lies, ridiculous lies, often told with the backing of their classmates. Do they do it from habit, having been told lies as children, or can they not distinguish between lies and truth? Whatever the explanation, Kim knows she can never develop a relationship with them based on trust. The boys become a proxy for the nation and its epic fraudulence.

The author describes, in a poetic passage, her heartbreaking realization of how irreparably broken the two Koreas are:

“On that evening, as a sun the color of mournful pomegranate fell behind the [tower], behind the smoke stack, behind this city, this school, behind the children of the elite who were now my children for a brief time, these lovely, lying children, I saw very clearly that there was no redemption here.”

The small and intimate story that Kim relates in Without You shows with piercing intensity the effects of North Korea’s totalitarian politics on real lives. More universally, it conveys the tragic loss of human potential and creativity that comes from never being allowed to think for oneself.

Diana Parsell is a writer and editor in the Washington, DC, area now working on her first book. It tells the life story of Eliza Ruhamah Scidmore, a 19th-century journalist and travel writer who initiated the idea of planting Japanese cherry trees in the District. Visit the book's blog here.