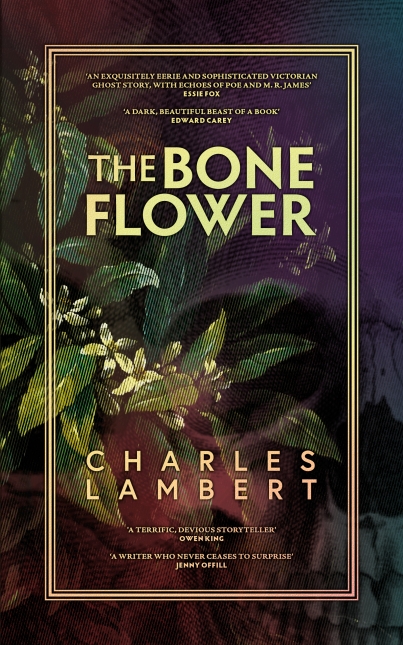 It’s difficult to know what to make of Charles Lambert’s eerie, fast-paced The Bone Flower. On one hand, the novel’s spine-tingling scenic descriptions and compulsively readable prose combine to draw the reader in; on the other, a lack of good editing, as well as significant plot inconsistencies, creates confusion.

At the book’s opening, six gentlemen sit around a fire at their club in 1880s London, discussing — alternately with ridicule and awe — supposed supernatural occurrences. As a result of this conversation, a few of them attend a séance, during which the medium predicts “danger” for Edward Monteith, the youngest of the group, adding that her spiritual guide “sees an earth floor, cold and hard, tamped down by uncaring feet. And fruit; there is the smell of fruit gone bad. There is something rotten, something that only love can heal.”

Outside on the street beforehand, and then again in the medium’s chambers, Edward’s eye is drawn to a beautiful young Romani flower seller, Settie, who turns out to be the medium’s daughter. When they find themselves alone, Edward approaches Settie and makes an appointment to meet her at a nearby cemetery the next day.

Their romance blossoms apace, and Settie is soon pregnant. Edward, who’s been postponing introducing her to his father — who would not approve of a Romani woman — is horrified. Dr. Frederick Bell, a disreputable acquaintance of Edward’s who also attended the séance, offers him a way out: Bell will provide a miscarriage-inducing tincture with which Edward can lace Settie’s drink.

Edward initially recoils but eventually consents. The plan, he believes, will offer him and Settie the best chance at future happiness.

But all does not go as planned. When Settie ingests the tincture, she experiences not only the beginnings of a miscarriage but also violent spasms. Edward rushes her to the equally disreputable doctor whom Bell has recommended. Alas, it is for naught:

“It could only have been a matter of minutes. And then Settie sighed, the longest sigh he had ever heard, all the air in her body slowly escaping, as though fleeing from her, and it was her life breath that had escaped he realized later, when it was too late and she was dead.”

Nearly two years later, Edward is beginning to recover from his grief — if not his guilt — and has married a vivacious young Italian woman named Marisol. He reveals nothing about his past, although she intuits that he has one. When Marisol becomes pregnant, Edward convinces himself he is elated. He agrees to bring Marisol’s old wet nurse, Concetta, from Italy to stay with them and help with the infant.

Yet when baby Tommaso is born, problems arise almost immediately. Concetta seems to think the boy is possessed by an evil spirit, and even Edward and Marisol cannot deny that he sometimes behaves as though he were significantly older, speaking and walking at an age when such things should be impossible. He also occasionally answers to the name Enoch, which Edward is horrified to learn was Settie’s father’s name.

Edward blames Tommaso’s unnatural behavior on Concetta, who has been performing rituals to purge the boy of possible demons. Although he demands many times that she be dismissed, she is allowed to stay for some unexplained reason.

At night, Edward hears a “low, insistent, fretful” crying, which “continued, like a wilful [sic] demand for his attention, until he thought he would go mad.” Although he tells himself it’s his imagination and lingering remorse over Settie’s death, it turns out Marisol can hear it, too. This adds to the constant feeling of dread and confusion encircling the family.

There is, indeed, a malevolent force about. And when Marisol begins to experience her own odd moments, Edward realizes he’ll need to confront his past head-on if he hopes to save his family’s future.

Its character and plot discrepancies aside, The Bone Flower is a quick, engaging read perfect for anyone in the mood for something masterfully spooky.