A delightfully subversive — and subversively delightful — look at the world of kids’ books. 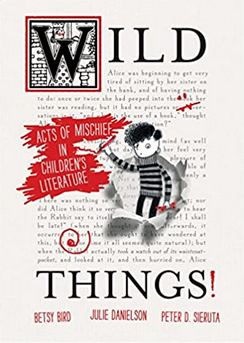 “Every year, just a moment before Christmas, millions of Americans named Uncle George race into a book store on their only trip of the year.
“‘I want a book,’ they tell the salesman, ‘that my nephew Orlo can read. He’s in the first grade. Wants to be a rhinosaurus hunter.’
“‘Sorry,’ said the salesman. ‘We have nothing about rhinosauri that Orlo could possibly read.’
“‘OK,’ say the millions of Uncle Georges. ‘Gimme something he can read about some other kind of animal.’
“And on Christmas morning, under millions of Christmas trees, millions of Orlos unwrap millions of books…all of them titled, approximately, Bunny, Bunny, Bunny.
“This causes the rhinosaurus hunters to snort, ‘Books stink!’”

— Dr. Seuss, How Orlo Got His Book

In a field where so many bunnies abound, it can be hard for children’s books to be taken seriously. In Wild Things! Acts of Mischief in Children’s Literature, authors Betsy Bird, Julie Danielson, and Peter D. Sieruta more than take these books seriously; they offer an in-depth look at the history of children’s literature and the genius therein.

This isn’t, however, your typical textbook. This collection of essays reads more like a personal conversation with fellow kid-lit lovers, in which the discussion turns from informed and passionate to salacious and snarky in the blink of an eye. In other words, it’s a great conversation.

Bird, Danielson, and Sieruta, each children’s book experts in their own right, team up to divulge little-known facts about the world of children’s literature that might otherwise be lost to history. They not only lament the cloying bunny archetype, but strive to provide a fuller picture of the personalities behind kids’ books through amusing, enlightening, and sometimes dark anecdotes.

At its core, Wild Things is an ode to work that is too often trivialized, and it celebrates these stories for their true value to society. Short chapters connect an assortment of bookish miscellany, including subversive literature, LGBT authors, book banning, celebrity authorship, and the “Post-Potter” world of kids’ lit.

These are punctuated by behind-the-scenes interludes that cover material primed for dinner-party conversation — did you know the world almost had a version of The Hobbit illustrated by Maurice Sendak? — and debates among the authors that keep the text rolling.

All told, the text covers well over 100 writers, including Theodor Geisel, Margaret Wise Brown, Shel Silverstein, and E.L. Konigsburg. Brief narratives — sometimes charming, sometimes scandalous — are culled from biographies, interviews, and firsthand discussions; thorough source notes, a bibliography, and an index are included at the end.

Wild Things brings to the table often-unexplored insights into the lives of those who write for the most impressionable among us. The saucy and irreverent discussion covers everything from plagiarism to murder. You probably know of the ongoing efforts to sanitize the works of Mark Twain, as well as the brouhaha Judy Blume’s books tend to stir up. You might even know the exact word that appeared on the first page of the 2007 Newbery Medal-winning book that caused a collective gasp (and maybe a few giggles).

But Bird, Danielson, and Sieruta go farther than offering up trivia to illustrate that even some of the most virtuous authors in children’s literature have led fuller, more risqué lives than the public might realize. Not even the wholesome Berenstains went without some under-the-sheets antics along the way.

Wild Things incorporates a respectable amount of information, and the authors’ voices blend seamlessly. Still, one serious omission is their too-limited discussion of race in children’s books. Race is a topic trending in the book world, as authors of color continue to struggle in obtaining representation within the industry. While the subject could arguably fill volumes, even a concise overview would have been worthwhile here.

Though Wild Things might not become the go-to reference book for your eighth grader’s next school report, its tasty morsels add up to a thoroughly entertaining meal for those inclined to the fine art of children’s literature. It will leave kid-lit lovers satisfied, and even avid readers of the genre with a laundry list of titles to revisit with new eyes.

Kari Kelly is first and foremost a lover of children’s literature and a bookseller at Curious Iguana in downtown Frederick, MD. Over the last 10 years, she has advocated for children, libraries, books, and the community in various roles. She thinks there is no greater joy than settling down for quiet reading time with her husband and daughter in their century-old home, which is bursting at the seams with books.