The History and Uncertain Future of Handwriting

This detailed account of a dying art is too quick to dismiss our most personalized form of communication. 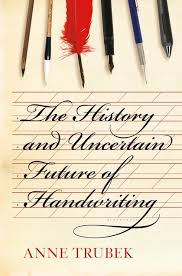 In The History and Uncertain Future of Handwriting, Anne Trubek tells a lively tale about an unlikely subject. Her book takes the reader into Sumerian schools where wellborn young boys were taught to make cuneiform marks on clay tablets; into scriptoria where overworked medieval monks produced glorious illuminated manuscripts; and then on to 19th-century business colleges where, with religious zeal, penmanship gurus trained students to festoon their papers with elaborate loops and flourishes. But in the end, Trubek is too quick to dismiss handwriting instruction as a quaint and useless relic of a bygone era.

Some of what Trubek has to say about the development of writing has been said before. If you’ve read Nicholas Carr’s bestseller The Shallows, it won’t surprise you to learn that the ancient Greeks and Romans thought it unnecessary to use punctuation or leave spaces between words, or that people routinely read aloud to themselves until at least the 4th century CE. If you’ve read Stephen Greenblatt’s The Swerve, you will have already heard about the remarkable rise of the gifted scribe Poggio Bracciolini.

Still, Trubek tells the familiar tales well, and she adds appreciably to the accounts of those who have touched on the subject of handwriting elsewhere. Her descriptions of the political and sociological ramifications of handwriting through the ages are particularly intriguing.

The Egyptian hieroglyphic writing system was so difficult that only a tiny fraction of the population mastered it, ensuring that the vast majority of the population remained illiterate — and relatively powerless. In medieval times, different types of script — capitalis, capitalis rustica, uncial, half-uncial, minuscule, Carolingian minuscule, Gothic, humanist — had different political connotations, some associated more with ancient Rome and others with Christianity.

By the 16th and 17th centuries, different scripts were associated with different classes, genders, professions, and purposes. Most elite Europeans used one script when writing a personal letter and another for a legal document. In England, the “chancery hand” used for some court documents was illegible to anyone who hadn’t been trained in it.

Early Americans soon asserted their orthographic independence by developing their own script, called round hand or copperplate, which introduced the long “s” — shaped like a lowercase cursive “f” — that we see in documents like the Declaration of Independence.

But for all her meticulous recreation of handwriting’s long history, Trubek dismisses her subject’s “uncertain future” in a few breezy pages. Instruction in cursive has been on the decline since the 1970s, and the Common Core education standards — adopted by over 40 states — call for teaching legible writing in the early grades, but not necessarily cursive. To many, it seems that in our technology-dominated age, it’s far more important to teach students keyboarding skills.

Trubek compares those who bemoan the loss of handwriting today to those in past ages who warned of ominous consequences from previous technological innovations. Medieval monks who made their livings copying texts onto parchment warned that Gutenberg’s newfangled printing press would produce inferior books that were more likely to decay. Even the spread of writing itself produced critics — Socrates among them — who claimed that if people started to write everything down, their memories would atrophy.

One Louisiana state representative who introduced legislation requiring schools to teach cursive every year beginning in third grade justified the move by saying that it was “really discouraging to get a note from a college graduate that is printed like a second-grader.” In Alabama, the sponsor of a law requiring cursive instruction by the end of first grade argued that “it’s really an art form that personally identifies you.”

But in consigning cursive to the ash heap of history, Trubek gives short shrift to the scientific studies suggesting that learning to write in longhand carries unique cognitive benefits. “There is no convincing empirical evidence that handwriting is cognitively superior to keyboarding,” she writes in a chapter on “The Science of Handwriting” that spans all of five pages, “although some make that claim.”

Indeed, some do. One set of studies, for example, shows that the best predictor of academic ability for young children is how well they can copy a complex figure freehand on paper — which is, essentially, what handwriting requires. The theory is that this kind of copying involves both planning and execution, two skills that serve students well. In addition, a child’s inevitably imperfect first attempts to copy letters help reinforce the abstract concept of what letters stand for: A messy “a” is still an “a.”

While those findings don’t necessarily argue for cursive instruction — printing might serve the same purpose — other studies do. One study conducted in 2015 suggested that cursive gives children advantages in both spelling and composing, perhaps because the connecting strokes between letters help children see groups of letters as words.

Another recent study showed that people who take notes by hand absorb and retain more information than those who type, apparently because the typists are more likely to simply transcribe what they hear without processing it. When you take notes by hand, you have to decide what’s actually important and worth noting. And taking notes in cursive rather than printing enables you to write faster.

Perhaps none of this adds up to definitive proof that cursive is worth keeping. But, as the cognitive scientist Daniel Willingham has observed, “before we jettison a year of practicing something that might aid cognition substantially, we should be sure it's disposable.”

Natalie Wexler is an education writer who is currently working on two books. One will look at how the narrowing of the elementary-school curriculum to reading and math skills has had detrimental effects on students from less-educated families. The other, co-authored with Dr. Judith C. Hochman, will set out a method of combining writing and subject-matter instruction for students in first through 12th grades.