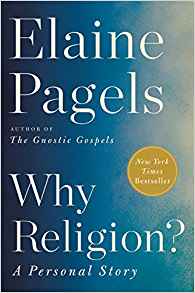 Why religion? It’s a fair question to pose. And it’s one that scholar Elaine Pagels has been asking for almost her entire life, in one way or another.

Combining Pagels’ vast experience studying religious history as a discipline and her own life experiences, Why Religion? invites readers into her personal narrative in order to question their connections to religion in the 21st century — and, perhaps, to learn something new about the human condition.

The author of eight books on religion, including The Gnostic Gospels, Adam, Eve and the Serpent: Sex and Politics in Early Christianity, and The Origin of Satan: How Christians Demonized Jews, Pagans, and Heretics, Pagels approaches religion from her position as an historian — although she calls herself “incorrigibly” religious, as well.

Using a trope found in coming-of-age memoirs, she expresses the jolt of learning the world wasn’t really as it had been described in sermons: “Those of us who grew up in California’s suburban cocoon were shocked to see racial hatred erupt from Arkansas to Berkeley, and to realize that war was not, as we’d imagined, the patriotic cause publicly preached, but a disastrous blunder, perhaps even a crime.”

This split in her understanding of the world — an awakening, or reawakening, of sorts — becomes relevant to religion as much as politics, to ritual as much as to grief in this book. These moments where we arrive at new understanding are difficult, yet that is how growth occurs. Perhaps one of the ways to comprehend her title’s question is to instead ask: What is my understanding of religion now, and in what ways is it incomplete?

In this memoir, one of the early puzzles is this statement: “What matters to me more than whether we participate in institutions or leave them is how we engage with the imagination — in dreams, art, poetry, music — since what each of us needs, and what we can engage, obviously differs and changes throughout our lifetime.”

This focus on art in a book about religion feels like an unexpected connection. But it is also intriguing, offering ways for those readers who are not religious to engage with a wider understanding of spiritual practices.

Still, Pagels relies on religion to understand the call to imagination and inner life:

“Although for years I’d loved poetry, from John Donne and Christina Rossetti to Emily Dickinson, Walt Whitman, and C.K. Williams, I began to write poems only after I had entered spaces that those strange, impossible Bible stories opened up, offering paths that led beyond the reach of my family, the beige living room, uncomfortable silences at the dinner table.”

Pagels stumbles into “Harvard’s doctoral program in the study of religion, which offered opportunities to study Judaism, Christianity, Buddhism, and Hinduism,” where she has access to newly uncovered texts like The Gospel of Thomas and The Gospel of Mary Magdalene. Here, her connection between religion and the arts becomes clear:

“What I love about sources like the Gospel of Thomas is that they open up far more than a single path. Instead of telling us what to believe, they engage both head and heart, challenging us to ‘love your brother as your own life,’ while deepening spiritual practice by discovering our own inner resources.”

Why Religion? invites readers into a house of questioning, offers stories of Pagels’ understanding of grief and death — of a childhood friend, of her only child, and, a year later, of her husband — combined with her deep-seated grasp of the study of religion and human culture.

Those well-versed in their own spiritual traditions will likely learn something new here, and those who tend to stay away from religious organizations will appreciate getting the perspective of an academic, a wife, and a mother who uses a balanced tone to dig into questions worth asking.

Jenny Ferguson is Métis, an activist, a feminist, an auntie, and an accomplice with a Ph.D. She believes writing and teaching are political acts. Border Markers, her collection of linked flash-fiction narratives, is available from NeWest Press. She is the creative-nonfiction editor and à la carte blog editor for carte blanche, where she welcomes pitches for blog posts from BIPOC, QT2S, and disabled writers, as well as writers from other marginalized communities.