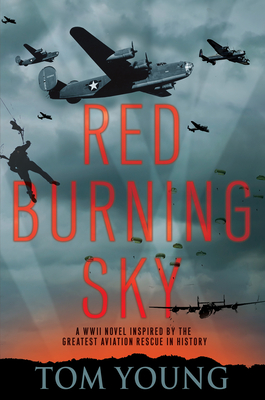 Red Burning Sky is a fictionalized retelling of the real-life Operation Halyard, the largest rescue of stranded airmen in U.S. history. It happened during WWII in the summer and fall of 1944, when American aircrews flying C-47s rescued more than 500 downed Allied airmen in Yugoslavia. By narrating the events as fiction, author Tom Young is able to take the reader into the heads of the various characters, American and Serbian, to good effect.

The story takes place in a war within a war. While all the Yugoslavians fought against the Nazis, they were divided between themselves as Serbian Chetnicks and Partisans. The Chetnicks’ name originated as a derogatory term derived from the Serbo-Croatian word cheta, or guerrilla detachment. The Partisans were communists allied with the USSR and led by Josip Broz Tito. The two factions fought each other until Tito was finally victorious, long after the end of Operation Halyard.

The novel covers a period of only eight weeks. It portrays the grueling work of the downed airmen and their Serbian benefactors to prepare a landing field for the aircraft that would attempt to fly them out of enemy territory to safety in Italy. It also chronicles the efforts of the OSS (the U.S. Office of Strategic Services, an agency that specialized in clandestine missions) to save the men. All the characters in the book are based on the real people who carried out the operation.

The first chapter narrates the shootdown of Miss Caroline, the U.S. B-24 Liberator piloted by Bill Bogdonavich. Parachuting into Serbia, then part of Yugoslavia, Bogdonavich is helped by locals. Because he speaks the language (his father was a Serbian refugee who immigrated to the U.S.), Bogdonavich becomes an interpreter between the large number of Allied personnel — downed during earlier sorties — hiding on area farms and the locals trying to help them.

The point of view in the remaining 35 chapters alternates among Bogdonavich, Lieutenant Drew Carlton (a rescue pilot), and Vasa Petrovich (a Chetnick helping the hidden airmen). The reader gets one viewpoint per chapter until the action speeds up in the last third of the story. From then on, the point of view switches multiple times within a single chapter.

The narrative tension escalates as the men struggle to secretly build by hand a landing field capable of handling multiple aircraft arriving in the dead of night. The airmen and their Chetnick supporters know that if the nearby Nazis discover them, they’ll be sent to concentration camps, turned over to the Gestapo, or killed outright. Hence, the makeshift airfield must look to overflying Germans like any other stretch of farmland. Detection could mean death.

One of the chilling details of the story is the presence of the L-pill. (The letter “L” presumably stands for “lethal.”) It was a cyanide tablet designed to kill quickly, thus allowing its swallower to avoid the pain of being tortured to death — and of revealing sensitive information in the process. All the air crew carried one.

Author Young is a pilot and a decorated air combat veteran who flew in Afghanistan and Iraq. His easy familiarity with aircraft and flying make the text of Red Burning Sky realistic and credible. His writing style is casual and self-effacing so that the reader’s full attention is focused on the plight of the men and their struggle to escape without the distraction of ungainly prose.

To my surprise, the most interesting and believable character in the book was 17-year-old Vasa Petrovich, a Serbian native and Chetnick who, in the course of the story, loses everything. His family and fiancée have disappeared and were probably killed in the fighting, and his hometown falls under the control of Tito’s Partisans. He’s left with a daunting decision about where to go next.

Despite the unusualness of the book’s approach — retelling a true story entirely via invented characters rather than mixing real and imagined ones — Red Burning Sky works. Even though I’d guessed the ending after the first few chapters (and Operation Halyard is easily searched online), the suspense stayed with me to the finish. And I rooted for the Serbs and the airmen every step of the way.

Tom Glenn, one of our most frequent reviewers, is a full-time author with six books of fiction and 17 short stories in print. Much of his fiction is about Vietnam, where he spent the better part of 13 years supporting friendly forces on the battlefield with signals intelligence before escaping under fire when Saigon fell.

Joy-riding on back roads in a modern retelling of a familiar story from the Gospels.