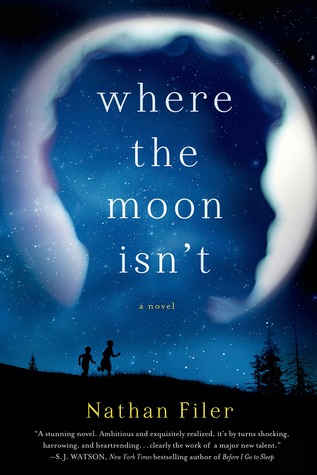 You’re Matthew and the world is spinning by faster than the view from a train and you see the foolishness and hypocrisy of the adult world around you and you hurt and you want to make it stop but you can’t. So you hide with your guilt and your secrets and you flounder and, step by step, you search.

That is the essential story in Nathan Filer’s heart-wrenching debut novel, Where the Moon Isn’t. Matthew and his older brother sneak out in the middle of the night, but things go awry and only Matthew comes home. Well into his adult life he wrestles with the events of that night and his guilt for having caused them.

There seems little hope of survival, let alone resolution: Matthew suffers parents whose grip on life is tenuous and fraying, social workers who understand his reality as poorly as he does theirs, friends who rival himself in self-destructiveness and isolation, and a debilitating despair over the loss of his beloved brother, who had been his sole source of unconditional love and whom he can only embrace in the depths of hallucinatory sorrow.

This is a tale told beautifully in the innocent voice of a perennial child and misfit — an unreliable narrator whose focus rapidly and unexpectedly shifts in time and place. Filer deftly paints a series of vignettes of Matthew’s chaotic search for solace that successively unveils the mysteries surrounding his brother, his own failed attempts to grow up, his mental illness, his troubled family history.

What is uplifting about this story is that although Matthew never resolves these many deficits, in his own idiosyncratic and fumbling way he is the one who eventually grasps what he needs to do. Acting on what he has discovered within himself, he finds the way to heal, to let go and to move on.

The writing, the story and the protagonist all charm with their simplicity and endear with their genuineness. You won’t want to miss this one.