When Truth Is All You Have: A Memoir of Faith, Justice, and Freedom for the Wrongly Convicted 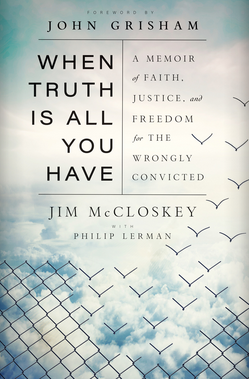 If you’re reading Black Lives Matter-related books about the role of police or white blindness to social problems, this timely book is one for your list.

As Jim McCloskey of Centurion Ministries tells his stories of freeing wrongfully convicted persons all over the nation, we learn that witness perjury set up by police and prosecutors and police perjury on the stand are pervasive. We’re not talking “a few bad apples.”

For the rest of my days, I will remember the passage from When Truth Is All You Have in which a Newark police lieutenant, a 25-year veteran of the force, tells McCloskey that he doesn’t know a single officer who hasn’t lied on the witness stand.

McCloskey acknowledges that police work is dangerous and difficult, and many good people do it. Most Americans agree. Many of us have honorable friends and family members who serve. The problem is not individuals, but a long-existing “ends justify the means” ethos. “They lie, so we lie,” the officer told McCloskey.

In the book’s foreword, noted author John Grisham calls McCloskey “the Exonerator” for freeing 63 people, 23 of them on death row. Grisham, who has vocally and financially supported innocence projects and even written a nonfiction book about one such case, says:

“There are thousands of innocent people convicted and locked away in prison. Most Americans, or most white ones anyway, do not believe this. Those with darker skin know better because they have seen and lived this reality.”

McCloskey began what would become his life’s work while studying at Princeton Theological Seminary. He was assigned an internship at New Jersey’s Rahway State Prison. At the time, he tells us, “I still believed in the inherent justice of the criminal justice system — that cops had no reason to lie. That prosecutors would never want to put an innocent person behind bars, that judges were interested in the truth, the whole truth, and nothing but the truth.

“What I have seen over the last 40 years has shown me the exact opposite.”

In his first weeks of visiting the prison, McCloskey discovered that almost all inmates admit their guilt. Some even brag of their misdeeds. He had anticipated the opposite. Like mine, his mental image of prison and prisoners may have been formed by old Warner Brothers movies on midnight TV. In such films, every prisoner insists he’s innocent — usually in a broad Brooklyn accent.

McCloskey meets Jorge “Chiefie” de los Santos, who was serving a life sentence for murder. Chiefie said he was convicted on the word of two men who lied because they’d made deals with the prosecutor.

McCloskey didn’t believe him. He just didn’t think that could happen. But Chiefie, and then his wife, kept saying it was true, so McCloskey began investigating.

At Chiefie’s trial, the witnesses themselves, a police officer, and the prosecutor had all insisted the two witnesses were strangers to one another and to Chiefie. McCloskey discovered that the witnesses had known one another all their lives; their elementary school principal even showed him records of the two in the same fifth-grade class.

About this time, McCloskey came to believe God was directing him toward finding justice “for the least of these.” With no legal training and no money, he founded Centurion Ministries. All he had was his doggedness and, as the title of the book says, the truth.

After a lot more digging and three years, Chiefie walked out of prison and into his wife’s arms.

Think for a moment: If police asked where you were at nine o’clock last Thursday night, what would you say? Who would back you up? For most of us, it would be a family member. While certainly there are wives and grandmothers who lie to protect a loved one, not all do. Yet we learn judges and juries routinely wave away such individuals’ sworn testimony.

Consider the Massachusetts case of Mark Schand, awarded $27 million for his wrongful murder conviction, a million for each year he spent in prison. At the time the crime was being committed, he was 30 miles away, picking up his wife from the hair salon where she worked. Six witnesses, both employees and customers, testified to that. Several mentioned that Schand was quite obviously in pain from a root canal he’d just undergone. The dentist testified, too.

Instead of relying on the word of those seven people, however, the jury convicted Schand on the cooked-up testimony of two jailhouse felons.

Even signed confessions are not necessarily proof of guilt. McCloskey notes that among 367 cases in which a defendant was exonerated by subsequent-to-the-trial DNA evidence, one in four had signed a confession. Browbeating works.

Really, it all makes your head spin. And your heart heavy.

As I read, I began to see how McCloskey differs from most of us. It’s not just how he’s spent his life, it’s his lack of cynicism. Here we have a man who sometimes errs, who sometimes is deceived, and still is inclined to believe people until it’s proved he should not.

Would that our criminal justice system did the same.