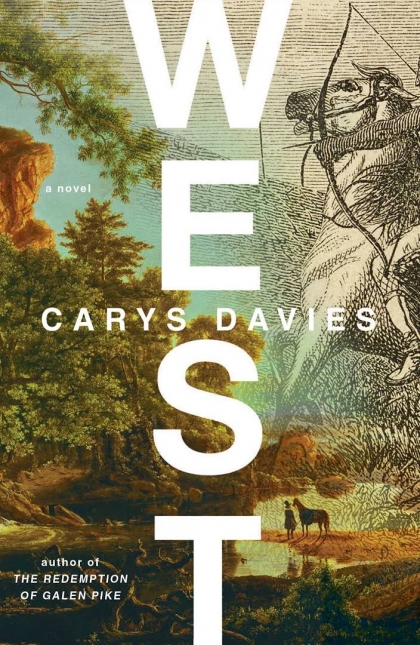 Few landscapes have been as mythologized as the American West. In 1893, at the Chicago World’s Fair, Frederick Jackson Turner first gave voice to his Frontier Thesis. He argued that America has been defined by the ever-westward shifting frontier, an idea that has forever changed the way Americans understood their unique history.

How interesting, then, that the acclaimed Welsh writer Carys Davies has chosen the American frontier as the subject of her debut novel. What might an outsider’s perspective of the iconic West look like?

As in a lofty Bierstadt painting, Davies’ slim novel, West, presents a landscape of mystery and longing, of possibility and the hunt for the impossible.

Electrified by reports of massive bones unearthed in Kentucky, widower John Cyrus Bellman embarks on a multi-year odyssey across the American continent. It’s in the western realms of America, in those blank spaces on the map, that he endeavors to find the “animal incognitum” still alive in a vast and shadowy domain.

Bellman leaves behind his only daughter, Bess, with his sister. A Marilla Cuthbert-esque character, Julie is a childless spinster living with her brother. She inherits a child she never asked for and does not understand. But unlike Marilla, Julie doesn’t appear to be up to the task of motherhood. As if in accusation, the narrator notes that the only book Aunt Julie owns is the Bible.

When I read West, I couldn’t help by be struck by how often Davies seems to be writing not about frontier mythology but rather about its authorship. It is Bellman who populates terra incognita with giant, elusive creatures that are “entirely unknown.”

When communicating with Native Americans of various tribes, he uses sticks to draw images of his own devising. He gesticulates toward the towering cottonwoods to relate his fantasies, to make them real. And when the native people shake their heads to indicate they know of no such monsters, Bellman ignores them, believing only that he has not traveled far enough.

Bess is her father’s daughter. She finds comfort in telling a friend about her father’s journey over and over. She, too, is a storyteller. But she is also a listener who is captivated by the tales she is told.

Unlike Aunt Julie, who sees no value in books, Bess overcomes several obstacles in order to access the local subscription library. Not only does she study the same maps her father did, but she also reads books about Greek mythology — perhaps a wink from Davies that we are indeed plumbing a new, distinctly American myth.

Perhaps this boy, who lacks the language needed to converse with Bellman, will be able to understand in other ways. Their evolving relationship is one of the main drivers and most interesting aspects of the novel.

Davies’ background in short-story writing is evident. This recent Frank O’Connor Short Story Award-winner has a succinct, precise, and even lyrical style of writing. At 149 pages, this is a book you could read in an afternoon. But you won’t want to. Davies’ prose is something you’ll want to savor.

I suppose it should be no surprise that she wrote this novel as the Cullman Fellow at the New York Public Library, surrounded by books.

Suzie Eckl supports her reading and writing habit with a day job in television program development in Washington, DC. She was recently awarded an artist grant through DC’s Commission on the Arts and Humanities and is working on her first novel.