Wealth Secrets of the One Percent: A Modern Manual to Getting Marvelously, Obscenely Rich

Spoiler alert: The game is rigged. 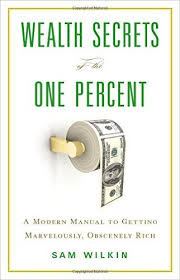 Bloomberg recently reported that investment banker Jamie Dimon, famous for piloting JPMorgan through the financial crisis of 2008, had joined the so-called billionaire club with an estimated net worth of $1.1 billion.

That sounds impressive, but it's peanuts compared to hedge fund heads like George Soros, with $23 billion; Mexican telecom mogul Carlos Slim, with $72 billion; Bill Gates, with $79 billion; or the infamous Koch brothers, who sit atop an industrial empire that has brought them a combined fortune in excess of a whopping $100 billion.

Even that eternal explanation for runaway success — luck — with its mystical overtones and maddening inexactness, hardly dispels the mystery, unless we believe that a businessman can be a million times as lucky as his competitors.

So what does account for such tremendous accumulations of wealth?

This is the question Sam Wilkin, an economist at the research consultancy Oxford Economics, takes up in his new book, Wealth Secrets of the One Percent. For the layman, massive disparities of wealth come across as moral dilemmas. But to an economist, they represent a theoretical puzzle.

In an ideal market, competition quickly bites into profits, as any small-business owner soon discovers. You spot a market niche, you open your business…perhaps your town still lacks a movie theater. It's a sure thing that if your theater does well, another will soon open up across the way. And another, and another, until the market is saturated and your revenues are torched.

This suggests that large fortunes really shouldn't exist, much less the Brobdingnagian fortunes of big-business superstars. Call them great men, if you will. To the eggheads and the pencil-pushers, they're economical aberrations.

Certainly there's been no shortage of writing lately on the subject of inequality. Most of this literature has been generalist in scope. Among novelists, economists, journalists, and Vox wonks, it's all been about the Big Fat Trends.

The standard-bearing book of this type is Thomas Piketty's Capital in the Twenty-First Century, which built on a hundred years of transatlantic data to make bold, culture-shifting predictions. At nearly 700 pages, with a scope encompassing all of recent Western history, Piketty's study used reams of research to produce a mathematical thesis statement that, printed in standard type, would literally fit in a nutshell.

Wilkin's approach is rather different and much friendlier to the average reader. He's interested in the outliers, the wild cards: Gini-coefficient-busting money-gluttons so far toward the end of the Pareto distribution that they'd get kicked out of a careless regression. Not the one percent, as his title suggests — the .001 percent.

With a sample that's by nature both small and bizarre, Wilkin eschews data analysis for a method not much in vogue these days: comparing case studies.

The book opens with two examples of wealth empires that didn't pan out: the recent failure of chain store Circuit City, and the collapse of the hedge fund Long Term Capital Management. Wilkin uses these stories to illustrate the perils of competition, showing that in a truly free market, even geniuses can't get ahead.

He then moves on to cover famous cases of extreme wealth concentration: the Roman plutocrat Crassus; the Gilded Age of the American robber barons; the Indian industrialist Dhirubhai; the S&L crisis; the modern financial industry; and Bill Gates.

Many of these are, to say the least, oft-told tales, and an astute reader of the footnotes will find himself tripping over several familiar names: Lowenstein on LTCM, Thiel on startups, Sorkin on investment banks.

Still, this is at heart a theoretical book, not an historical one. Its merit lies not in the stories it tells, but in the connections it draws between them. When you get right down to it…well, there's no easy way to say this. Wilkin delivers the promised seven secrets, but they mostly boil down to one big idea: that bloated personal fortunes are the result of state-backed monopolies.

Sometimes a government hands out special licenses, giving a few chosen businessmen control of key industries. Sometimes a government provides subsidies or guarantees, allowing a lucky cohort of investors to sport with state-insured money. Sometimes, it enforces patents and copyrights that build monopolies around intellectual property. (Google may insist your information should be free, dear user, but its money-making algorithms are protected by law.)

And sometimes, as Wilkin relates with relish, a government simply picks a winner and hangs all would-be competitors. Yes, from the gallows.

That's the big secret: friends in high places. Either that, or a whole lot of lawyers.

As business books go, Wealth Secrets is something of a tease. The title and introduction suggest a kind of manual for greedy dreamers, pitched at the budding James Gatzes of the world. Yet anyone looking for actionable advice is likely to feel not only disappointed, but emotionally mistreated. I can hardly think of a less inspiring read for a wannabe mogul. Perhaps sensing this, Wilkin sometimes strains to soften his argument and lighten his tone, as if a tad leery of his own grim thesis.

Indeed, as the pages go by, the various stories he tells begin to seem — how would a kindergartener put it? — so unfair. But before we take up our pitchforks and march on the Federal Reserve, consider.

The most obnoxious cases Wilkin cites are from the past or from foreign countries. As for the U.S.’ weird monetary system, it's mostly set up to do two things: reward lucky people for taking huge risks, and protect unlucky people against catastrophic failures. Hence, we have patents that pay ridiculous dividends for good ideas. We have generous incentives for investment, plus relatively gentle bankruptcy laws. We have expensive entitlements and pampered banks.

The result is a culture of frenzied speculation, a country of merry grasshoppers and hard-pressed ants, where losers get free money, winners get even more free money, and everyone thinks everyone else is getting away with murder.

It may not be pretty, but that's America.

A science journalist offers up a passionately researched book on a gloomy topic, but leaves space for hope.