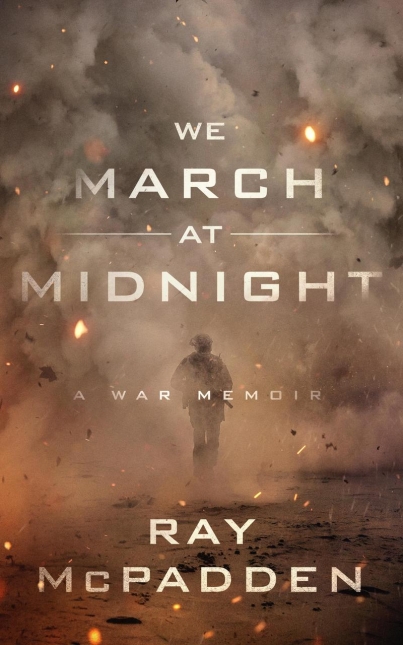 This is a true story of an American warrior in Afghanistan and Iraq from 2006 to 2009. I was reading it as the press reported that the Taliban had seized Afghanistan and that an ISIS suicide bomber blew himself up, killing 13 American troops and scores of others outside the Kabul airport. The news and my work came together in a sickening reminder: War is brutal and grisly.

The book’s author, Ray McPadden, is a true warrior. He takes pride in his many months on the battlefield. He found killing enemy fighters satisfying, even pleasurable. His scathingly honest recounting of everything from skirmishes to full-scale battles is grim and detailed.

McPadden sets the tone in his prologue. “We are infantry,” he writes, describing a search for bodies after a skirmish. “And when Boys get killed, you don’t go to base for a week and cry it out. You punch back.”

We March at Midnight follows McPadden from Fort Drum, New York, in the fall of 2005 to the Hindu Kush, a mountainous region of eastern Afghanistan in Kunar Province close to the Pakistan border. He is a junior lieutenant commanding a platoon of 43 men. Throughout the text, he refers to his subordinate enlisted men as “the Boys,” always capitalized. His job, as he describes it, is to “snatch ground from the enemy, platoon by platoon, in the floodplains along the muddy river.”

The war in Afghanistan as McPadden portrays it sounds very much like the war in Vietnam as I experienced it. The enemy avoids combat until it is to his advantage. Ambushes and sniper fire are among their most common tactics. And like the one in Vietnam, we eventually lost this war, withdrawing to allow our Taliban enemy to seize the country. Even though McPadden’s narrative concludes in 2009, well before the final defeat, his telling portends the end.

Characteristic of McPadden is his description of striving for “the moment,” the chance to prove to himself that he is a true combat leader. Throughout the book, he is fixated on demonstrating that he and his unit are the best in combat. During his first 15-month tour in Afghanistan, his unit is repeatedly decorated for valor but suffers almost 50 percent casualties.

McPadden’s language all through the book is idiosyncratic, nearly always in present tense, and studded with obscenities. More often than I would have liked, I found myself going back over a passage to be sure I understood it. This is typical: “We snatch ground from the enemy, platoon by platoon”; “We bulled onto the highest peaks and hit the deepest valleys”; and “By chalks, we gear up and toddle into C-17 Globemasters.” Such writing makes the book colorful but sometimes hard to comprehend.

Unlike the men he commanded and even some who commanded him, McPadden is well educated and an avid reader. He graduated from Texas A&M University before he began his military career and remarks on which esoteric books he was engrossed in at various times during it. He mentions almost parenthetically his time in graduate school. And he was already a successful novelist before he wrote this memoir.

Several times during the story of the battles in Afghanistan and Iraq, McPadden mentions monitoring enemy radio traffic and what that effort told him. But Afghanis surely didn’t communicate in English. I wondered if perhaps a signals intelligence unit with linguists was attached to the command McPadden was part of. Elsewhere, he describes what he learned from talking to local Afghans but doesn’t mention interpreters. I was left scratching my head.

The sheer savagery of the war in Afghanistan is underlined by McPadden’s nonchalant descriptions of almost-constant killing and maiming. But also typical is his observation that U.S. money is sometimes the key ingredient in gaining the cooperation of locals. “I am buying peace,” he observes. “It is what you do when you cannot kill your way to peace.” He spends his own money when no government funds are available.

McPadden’s portrayal of a soldier’s motivation in combat matches my own experience: Men fight not for country or out of patriotism or because their cause is just. They fight for each other. In other words, the job of a combatant is to save the life of the man fighting next to him. At the conclusion of an offensive in the Korangal Valley, the author’s commanding officer tells McPadden that his troops were successful because of how they fought. “They did it for you, and me, and each other. No one can ever take it from them.”

Toward the end of the book, McPadden describes the psychological damage combat has inflicted on him. He shows all the classic signs of the Post-Traumatic Stress Injury (PTSI) so typical of men who have served on the battlefield. He notes that those who suffer from PTSI can’t tolerate fireworks, a failing I have observed in myself.

Reading the book confirmed for me one more time that I was never a combatant, even during my military service, and certainly not in the many years I served as a civilian under cover on the battlefield providing intelligence to friendly forces on where the enemy was, his readiness for combat, and his plans. I was not there to kill. I was there to save lives.

But McPadden, as depicted in We March at Midnight, is a warrior through and through. The deaths of men by his side eventually damaged his soul but never made him flinch in the moment. And he killed enemy fighters without hesitation or emotion. Warriors may not be attractive figures, but so long as we face the Taliban, al-Qaeda, and ISIS, we need them.