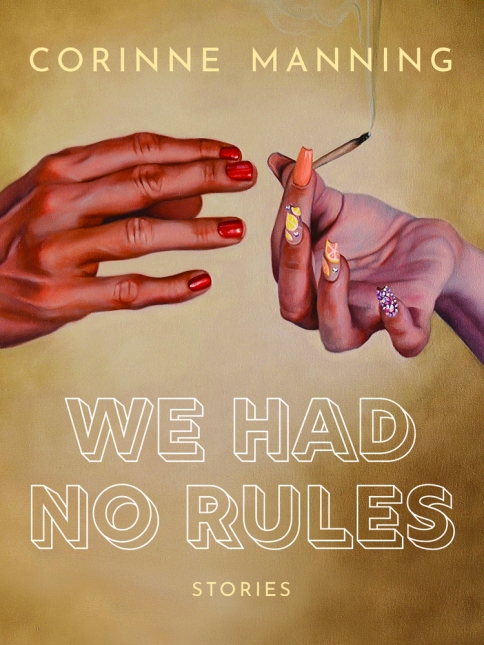 We Had No Rules is an exploration of the opportunities and limits of modern American queerness. Corinne Manning’s collection of short stories looks messiness and complications right in the face, posing the question, “What is the shape of queer life today?”

The collection begins with a kind of story many are familiar with — that of a queer teenager escaping her conservative family for a new life in New York City. But her vision of a utopic future is quickly derailed by an opportunistic roommate, setting a pattern that repeats throughout the book.

The people in these stories all imagine queer life to be free of restrictions and boundaries, free of the confinements of straight, heterosexual life. Almost immediately, though, every one of them runs into a roadblock. They find themselves with family, friends, and partners who want something more conventional, and occasionally, even discover that they themselves want that.

So they charge ahead, breaking the rules and assuming their loved ones will follow, only to find that they have simply acted selfishly and ignored the needs of others. Some of them recognize this, and others have no idea why they’re in trouble.

It’s tempting to categorize the protagonists in these stories as simply people behaving badly. And by society’s usual relationship norms, they are: They cheat, they assault, they abuse power, they willfully misunderstand others’ pain. But they do so under the illusion that they are exploring life’s possibilities. And this is where We Had No Rules’ central thread of conflict arises, a conflict that is a core piece of modern queer life.

Queer people in America have been wrestling for decades with the tension between boundless manifestations of gender and sexuality and the pull to fit into society. It was a constant argument during the marriage equality fight in the early 2000s. Earning this right allows us “respectability” within broader society, but should we fight so hard to be seen as “just the same as you” when, by definition, we aren’t? Do we want to bend ourselves, erase ourselves, to join a system we would rather flout?

Characters struggle with this as they test the limits of the realms they inhabit. In “The Boy on the Periphery of the World,” Brian evades the topic of marriage even after a two-year engagement, to the confusion of his committed boyfriend. The unnamed protagonist of “Chewbacca and Clyde” never married or even pledged monogamy to her partner, Meredeth, and is shocked when Meredeth leaves her after a cheating incident. And the narrator of “Ninety Days” wears increasingly flashy outfits to perform her gender in extreme, a reaction to her attraction to a cookie-cutter marriage.

Characters repeatedly find themselves dragged back into conformity, and many end up asking themselves whether continuing to chase the dream of gender and sexual freedom is worth losing their families and partners over.

These characters encompass a range of ages, genders, and sexualities, but curiously missing are any identifiers of race or class. It seems that everyone is a middle-class white. How strange it is to explore the edges of identity but fail to explicitly include any characters of color, any poor characters, or any disabled characters, especially when it’s queer people with these intersecting identities who are usually the ones pushing hardest on the boundaries and demanding that the larger society see and accept them.

Of course, this “individualism vs. conformity” divide does not always loom as large for queer people of color. A Black trans woman will nearly always have more difficulty fitting into societal norms than a white cis lesbian and may simply never be accepted enough to be forced to choose a path.

I don’t personally know the details of author Corinne Manning’s background, so it is possible they intentionally chose to write what they know, which is commendable in an era where publishing is still filled with poorly handled books by white authors about people of color. Still, by leaving out this entire portion of the queer world, the author winds up examining a very narrowly defined version of the queer existence.

Casey Bridgers is a marketing professional living in the DC area with her spouse and two cats. You can find her and more of her bookish opinions on Instagram at @caseythereader.