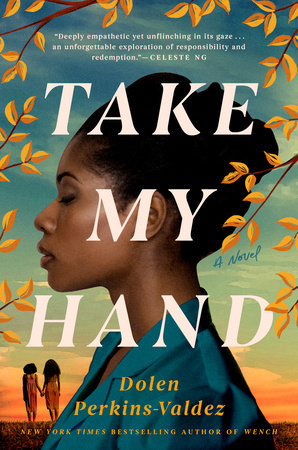 At 67, Civil Townsend is troubled not only by her body’s aches and pains but also the bruises of memory. Her adopted daughter knows the story of her parentage, Civil tells us, but not her lineage, how she came “out of a long line of history that defies biology.” That intersection of biology and the chain of struggles and accomplishments that creates history forms the heart of Dolen Perkins-Valdez’s third novel, Take My Hand.

Civil’s memory skips back more than 40 years to 1973, when she was a young nurse working at a family-planning clinic in Montgomery, Alabama. She came from an elite Black family, her father a doctor, and her childhood surrounded by educated people. She confesses to being “uppity,” saying, “our arrogance was a shield against the kind of disdain that did not have the capacity to even conceive of Black intellect.” Her father wanted Civil to follow in his footsteps, but nursing called to her as a way to be closer to patients.

She quickly becomes very close to one particular family of patients. Her portfolio includes driving around the county to provide family-planning services, and one of her first jobs is to give Depo-Provera shots to two young girls, age 11 and 13. And though Civil assures her father she’s not nosing in their business, the Williams family captivates her.

They live in a dirt-floor cabin that “looked tired, as though a wind had blown it askew and it hadn’t had the energy to right itself.” The girls’ grandmother cooks from an open flame in the one-room space, while their father tries to scrape together a living from the white man on whose land they live.

“Walking into that house changed my life,” Civil says, “And yes, it changed theirs too.”

The 11-year-old, India, doesn’t talk, but her protective older sister, Erica, speaks for both of them. The Depo-Provera needle slides easily into their deep brown skin, and it’s only after Civil has administered the injections that she learns from Erica that the girl menstruates constantly, through her sanitary napkins and without ceasing. And that younger sister India hasn’t menstruated at all.

This revelation is the first blow to Civil’s certainty that she is helping.

Her misgivings grow, and together with an ex-boyfriend, Ty, and other nurses, Civil learns more about the insidious and disrespectful campaign she has stumbled onto, a government-sponsored effort to control Black bodies and eliminate women’s ability to make reproductive choices. The story’s tension heightens as Civil tries to gather allies and information about the clinic’s work. Investigating alongside the sweet Ty is made more difficult by Civil’s own complex feelings about the abortion she had a year earlier, a termination she does not regret but nonetheless mourns.

Civil deepens her involvement with the Williams family, moving them into subsidized housing and getting the girls enrolled in school, but her satisfaction evaporates when the clinic tricks the family into receiving “care” that none of them actually wanted.

This heartbreaking story fictionalizes a real historical case, one link in a chain of the shameful history of state-sanctioned abuses to the health and reproductive rights of Black Americans and other people of color — a legacy that continues, legally, today.

As with her previous novels, Perkins-Valdez is concerned with the autonomy and independence of Black women, though this first foray into the 20th century feels more explicitly drawn from the headlines and, strangely, a little less intimate than her prior work. Perhaps it’s simply the limitations of a first-person point of view, which allows Civil to speak for herself but restricts our knowledge of India and Erica to Civil’s observations.

Still, Perkins-Valdez brings her trademark sensitivity to this compelling novel, and Civil moves between self-righteous anger at the perpetrators of the injustice to a wise understanding of “how a person could get so caught up in doing good that they forgot the people they served had lives of their own.” It’s a lesson Civil herself, caught up in her own missionary zeal, struggles with, and one that dovetails nicely with the book’s complicated conclusion about the importance of self-determination and choice.

“Our bodies belonged to us,” Civil asserts. “Poor, disabled, it didn’t matter.”

It’s a lesson we’re all still learning. As participants in history, we are shaped by the past while shaping the future. The novel takes its title from Martin Luther King Jr.’s reported last words, a quote which also serves as its epigraph: “Ben, make sure you play ‘Take My Hand, Precious Lord,’ in the meeting tonight. Play it real pretty.” The request is a plea to all of us to join hands with one another — with the past and the future — and try, at least, to understand.

[Editor’s note: Dolen Perkins-Valdez will speak at this year’s Gaithersburg Book Festival on May 21st in Gaithersburg, MD.]

Carrie Callaghan is the author of the historical novels A Light of Her Own and Salt the Snow (Amberjack/CRP).