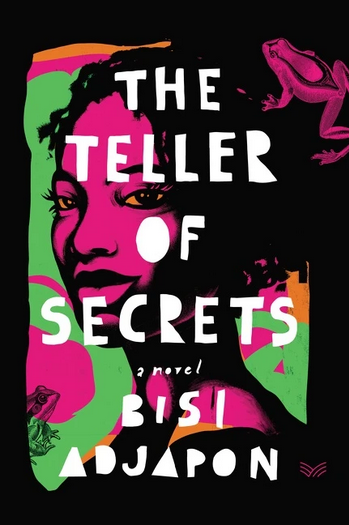 Bisi Adjapon’s stunning debut novel, The Teller of Secrets, offers an intimate look at a growing Ghanian Nigerian girl as she struggles to sustain her dreams and principles within the confines of a postcolonial West African society that favors men.

Although young Esi gets an “egg-under-the-hen feeling” from being her father’s favorite daughter, the smart one for whom he has high hopes, she earns no reward for her intelligence or curiosity. At 9 years old, she must empty “chamber pots full of nose-stinging urine” and get blistered hands from pounding orange-red palm nuts for dinner.

Her overworked stepmother, Auntie, shares little of her existential interests, and Esi’s four half-sisters, twice her age, anticipate nothing more in life than finding and keeping a man. Envious of Esi’s favored status, they punish her in ways she can barely stand, even as they suffer similarly at the hands of the same father and other men.

After a particularly brutal punishment, Esi stretches out in the mud with the frogs because her friend says frogs can turn girls into boys. She considers that she might be better off as a boy. Her younger brother, Kwabena, certainly enjoys an easier life. Esi has watched her father cheat on his wife and twist the truth. Yet the consequences for lying or keeping secrets are different for men and women; for the latter, they’re horrific.

Deepening her pain, Esi and Kwabena were abandoned by their biological mother when Esi was 4. Not only does she yearn for her absent mother, but her Ghanian schoolmates tease her for being “a Nigerian animal” with Chinese-looking eyes. Esi wonders which is worse: being a girl or being Nigerian.

Boarding school, loving girlfriends, and visits to relatives in Nigeria make life bearable. But Esi’s awakening sexuality clashes with her father’s message that “a woman’s glory is her husband.” Undaunted, Esi continues her quest to learn more about her developing body, make sense of the double standard that requires women to dote on men but never the reverse, and navigate the unstable postcolonial politics that threaten her family’s income.

There are victories here and there. At 15, Esi stands up to police by refusing to pay a bribe, astounding Kwabena. And having read about the Western move for women’s liberation, she pushes back when her father opens private letters belonging to her half-sisters or to her, even as those siblings chide her for it.

What does it matter that Esi excels at her fancy schools and has few financial worries if she ultimately has no ability to direct her own life? Her experience mirrors that of Effia, the protagonist of Yaa Gyasi’s Homegoing, a novel set in 1700s colonial Africa. It’s disturbing that, two centuries later, Esi’s world is no better for women.

Author Adjapon’s elegant narrative and terse dialogue draw us in; the pages are filled with sensual imagery of rusty-roofed villages, church steeples poking out from the greenery, mouth-watering crispy fish, and hot yams wrapped in big leaves. The political climate is vividly drawn, too, as is the underlying tension of a place where violence can easily erupt. Esi is strong, humorous, and self-reflective, yet she berates herself often. At her lowest point, she finds clarity:

“Being a woman means being the one who is wrong. That simple. No matter how educated I am, my womanhood will always be the veil [my father] looks through to see me.”

Nonetheless, The Teller of Secrets offers hope. Esi can’t change her father’s heart so must instead honor her own. Eventually, she believes, he will understand. In the meantime, she’ll light up her womanhood and help her sisters in the process, even at the risk of disappointing those dearest to her. It’s not crazy to bet that love can transcend all, despite our differences. In fact, it’s a message relevant not just in 1960s Ghana, but in our polarized world of today.

With a B.A. from Colgate and an M.A. from Georgetown, both in Russian-area studies, and a certificate in fiction writing from UCLA, Anne Eliot Feldman has worked in the Library of Congress and in the defense industry. She’s completing her own debut novel, about the heart-stopping fragility of cacao beans and true love.

Mothers and Other Strangers