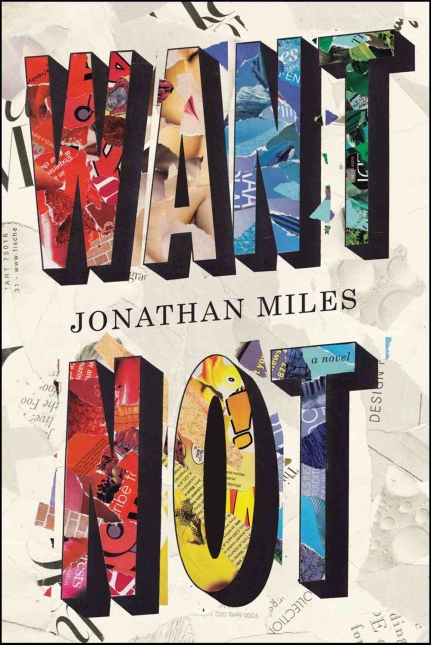 Jonathan Miles’ Want Not, the follow-up to his highly acclaimed 2008 debut novel, Dear American Airlines, is a book of small stories that force the reader to think big about serious questions.

For instance: How each human generation is probably doomed to be certain that this is the shittiest shape the world’s ever been in – which, technically, might make them each correct. Or how it’s the things we throw away – both concrete and abstract – that define us and connect us. Or how these objects are never actually thrown away but are merely passed down to the next generation. Or, finally, how all of society’s physical symbols are simply litter and how we are all ultimately litterers. But the truly haunting question is whether our society itself is just another thing that eventually gets left behind to rot – and what of the smoldering remains of love, which gets discarded, abused and shredded, but never put back together?

In Want Not these ideas swirl about on every page. The themes are, perhaps, more cohesive than the actual storyline, but it works, because the ideas are powerful enough to propel the story forward, weaving through three sets of flawed and sympathetic characters whose stories and lives are all separate until their worlds unexpectedly collide. The results are tragic and incredibly funny.

We first have Talmadge and Micah, a young couple living a freegan existence in Manhattan. Talmadge, as his name probably suggests, comes from Southern money, and Micah has been a wanderer since her Appalachian upbringing off the grid. They meet at Burning Man – of course. Now they’re squatting with Talmadge’s fraternity brother and ex-convict Matty, sifting their way through life, love and dumpsters on that island literally built on trash, where seemingly all our culture’s big questions are answered.

Then we have Elwin Cross Jr., Ph.D., an obese and cuckolded linguist in suburban New Jersey. Professor Cross finds himself navigating heartbreak and helping the government prepare for the demise of civilization, while also bracing for the death of his father, Elwin Cross Sr., a former historian wasting away from – wait for it – Alzheimer’s. Many of the ironies in Want Not are, for better or worse, unsubtle.

Lastly, there’s Dave Masoli, a successful New Jersey payday loans titan and Republican. Dave is the second husband of Sara, and his salvation seemingly lies in his ability to connect with his stepdaughter, Alexis. Sara, who lost her first husband to the 9/11 attacks, receives the best setup of any major or minor character in Want Not, only to be inexplicably forgotten.

Invariably, these characters live off the trash, get rid of it – in the form of lives or belongings – hide it, or decide what the hell to do with it. The debris comes in many forms, but they all create it, and it plays a role in how their lives eventually hurtle toward each other.

Their encounter may not be the tight and tidy hyperlink cinema-esque payoff we’re anticipating. But each of their stories are unique and entertaining enough to stand alone. The point is that they – we – are connected, long before the chance run-ins. The characters are connected by two things: (1) learning that the circle of life is, sadly, a simple function of input and output, and (2) upon accepting that the output is ultimately trash, being left to decide what is salvageable. Even knowing already that the answer is love and acceptance, this motif never really gets old in literature.

So what of all this trash? Well, the feel of the book is far from filthy; it, however, makes us aware of the threatened doom of our civilization without actually mentioning it. This is a fantastic technique that allows Miles to show us a dystopian future without actually taking us to a dystopia – or the future. The present is freaky enough.

Want Not might once have been considered unconventional. But now we’re in the post-David Foster Wallace, post-Jonathan Franzen’s Freedom golden age of mixing the high and lowbrow in works that lean heavily on pop culture but still deliver the strokes of “serious literature.” As disjointed and at times incomplete as it is – even accounting for its portmanteau structure – Want Not does this all in gorgeous passages that occasionally border on genius. To quote only a few of them wouldn’t do it justice.

Sometimes the social commentary feels like drive-by hits that deserve further meditation – the world’s breathtaking levels of inequality; the unsustainable nature of how we get energy; and the fact that most health problems in the developing world are from malnutrition, while almost all in the developed world are from overnutrition are topics that probably all deserve their own treatises from Miles. But at least the reader’s mind is left spinning.

If there is a modern book that more artfully allegorizes the desperation and anxieties of the human condition through the lives of normal people, this reviewer hasn’t come across it. Miles gives us the long view – the “big picture” – without having to go long, or big. With such simple, yet sprawling, beautiful and hilarious sentences, one can hardly imagine a world where art like this has disintegrated into ashes, radioactive trash heaps or stardust.

J. Grigsby Crawford is the author of The Gringo. He grew up in the great American West and resides in Washington, DC.