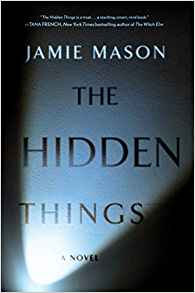 What makes a reader turn the page? Certainly, it’s to find out what happens next. And once the last page has been flipped, what makes a story memorable? Many people would say a satisfying ending. And how about an interesting villain and an array of flawed, surprising heroes?

The Hidden Things by Jamie Mason checks off all these boxes.

The story begins with home-security footage that goes viral. It’s the video that launched a thousand (slight exaggeration) complications in the lives of John Cooper (spoiler alert: not his real name), his wife, Donna, and his 14-year-old stepdaughter, Carly.

Actually, the catalyst for the story happens before this, when art treasures are stolen from a museum in Boston.

On her way home one day, Carly is attacked by a young man who forces his way into her house. She shocks herself when she finds the strength and courage to fight him off and escape. This is a special young woman, a fact that is clear from the very beginning of this story.

The problem with the video going viral is that Carly and her mother didn’t know John installed cameras inside their house. And they didn’t know that one of the priceless paintings stolen from the museum is hanging in their hallway.

You see, John Cooper is actually Jonathan Spera. He has set up a fake life. His quotient of creepiness is off the charts. That Mason also gives the reader moments which inspire compassion for him is a testament to her skill as an author.

The chapters of The Hidden Things alternate points of view among the main characters. While this technique may seem a bit jarring at first, it ultimately succeeds in making these characters unforgettable.

Mason’s skill in crafting plot is matched by her expertise in fashioning dialogue. When John tries to explain why he installed cameras in the house without telling anyone, his wife responds, “Wow. No. Stop. Do not make the word listen or my name sound like you think I’m being unreasonable.”

Readers may want to file that gem away for use in a future argument of their own. And the next time readers think about ordering soda, they might want to recall this succinct assessment of the ephemeral joy of Coca-Cola: “The sweetness was outpacing the wet in the third sip.”

The video of the attack includes the briefest of glimpses of the missing painting. This is enough for Emma O’Connor (spoiler alert: not her real name) to discover where Jonathan, her old partner in crime, is hiding himself and the stolen treasure.

Emma’s face is horribly disfigured. She was shot on the night of the attempted sale of the painting by Roy Dorring, a man with a heartbreakingly hardscrabble life who has been victimized and abused by Jonathan for years.

Also present that evening was Owen Haig, a suave giant who works for the wealthy art collectors who still want to buy the pilfered painting.

Emma finds her way to Carly and, in a vivid, visceral, terrifying, and fascinating scene, verbally defends Carly against a fellow classmate who is using Carly’s new fame as a bad-ass survivor to humiliate her.

Carly is a young woman who begins to know herself as an adult in the course of a horrifying trial by fire. In the midst of her stepfather growing ever more unhinged, her friendship with Owen is surprising and touching.

Owen is a debonair muscle-head with a fancy-schmancy car that he values more than just about anything. And he is also a person with stunning self-awareness who understands that Carly has a future that deserves much more than the appellation “bright.” When she asks him if they will ever see each other again, he tells her:

During his combat with Jonathan, Owen describes Carly as “karma’s own little spatula.” If this phrase doesn’t make it into the popular lexicon, there is no literary justice in the world.

The sections in which the focus is on the characters’ thoughts rather than their actions are involving at times and, at other times, frustrating. Characters disappear from the narrative and then come back. This can occasionally render the flow of the story hard to follow. But deeply moving scenes such as the one in which Emma connects with Roy, the man who almost killed her, make these quibbles all but irrelevant.

And the epilogue of The Hidden Things alone makes turning every page along the way well worth the journey.

Heidi Mastrogiovanni is the author of the comedic novel Lala Pettibone’s Act Two (finalist for the Foreword Reviews Book of the Year Awards) and the sequel, Lala Pettibone: Standing Room Only (Amberjack Publishing). A dedicated animal welfare advocate, Heidi lives in Los Angeles with her musician husband and their rescued senior dogs.

Gods of Howl Mountain: A Novel