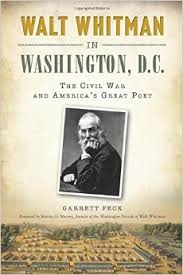 The Civil War stoked a midlife crisis of national proportions for Walt Whitman. When Confederate forces opened fire on Fort Sumter on April 12, 1861, Whitman was going on 42 and had left New York only twice. He had published three editions of Leaves of Grass, but none of the books had the critical or popular impact he so desired.

He was ready for change.

And so, by December 1862, Whitman found himself in Washington penniless (he was pickpocketed on the train ride down) and ready to help, if too old to enlist. After years of irregular employment in Brooklyn, he secured a day job with regular pay. More significantly, he became heavily invested in his volunteer work in Washington’s hospital tents.

Whitman acted as a “one-man United Services Organization,” supporting wounded soldiers psychologically and emotionally with an encouraging word, a loving touch, tokens of affection, and his own salubrious presence.

The letters he penned in the name of disabled veterans are among the most stirring documents of the Civil War. And the poems he wrote at the time became Drum-Taps, praised as the finest collection of war poetry by an American.

Whitman discovered himself in Washington. He also found true love — a reason to stay in DC until a series of strokes and his mother’s death compelled him to move in with his brother in Camden, N.J., in June 1873.

In Walt Whitman in Washington, D.C., Garrett Peck leads readers through Whitman’s game-changing decade in the capital city. Peck’s training as an historian and people skills as an established DC tour guide come together in this volume, which reads like a well-researched guidebook.

His enthusiasm for the topic contributes to the accelerated pace of the narrative: Expect an energetic introduction, but not many pauses to contemplate the view. Though Peck dug into the archives to tell this tale, his Whitman still walks the District’s streets thanks to guidance received from Martin Murray (founder of the Washington Friends of Whitman and author of the book’s foreword), Kim Roberts (editor of Beltway Poetry Quarterly and contributor of the revealing “Map of Whitman’s Washington Boarding Houses and Work Places”), and several others personally invested in raising awareness of the city’s importance to the poet.

More than 60 thoughtfully selected images animate Peck’s clear, straightforward descriptions. Even in our digitizing, globalizing world, there is still nothing like “being there,” and Peck is really there in Washington, both in mind and body, lending his book authenticity and a refreshing dose of sincerity.

Four of Peck’s six books are invested in the capital city’s history, and he is noticeably pleased that Whitman was, as well, going so far as to claim the poet “fell in love with the city.”

Though Whitman certainly found a place in his heart for Washington, the city was not one to romanticize. Peck vividly depicts its unpaved streets, unfilled swamps, and unfinished buildings (including the dome-less U.S. Capitol) that were background to rows and rows of hospital tents and constant caravans of army wagons.

His use of the second person brings us right into these scenes: “Washington was a city you could walk across in an hour or two.” We are with Walt, too, in his hospital visits, reassured by his external calmness and bear-like appearance, but unnerved (as was he) by the raw, shocking scenes that constantly presented themselves.

“I never before had my feelings so thoroughly absorbed to the very roots, as by these huge swarms of dear, wounded, sick, dying boys,” Whitman confessed to his brother; such aptly selected quotations help Peck humanize the poet’s larger-than-life persona.

Whitman never wrote love poems to DC as he had to his “Mannahatta,” but Washington was the only place where he fell deeply in love — twice.

Walt Whitman in Washington, D.C. stands out for its informed and sensitive portrayal of Whitman’s relationship with Peter Doyle, a former Confederate soldier 24 years his junior. Although Peck comes to the topic of Whitman’s sexuality cautiously (“Whitman is widely accepted as being gay”), he clearly identifies Doyle as “the love of his life.”

An entire chapter (“Of A Youth Who Loves Me”) traces the development of the romance that would eventually soften into a lifelong friendship. Peck’s account of their first meeting aboard a dimly lit horse car is one of the finest storytelling moments in the book.

Though “Pete the Great” traverses a good part of the book. the other recipient of Whitman’s deepest affection has less of a presence. Peck notes that Whitman “came to appreciate [Abraham Lincoln] and love him, even though the two men probably never met.”

Yet the platonic nature of the poet’s passionate devotion to the president is what makes this “romance” so intriguing and such a worthy juxtaposition to Whitman’s bond with Doyle. Peck offers readers key quotes — including Whitman’s disarmingly direct admittance, “I love the President personally” — but misses the opportunity to contrast Whitman’s two great loves, who neatly represent the two sides of some of his favorite poetical debates: worldly versus spiritual, physical versus intellectual, reality versus dream.

Walt Whitman in Washington, D.C. is keeping good company in bookstores this year, as the nation celebrates the sesquicentennial of the Civil War’s end. Susan Lawrence’s Civil War Washington: History, Place, and Digital Scholarship, with its accompanying website, allows readers to experience the war-torn city through words, images, maps, data, and a blog; the book includes the beautifully written essay “Whitman in Civil War Washington” by Whitman scholar Ken Price.

Though lay readers may eventually explore the resources of this impressive effort, Garrett Peck’s Walt Whitman in Washington, D.C. is a more accessible (and portable) guide to Washington’s role in the poet’s life and art.

Karen Karbiener is a Whitman scholar at NYU. Actively engaged in public scholarship in New York City, she is working on a book entitled New York’s Walt Whitman.